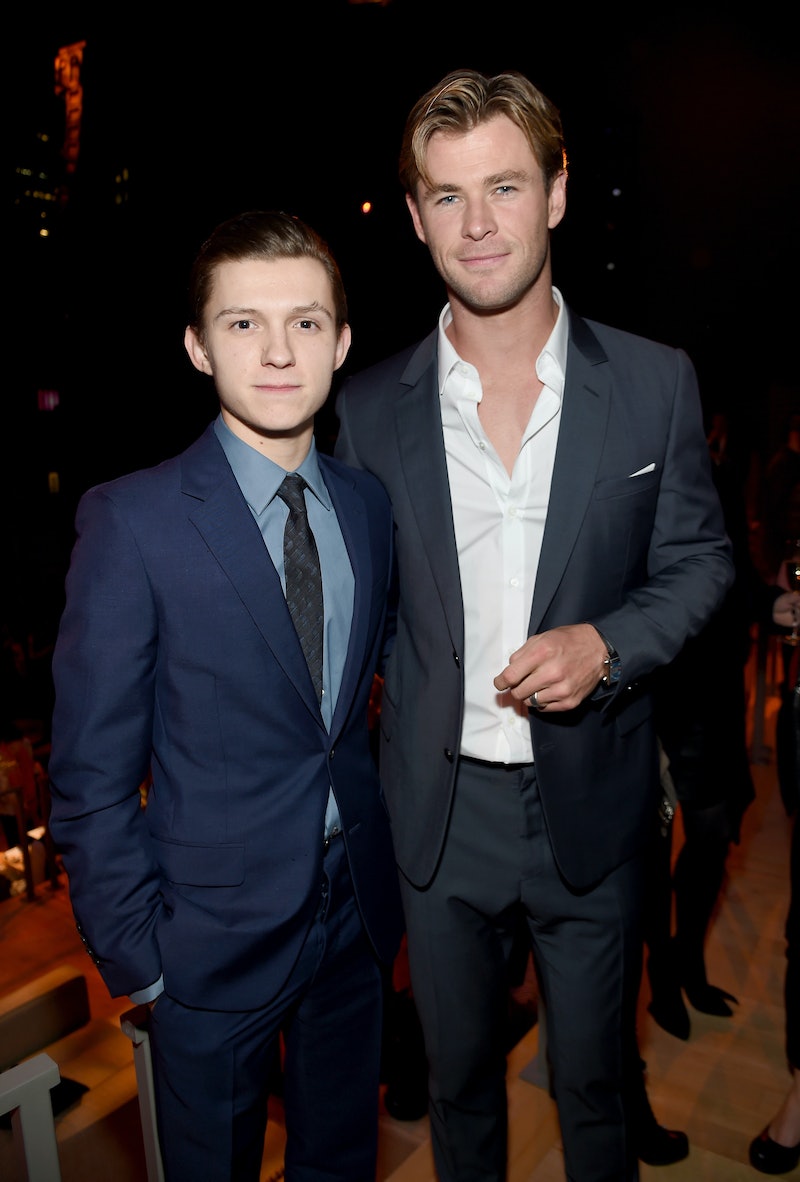 If you're a big fan of Marvel's friendly neighborhood Spider-Man, then you might want to send an Edible Arrangements to Thor, himself. Apparently, Chris Hemsworth helped Tom Holland become Spider-Man. And, according to Hemsworth, all it took was a quick phone call.

At the New York City premiere of Men In Black: International, out June 14, on Tuesday (June 12), Hemsworth told Entertainment Tonight that he had a hand in Holland getting his current superhero gig. It's all thanks to their pre-MCU movie together In The Heart Of The Sea, a whaling tale which ultimately inspired author Herman Melville to write Moby-Dick. In it, Holland played Thomas Nickerson, a young crew member who survived a whale of a tale, and it seems he impressed Hemsworth so much that he was willing to use his connection to the MCU to help him.

Of course, Hemsworth is too nice to take all the credit telling ET, "I mean, look, we worked on In the Heart of the Sea together, obviously, then through Avengers and as they were casting him for Spider-Man, I did what I could do and made a call and said he's one of the most talented people I've worked with and has such a big heart and appreciation."

On-screen Holland's Spider-Man has spent more time with Iron Man, but offscreen he and the actor who plays Thor have a strong bond. "I don't know," Hemsworth said, "we have a great friendship, it's a good mutual respect."

And that respect has been there since the very beginning. While doing press for 2015's In The Heart of the Sea, Holland gushed about Hemsworth to Collider. "I’m a massive Thor fan," he said and after seeing Thor: The Dark World he admitted with a laugh, "I’ve just been buggin’ him with questions. He’s cool, he’s answering it."

Later Holland said that Hemsworth offered him a helpful piece of advice when he did get the Spider-Man role. "Once I got cast [as Spider-Man] he sent me a really lovely email about just make sure you keep your feet on the ground and you don't let this affect you," Holland told E! News in 2016. "You keep your family and your friends close, and that's exactly what I've done."

The guys' friendship isn't just inspiring, it's also a lot of fun. A new video has Hemsworth and Holland interviewing each other for the release of their respective summer films, MiB: International for Hemsworth and Spider-Man: Far From Home, which hits theaters July 2, for Holland.

"Tell me about Spider-Man, why wasn't Thor in that one?" Hemsworth asks in the clip Holland posted to his Instagram earlier this week, right after calling the web-slinging actor Tom Hiddleston.

Don't worry, Holland gets the last laugh when he says that his favorite actor is Liam Hemsworth. Oh, and he thinks Westworld's Luke Hemsworth is pretty good and India Hemsworth, Chris' daughter has a lot of promise. Basically, Holland's a big fan of all the Hemsworths not named Chris.

Spider-Man fans, on the other hand, will always have a spot in their hearts for Chris Hemsworth.