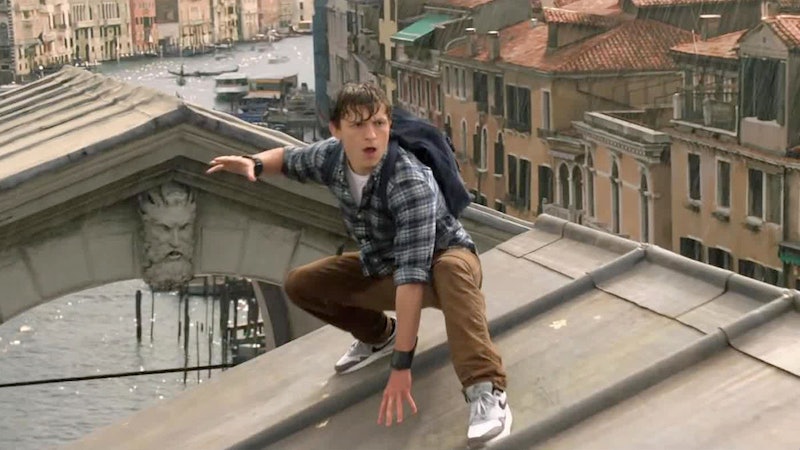 Major Avengers: Endgame spoilers ahead. While the final battle in Endgame was not without significant loss to the MCU, it did, thankfully, unsnap our missing heroes, including and not limited to one very confused Spider-Man. However, with five years having passed since the initial snap, many fans may justifiably wondering just how old Peter Parker is in Spider-Man: Far From Home — particularly because co-producer Amy Pascal revealed as far back as 2017 in an exclusive interview with Fandom that Far From Home will begin just "minutes" after the end of Endgame, canonically. Well, strap in folks, because although the answer to that is pretty simple, the conditions around it are a little more complicated than you think.

As for Peter Parker's age in the current timeline, Endgame makes it clear in the brief interaction that Peter Parker has with Tony Stark during the final battle with Thanos that for the people who have "snapped," five years haven't passed. In fact, it all seems to have been a blip for them. Since Peter Parker was a 15-year-old sophomore in Spider-Man: Homecoming, and Infinity War took place a year later, he would be a 16-year-old junior in high school — it's safe to assume, then, that the jaunt to Europe with his classmates would take place between his junior and senior year. Since we know from the Spider-Man: Far From Home trailer that Peter Parker's birthday is Aug. 10 (at least in the MCU), that would make him — biologically speaking, at least — 16 at the start of the summer, when Far From Home begins.

That part is simple enough, but there is a complicating factor — namely, that while Peter was snapped, we can assume half of his classmates weren't. While we see Ned at the end of Endgame in high school with Peter, and can see based on the trailer for Far From Home that fellow classmates Michelle, Flash, Betty, and the others on the trip are still Peter's age — assumably "snapped" as well, since they're all still 16 or 17 — it stands to reason that half of Peter's school friends are now 21 or 22, per the timeline. It also stands to reason that a bunch of kids who would have been in 11 or 12, in elementary school or junior high, when Peter and his classmates were snapped, are now the same age as them, and in their classes. Basically, high school is baseline confusing enough, and being in the MCU makes it approximately five times worse.

What remains unclear is whether or not these new age gaps will be addressed in Far From Home, particularly in that half of Peter's former and new current classmates will have memories of the fallout from Thanos that Peter and his "snapped" friends don't have. One thing's for sure, though — whatever the circumstances are, Peter Parker is reluctant to bring his Spider-Man persona to Europe, implying that he needs some kind of break. Whether this has to do with the aftermath of Endgame, the stress of trying to acclimate in a world that's been moving on for five years without him, or regular old-fashioned teenage superhero burnout is yet to be revealed.