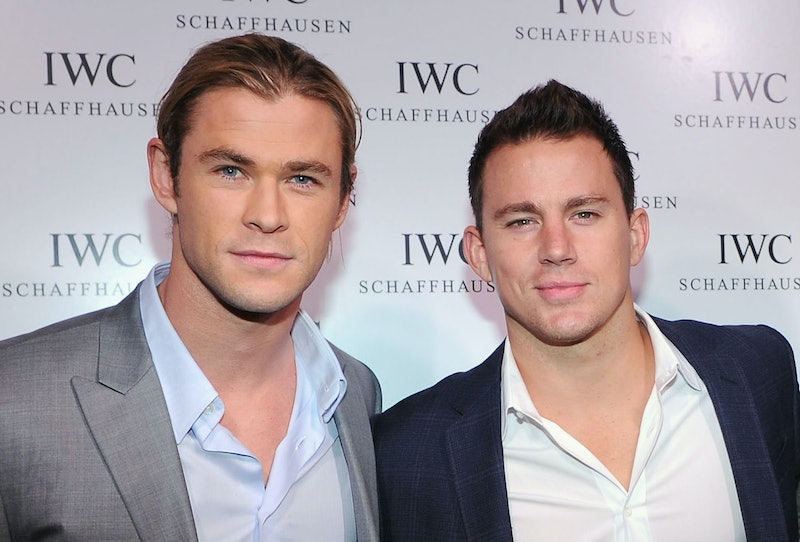 These guys. Such an unexpected — and yet totally charming — little Hollywood story. For some currently unknown reason, Chris Hemsworth sent Channing Tatum a giant donut, according to a post on Tatum's Instagram page. So, in case anyone out there was wondering: Yes, their bromance is still very much alive and thriving.

Maybe the reason was as simple as "thinking of you" or "just because." Maybe the duo was celebrating some sort of secret, friendship-related anniversary. Maybe — just maybe —  it was a congratulatory gift in honor of the box office success of Tatum's recent animated film, Smallfoot. Who knows.

The fact of the matter is this: Hemsworth sent Tatum a ridiculously large donut called the "Chris Hemsworthy," and — no matter the reason — Tatum's reaction to the sweet treat was really, truly priceless. Hemsworth definitely knows the way to Tatum's heart, no doubt about that.

After Tatum received the thoughtful gift from his friend, he posted a video of the un-boxing via Instagram. The post had no caption, but honestly, no caption was needed. On the top of the pastry's box, Hemsworth wrote a special message to his pal that read, "To Chan Enjoy your Chris Hemsworthy."

So, for context: Hemsworth's delicious gift to Tatum was born from a U.K.-based, vegan-friendly joint called Doughnut Time. According to the blog Pretty52, the brand launched several "Mega Doughnuts" earlier this summer, and each one measures a jaw-dropping 18 centimeters in diameter.

The "Chris Hemsworthy" is the actual name of one of their aforementioned "Mega Doughnuts," by the way. It's made with a red velvet vegan donut base, and topped with cookies and cream frosting, vegan cookie pieces, and chocolate drizzle, the company's website explained.

As Tatum unboxed the massive treat, he can be heard exclaiming to his friend, "Do you f*cking know about this? It's huge!" He then hovered his hand above the donut for scale, and wow — Channing Tatum has huge hands. I mean, wow — that is a huge donut. "I'm so excited about it," Tatum said, right before he panned to his clearly thrilled face.

It's not totally clear when or how Hemsworth and Tatum first became bros, but they were snapped goofing around together at an Oscars party way back in 2014. The internet really took notice of their love for one another this summer, though, after Tatum left a particularly *interesting* comment on Hemsworth's Instagram page.

The comments section of Hemsworth's post was, understandably, brimming with thirst, but Tatum's comment about the photos was probably the most thirsty/accurate of them all. "I will see anything with Chris shirtless in a field of flowers," he wrote. "Or Chris looking like Jesus in the rain." Same.

Tatum and Hemsworth's friendship is undoubtedly a real treat for fans to observe. It might even be a sweeter treat than that incredibly large donut. Well, depending on how much you like donuts, I guess.

More like this
Rachel Zegler Reveals She Had Breast Cancer Scare
By Radhika Menon
Everything To Remember About Lace Morris Before 'Bachelor In Paradise' Season 8
By Grace Wehniainen
Paul Mescal, Man Of Mystery
By Samantha Leach and Heather Hazzan
Khloé Kardashian Is Reportedly Dating A Private Equity Investor She Met Through Kim
By Jordyn Tilchen and Jake Viswanath
Get Even More From Bustle — Sign Up For The Newsletter