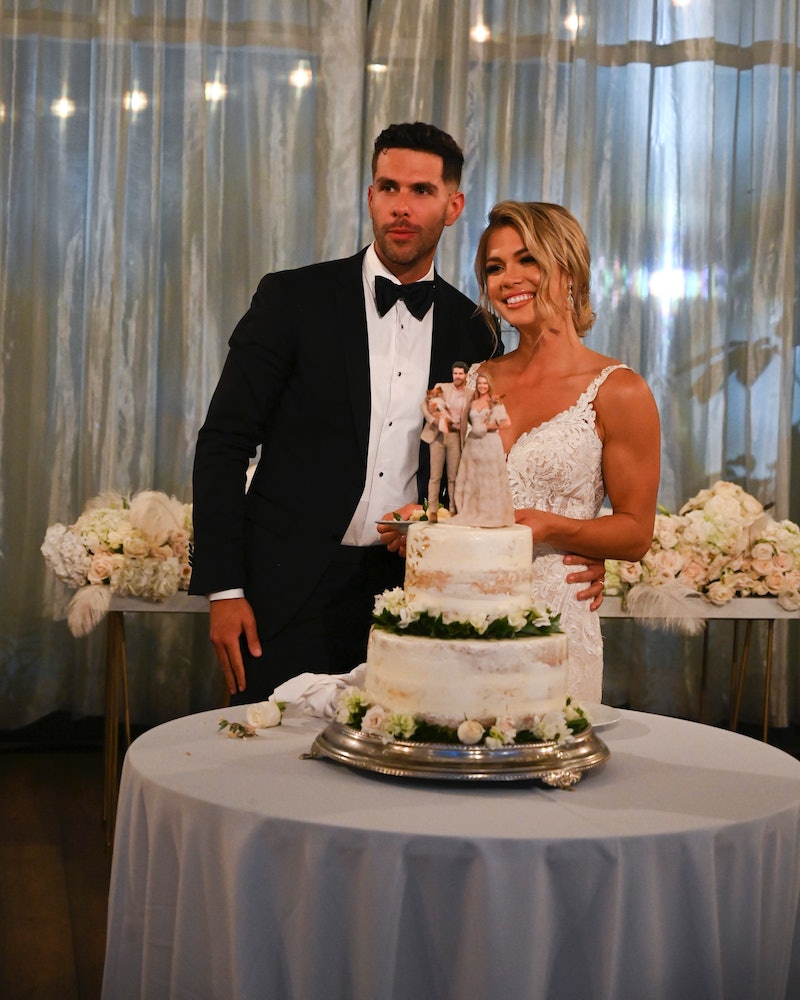 It turns out that John Paul Jones wasn't the only one spilling some tea about a fellow Bachelor alum during Tuesday night's episode of Bachelor in Paradise. The evening mostly centered around Chris Randone and Krystal Nielson's wedding, which served as a reunion for many of your favorite alums who turned up for the happy occasion. However, there could've possibly been one more. In a recent tweet, the groom joked that Jed Wyatt offered to sing at Chris and Krystal's wedding, though, they opted to "kindly decline" the generous request.

“Jed reached out to offer free music appearance for our wedding but we kindly declined #bachelorinparadise,” Chris tweeted out to his followers on Tuesday, Aug. 27, as he watched his wedding ceremony and reception play out on-screen in Mexico, where the two of them initially met a year ago and had their first date. The couple have been looking forward to this day for quite some time, so you can imagine why they wouldn't be too keen on having a fellow alum — who was just the subject of so much drama on Hannah B.'s season of The Bachelorette — be there to potentially steal focus from what the day should be about: celebrating their love for each other.

But as funny as it would've been had it actually happened, it appears as though Chris' remark was, most likely, simply made in jest. (Bustle reached out to Jed about Chris' comment, but had yet to hear back at the time of publication.) From what can be gathered, though, it seems Jed didn't actually offer to play his music for their big day. That being said, it wouldn't have come as that big of a surprise if he had done such a thing. On The Bachelorette, the Nashville singer found almost any excuse to bust out his guitar and burst into song. It's kind of his thing. So you can imagine how he would've jumped at the chance to showcase his musical stylings during such a highly anticipated (and widely watched) moment on Bachelor in Paradise.

After The Bachelorette finale aired back in July, Jed appeared on Rachel Lindsay and Ali Fedotowsky’s “Bachelor Happy Hour” podcast, where he discussed his numerous singing moments on the show, claiming that he “never would have dreamed” producers would encourage him to play guitar as much as he ended up doing throughout the season. “[Hannah] liked when I played and wanted me to play," he added. So maybe all that singing wasn't always up to him.

Either way, it would've been pretty interesting to see him at the wedding with a guitar in his hand. But alas, it just wasn't meant to be, though, that's not to say that Chris and Krystal's wedding was devoid of drama. John Paul Jones got into a loud confrontation with Derek. The conversation was mostly one-sided, though, as JPJ didn't really let Derek get a word in edgewise to defend himself from the accusations coming his way.

JPJ claimed that Derek uses his Bachelor fame to sleep with women and he doesn't want to see Tayshia be his next target. He also claimed that Derek uses the drama from these shows to help draw a bigger audience to his podcast or... something? He mentioned the podcast a lot, but it was a little unclear what exactly he was so mad about. Derek tried to deny everything, but wasn't able to get too many words out before JPJ would cut him off and start yelling again — something that's truly out of character for such a typically mellow dude.

It was a pretty awkward situation, to say the least, and not exactly an appropriate setting to has this kind of thing out. Neither of the guys ended up getting invited to the reception, so thankfully, the drama ended there (at the wedding, at least). If only Jed had been there to play his music, it may have overpowered the sounds of their fight.