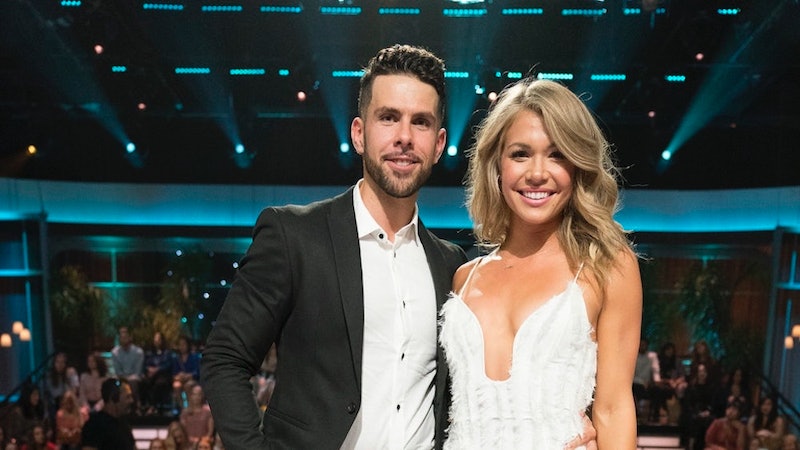 Not all Bachelor in Paradise couples are able to last out in the real world, away from the sunny beaches and camera crew, but in the case of Chris Randone and Krystal Nielson, their love for each other has only gotten stronger with time. In fact, the two of them got married back in June. However, that may not be the only big life event heading their way in the coming months. It turns out that BIP's Chris and Krystal are planning to start a family in the very near future, which means there could be a new baby joining the Bachelor Nation community around this time next year.

“I’ve gotten off of birth control,” Krystal revealed to Entertainment Tonight during ABC’s Television Critics Association summer press tour party in Los Angeles on Monday, adding that she and Chris have already “talked about starting a family.” Though they aren't actively trying to get pregnant right now, they do have a general idea of the timeframe they have in mind, and it isn't too far away from now. “We’re talking about the beginning of the year, starting to try for a family," she explained. "Truly what we’re doing through the end of the year is a full cleanse of the mind, body and spirit, just getting ready for the next chapter.”

For his part, Chris joked that this was the first he was hearing about this plan. "This just happened, alright. This is breaking news. You're the first to know, actually," he told ET, while remarking to his new wife, "I can't believe you just said that."

Regardless of how it all turns out, it's clear that things are going well for the newlyweds and that they are looking forward to expanding their growing family, whenever that may be. The two of them initially fell for each other in Season 5 of Bachelor in Paradise, which resulted in Chris getting down on one knee at the end of their time in Mexico.

And since Paradise was what brought them together, Chris and Krystal thought it would be a fitting place for them to tie the knot. In fact, their wedding will be featured a few weeks from now during BiP's sixth season. And while they're eager for the world to see their big day, Chris admitted that he was very nervous at the time, to the point where he almost fainted.

"I was on such a high but all of the emotions [came in], because I was sad, I wanted to smile and cry, but my family was there, so it was a lot to take in," he revealed. "As soon as she opened up the gate, you'll see what happens. It was a beautiful moment, something I'll never forget, for sure."

And while Krystal shared that she tried on "26 dresses over 12 hours," she ended up going with something much more simple than she expected. "Ultimately I just wanted to feel like myself, so I went with something simple that I just felt beautiful and like me, like I was shining," she added. "So, I'm excited for everyone to see it."