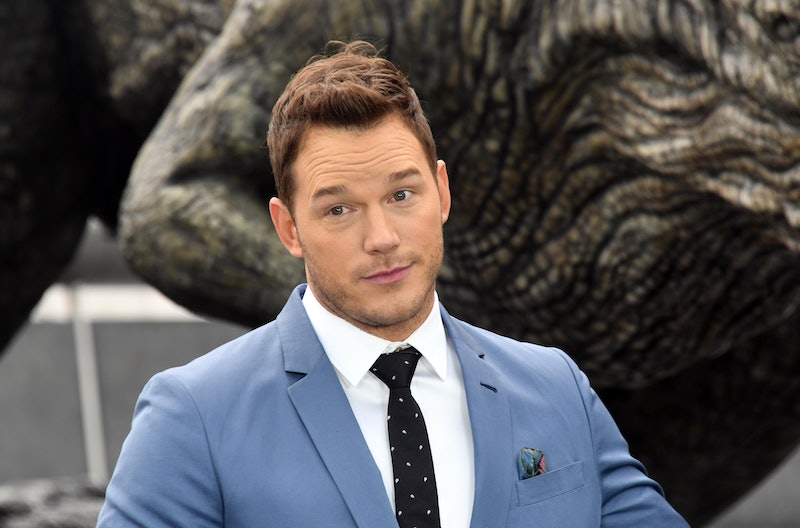 Chris Pratt: comedian, action star, hardworking farmhand. Surprised by that last one? Well, it's true. Kind of. He at least knows how to rock a 10-gallon hat, as evidenced by a recent photo that his fiancé shared on social media. Pratt wrote the caption on Katherine Schwarzenegger's latest Instagram — which shows the actor in his country-western best — and the way he described the whole thing will definitely give you a good giggle.

On Feb. 18, Schwarzenegger posted a photo of Pratt in what appears to be a barn. He's lovingly clutching an adorable little lamb against his chest, and his outfit is perfectly appropriate for the occasion.

Now, there are about a thousand different ways one might choose to caption such a picture. Perhaps you'd write something that plays on "Mary Had A Little Lamb." Maybe you'd just use some emojis, like the heart-eyes and the sheep — because it's pretty damn cute — or the smiley face wearing a cowboy hat — because duh. In Pratt's case, though, he decided to make the whole thing into a lengthy joke that ultimately pokes fun at himself.

"I have often wondered why his hands were so rough," the actor wrote, pretending to be writing as Schwarzenegger at first. "Now i know. He works the farm. He’s a real man."

Pratt then added a hilarious aside, confessing,

"(Katherine asked me what to write so I wrote the above even though it is not true. Full disclosure: I have very soft hands. I literally cut my hand today i think, on a lamb. I am from Hollywood. Love, Chris) #farmlife"

First of all, it's refreshing to know that Schwarzenegger consults with Pratt about her Instagram captions. Everybody needs a second opinion from time to time, and she's fortunate to have a jokester like Pratt to bounce ideas off of.

Second of all, isn't it a treat to learn that Pratt has soft hands (or so he says)? So soft, in fact, that he "literally cut [his] hand ... on a lamb." That is soft. Really soft. Maybe too soft? He might need to cut back on his moisturizing routine juuust a tad. Although, he is from Hollywood, as he explained, so perhaps his profession as an actor requires him to have velvety palms at all times. Perhaps.

The couple is clearly enjoying hanging out at their farm. Pratt has posted several photos of their time there over the past several days, including one of Schwarzenegger holding the lamb — who was born on Valentine's Day and is named Cupid, according to a pic Pratt posted on Feb. 14 — for which the actor came up with yet another chuckle-worthy caption.

"@katherineschwarzenegger rocks the latest trend in fierce accessories. The eggshell wool baby lamb," he joked. "Super high maintenance but worth it for this fashion icon. #farmlife."

This guy. This guy's got jokes. And props on describing the lamb's coloring as "eggshell." That's pretty high-brow and oh-so-very #fashion.

In another photo from the farm that shows a steer in a snowy pasture, Pratt wrote, "From Longhorn to Snow Bunny. Learn how BabyGurl does it all and still manages to brings the fire in an all new episode of The Real House Cows of #Farmlife Hills."

LOL at "BabyGurl." Actually, LOL at the whole thing, and also like, the majority of his captions in general. How does he even come up with this stuff? And can he write all of my Instagram captions from now on, too? You're a lucky lady, Katherine Schwarzenegger. A lucky lady, indeed.