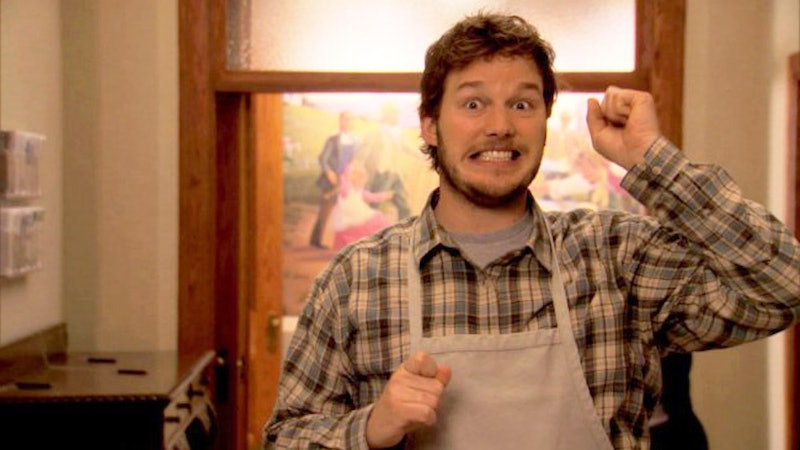 Mouse Rat lives — well, sort of. Chris Pratt performed "Everything Is Awesome" as Andy Dwyer and it's definitely The Lego Movie and Parks and Recreation crossover fans didn't know they needed. Oh yes, it's really that awesome.

While promoting The Lego Movie 2: The Other One on The Graham Norton Show, Pratt revealed that he sometimes likes to cover "Everything Is Awesome" in the musical style of Andy Dwyer. Then he pulled out a guitar and gave the crowd a taste of what this sounds like, which is a lot like Andy's old band Mouse Rat or whatever they're calling themselves now. According to Pratt, that sound is "really terrible frat boy rock music."

But this wasn't terrible, it was very delightful. That growl, those tightly closed eyes, yep, that's definitely Andy singing "Everything Is Awesome." Leslie Knope (Amy Poehler) would have loved it and made a scrapbook all about it. April Ludgate (Aubrey Plaza) would have tolerated it because of how much she loves him. After all, he's no Neutral Milk Hotel.

Either way, this performance was another reminder of just how much we all miss Parks and Rec nearly four years after it went off the air. Raise your glass of Snake Juice to that and to the fact that it's now airing on Comedy Central.

The truth is: Pratt seems to miss the show, too. This isn't the first time he's shown some love for Andy through song. At the show's wrap party in 2014, he recreated Andy's glorious tribute to Li'l Sebastian singing Mouse Rat's "5,000 Candles In the Wind."

Last year, Pratt talked about where Andy would be now. "I think he becomes a weatherman," he told E! News. "He would be a good weatherman. He would have no idea what he's even saying." But Pratt knew what he was saying when he said that he'd be down to be a part of a Parks and Rec reunion. "Oh, man, as long as I'm in town, yeah, I'll do it," he told E!. "It films like 10 minutes from my house so that would be dope. I mean, you can't film Parks and Rec without Andy."

For those who were worried all that reunion talk was just lip service, Pratt has kept his word. Yesterday (Feb. 5), Pratt announced he will take part in the upcoming Parks and Rec reunion at PaleyFest in March in honor of the 10th anniversary of the show's premiere.

"I loved playing Andy so much. I miss my ParksnRec family," he tweeted. "Here's a scene that was tooo long to make the episode." The scene was, what do you know, one where Andy gets to sing his little heart out for a bunch of kids about sudden death. So, you know, some very light frat boy rock music faire.