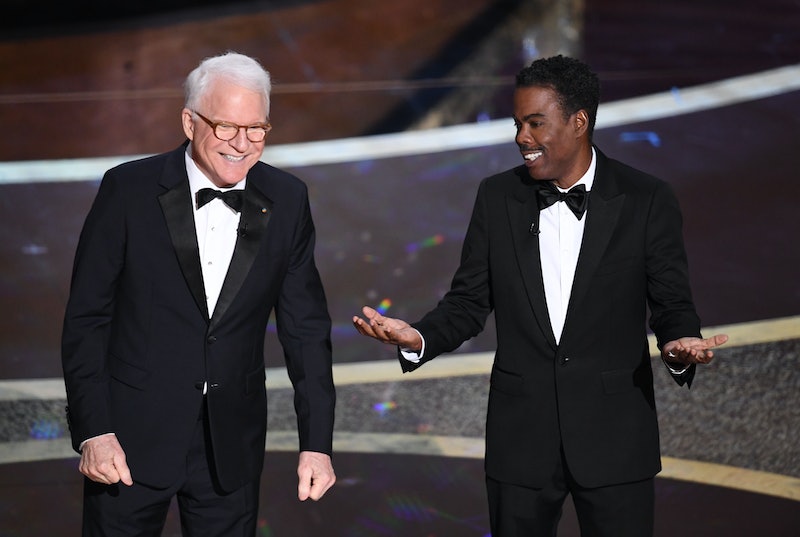 The 2020 Academy Awards may have technically been host-less, but Chris Rock and Steve Martin delivered an Oscars monologue that kicked off the show with a lot of shade. Rock and Martin, both previous Oscar hosts, followed up Janelle Monáe's electric opening number with a searing critique of the Academy's lack of diverse nominees.

The Oscars received quite a bit of criticism for their mostly white, mostly male nominees this year. With only one black actor — Cynthia Erivo — nominated in an acting category, #OscarsSoWhite is unfortunately alive and well, and that did not escape the notice of the two comedians. "Cynthia Erivo did such a good job hiding black people in Harriet, the Academy got her to hide all the black nominees," Rock said, eliciting nervous laughter from the crowd. The duo also joked about the lack of women nominated for Best Director. After Martin noted that he "thought there was something missing from the list this year," Rock helpfully suggested, "Vaginas?" (Cut to: Greta Gerwig clapping in her seat.)

The three-minute bit was full of Oscar shade, hitting at the Academy for everything from their lack of a host — "this is such an incredible demotion," Martin joked — to the lack of diversity, to attendee Jeff Bezos — "He saw Marriage Story and thought it was a comedy," Rock quipped.

The audience at home was quick to hop on the shade train. But not everyone loved the monologue, with some pointing out that the entire idea of inviting comedians to make jokes about how white and male the Academy nominations are doesn't make up for the state of the nominees in the first place.

More like this
What Is Mary J. Blige’s Net Worth? The 9-Time Grammy Winner Is Doing “Just Fine”
By Hugh McIntyre
How Andrea Riseborough Got Nominated — & Almost Disqualified For An Oscar
By Jake Viswanath
12 Years Ago, Austin Butler Manifested His Oscar Nom In This Disney Movie Scene
By Jake Viswanath
Paul Mescal’s Family Celebrated His Oscar Nomination In The Sweetest Way
By El Hunt
Get Even More From Bustle — Sign Up For The Newsletter
From hair trends to relationship advice, our daily newsletter has everything you need to sound like a person who’s on TikTok, even if you aren’t.