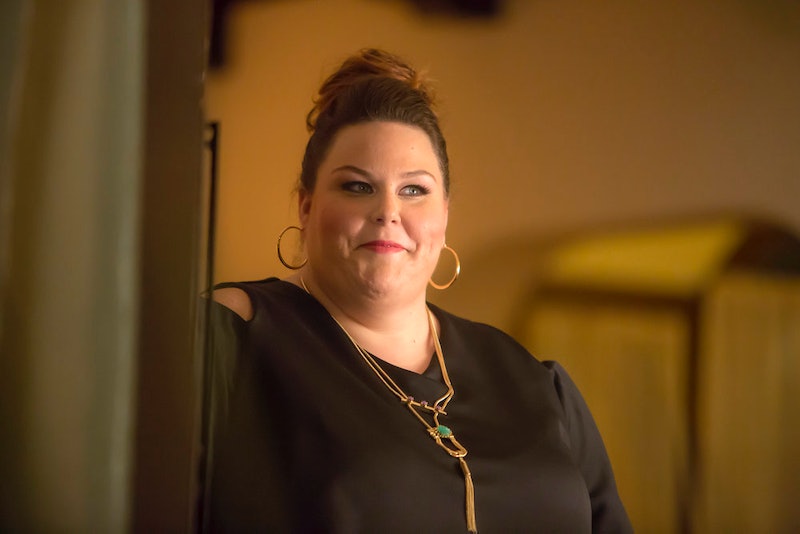 This Is Us Season 1 offered up the kind of positive plus size representation many viewers have been wanting to see on their TV screens, thanks to the amazing character that is Kate Pearson. And in an interview with Entertainment Weekly, Chrissy Metz revealed fans' favorite Kate scene. Her answer should come to no surprise to anyone who tuned in for the pilot episode: it seems fans always want to discuss Kate's This Is Us scale scene, and for good reason.

In the scene, Kate takes off all of her clothes, right down to her earrings, before stepping on to the scale. As Metz told EW, the moment felt new in a TV landscape that shies away from showing bodies that don't meet societal standards of beauty. The actor explained,

"I think that the performance started resonating with people right out of the gate when I was basically half-naked on a scale. I just don't think we've seen a scene or a body shape like mine or a scene like that on network television in a real and raw way but not specifically only focused on weight. So, no pun intended, there was the bigger picture to it."

Metz completely nails everything that made the scene feel so revolutionary for some viewers. The moment Kate steps on the scale is one that anyone who has struggled with body image issues can relate to, and because of that, it made Kate a character viewers could see a bit of themselves in.

Talking about body image is not easy. Maybe that's one of the reasons why TV often either avoids it altogether, or focuses on characters who are totally at ease in their skin. Kate's struggle is hard, and not because she's plus-size, but because she's internalized all of these ideas about her self-worth being tied to her weight. Stepping on that scale (and then falling off of it) is the moment her journey toward self-acceptance begins.

For viewers, it's a scene that immediately bonds them to Kate. Even though the scale scene is just the beginning of her arc, it makes a powerful statement about her starting point. She's in a place of self-loathing that all too many people have been in, and it's one prompted by a host of outside factors that have nothing to do with weight. As Metz noted, it's not specifically about weight at all — what the moment is about is Kate's state of mind.

No matter what number the scale says when shes steps on it, it's going to make her feel bad about herself because she's involved an intense, lifelong struggle with her body image. For fans, there's a good chance a scale has made them feel bad about themselves at some point too. Due to media and societal expectations, men and women often strive to fit unrealistic beauty standards. You too have likely taken off every piece of clothing in hopes of making the scale offer you the number you want. Let's face it, scales can be super triggering, especially if loving your body is something you struggle with.

For that reason, seeing Kate in such a vulnerable moment touched people. It says so much about how body image issues affect people's lives that this is the scene that Metz gets asked about the most. Talking about how you feel about your body, and how you want to feel about it, is scary and most people try to avoid it. It seems that having a character as intricate as Kate tackling the subject with pathos and humor each week might just be making the taboos surrounding body image a little less powerful.