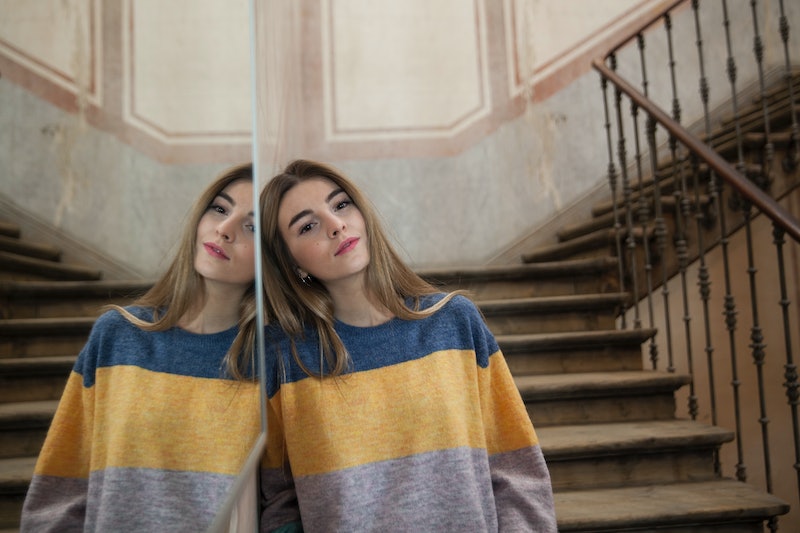 Body image is, obviously, a very fraught topic in modern society; our conceptions of our bodies, particularly the female body, are often absurdly self-critical, fueled by ridiculous, patriarchy-constructed, media-mythologized impressions of "perfection". (Yes, body positivity is a feminist issue.) Having negative body image is difficult, fraught, and can lead to serious health issues; but it seems as if even the healthy brain, with all correct information about the body's dimensions available to it, can still get it slightly wrong. And while we're not entirely sure why, that places a different emphasis on body image issues: perhaps brains in general are simply not to be trusted with holding a correct vision of the bodies carrying them around. Yes, I mean everybody's brain.

The neuroscience of body image is a very complex field, in part because of the interplay between societal messages about ideal bodies and the stimuli communicated about the body itself via senses like touch and sight. But we're discovering that when it comes to stimuli at least, the brain can get it really wrong, or interpret the same thing in vastly different ways in different people. We might be able to understand pathological body image problems a bit better if we can probe how weirdly unreliable the brain's image of a body might be.

So here's part of the story on how your own image of your body is constructed in your brain, and how easily it can go completely off the rails.

Your Parietal Cortex Seems To Form Your Mental Body Image

The body, it turns out, reaches a decision on its internal image of itself via a lot of external cues and stimuli, from what it sees to what it feels. And thanks to an experiment conducted in 2005, we're now aware of the part of the brain that processes a lot of that information and spits out an image — and how it might get things wrong.

The 2005 study was conducted by researchers at University College London, who fitted the hands of 17 different volunteers (all of whom had healthy or "realistic" views of their bodies) with mechanisms that flexed their tendons artificially, making it feel as if anything they touched was shrinking as they felt it. (Yes, that is creepy.) The UCL subjects were asked to touch their waists while the mechanisms were on, and had their brains scanned as they experienced the peculiar "waist-shrinking" feeling.

As the brain comprehended and assessed this new "information" about its size, a particular area lit up: the parietal cortex. It's otherwise known as the primary sensory area, where much of the sensory stimuli from our bodies is processed and concepts of space and distance are created. The result made it clear that our body image's creation — at least the part that comes from external stimuli related to the body's sensations — begins its formation in that area of the brain. But the experiment also revealed something enlightening: how body image is perceived can differ radically between separate people.

Why Our Perception Of Our Bodies Is Not Exactly Reliable

The brain's conception of what is actually happening in the body can be pretty easily fooled. A well-known scientific experiment involves replacing a subject's hand with a dummy or model hand, and having their real hand placed out of sight. If both are touched at the same time in the same way, the subject will "feel" the model hand actually experiencing the sensation. So sensory input about our bodies can be confusing, but it turns out that our brains can have very individual ways of processing information that lead to divergences in body image.

The UCL researchers noted something very interesting: even though every person in the study received exactly the same stimulus telling them that their waist was "shrinking," there was a wide variation in how much each person thought they had "shrunk". Some people felt the sensation more strongly than others. It was unclear what played into this differing sensation, but the stronger the illusion for the participants, the more active their parietal cortex was, indicating that it was working on an entirely new body image. Feeding information to the brain, in other words, can have unpredictable results for body image in different people, and we're not entirely sure why.

It also looks as if, even with the parietal cortex trying its hardest, the brain's conception of the body's shape and position is often wildly divergent from the reality, and not just in people with clinical body dysmorphia (a deeply ingrained distortion of body shape and size, often associated with eating disorders). A very interesting study in 2010, also conducted by UCL, was done on the hands of volunteers, to see how the brain "saw" them. The left hand was covered with a board, and the volunteer had to identify where its knuckles, fingers, and so on were located, without observing them. The researchers put together a picture based on what the subjects thought their hand measurements were, and found that, on average, the subjects' brains believed their hands were 33 percent shorter and 66 percent wider than they actually were.

The subjects did genuinely know what their hands looked like; they could pick them easily out of a photo lineup. But left to its own devices, without any sensory backup, the brain distorted them completely — and these were volunteers without noted body image "issues". This may be why mental body image is so vulnerable and capable of inaccuracy: the brain's self-image systems may just be inherently unreliable, not in some people, but in everybody.

So what does this all teach us about body image in the brain? Well, it's a tricky thing. The brain clearly tries to integrate sensory information from the outside world into its picture of the body's dimensions and size, but it seems very easily tricked, shifts from person to person, and tends to make inaccurate assessments. In other words: if your brain's telling you that you look abysmal, it probably has no idea what it's talking about. Take any negative assessments of yourself with a major grain of salt, and try to remember that even your hormonal fluctuations can also have a large impact on your self-perception.

More like this
The 5 Best Pillows For Acid Reflux, According To A Sleep Expert
By Maria Cassano
Here’s Your Daily Horoscope for December 5, 2022
By Mecca Woods
7 Dos & Don'ts To Follow For The December 2022 Full Moon
By Brittany Beringer
Here's How To Support Jewish People Amid Rising Antisemitism
By Hannah Orenstein
Get Even More From Bustle — Sign Up For The Newsletter