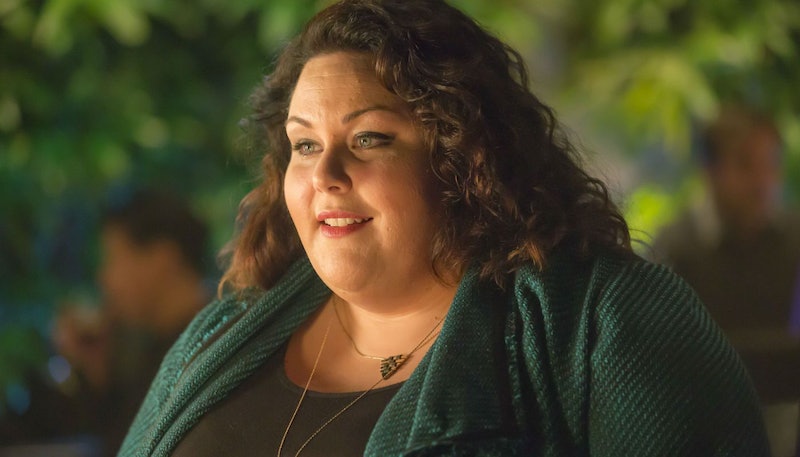 As a woman who has struggled to not define my worth by a number on a scale, watching This Is Us was an especially emotional experience. Season 1 introduced the world to Chrissy Metz's Kate, a character who spent her entire journey certain that she could be happy if only she could lose weight. I love Kate, even as I often cringed at the ways she avoided the truth — happiness would only truly come when she figured out how to love herself as she is. That's why I am so excited that This Is Us Season 2 will be expanding Kate's story to include major career goals.

According to Glamour, co-showrunner Elizabeth Berger confirmed Kate's singing career will be an important part of her Season 2 story. This is amazing news for both Metz and Kate. Thanks to a memorable nursing home performance, fans know Metz has an amazing voice, and Kate always had a dream of being a singer. It is a dream she put aside to help her brother Kevin establish his Hollywood career, and so Kate didn't have to face rejection up on a stage.

While there has been criticism lobbed at how weight-centric Kate's Season 1's story was, it is undeniable that Kate is one of the most groundbreaking plus-size characters to ever grace the small screen. At first her weight loss journey was presented as Kate's only way of finding self-acceptance — but throughout the season, it became clear to both the viewers and Kate, there was self-loathing lurking under the surface of her desire that had nothing to do with how much Kate weighed, and everything to do with internalized guilt over her father's death, as well as fear and anxiety over showing the world her true self.

Kate deserves stories that revolve around her career, her friendships, and her complicated relationships with her family members. Having her choose to pursue her dream of singing now is a smart move for the show to make. Not only is it proof Kate is tired of putting her life on hold, it also connects her to mother, Rebecca, in a powerful way.

While Rebecca's desire to manage Kate's weight when she was a child came from a well-meaning place, it also damaged her relationship with her daughter, as well as contributed to many of Kate's feelings of inadequacy as an adult. Music is one thing these two women have in common, and it may lead to them having an honest discussion about what bonds them and what has driven them apart over the years. If they end up performing together, all the better.

It's not just Kate's singing career that makes me hopeful Season 2 will bring major character growth. Toby and Kate are also moving forward with their wedding planning, and whether or not it actually leads to the duo getting married, it is yet another story about Kate, not about how Kate interacts with other people.

For her part, Metz is a major advocate for pushing Kate's story forward. She recently told People magazine, she wants an onscreen love scene between Toby and Kate. "When are they going to have sex, guys? Onscreen. I want it onscreen— I guess it’ll offend people, still," Metz told People.

I hope Kate gets that sex scene, a vital career, and a sense of self worth to match her amazing, beautiful, funny personality. If Season 1 was about Kate realizing her size was not the root of all her problems, then let Season 2 be about Kate seizing every opportunity that comes her way. Not only does she deserve it, but the world needs to see a character as groundbreaking as Kate lead a life as full and rich as everyone else's.

More like this
The First Trailer For 'That '90s Show' Includes So Many Nods To The Original Series
By Jack Irvin, Alyssa Lapid and Grace Wehniainen
Kate Winslet Spoke Candidly About Filming A TV Series With Her Daughter
By Sabah Hussain and Sam Ramsden
Our First Look At 'Vardy V Rooney: A Courtroom Drama' Doesn’t Disappoint
By Bustle UK
Ciarán Griffiths Is Making His 'Corrie' Comeback
By Catharina Cheung
Get Even More From Bustle — Sign Up For The Newsletter