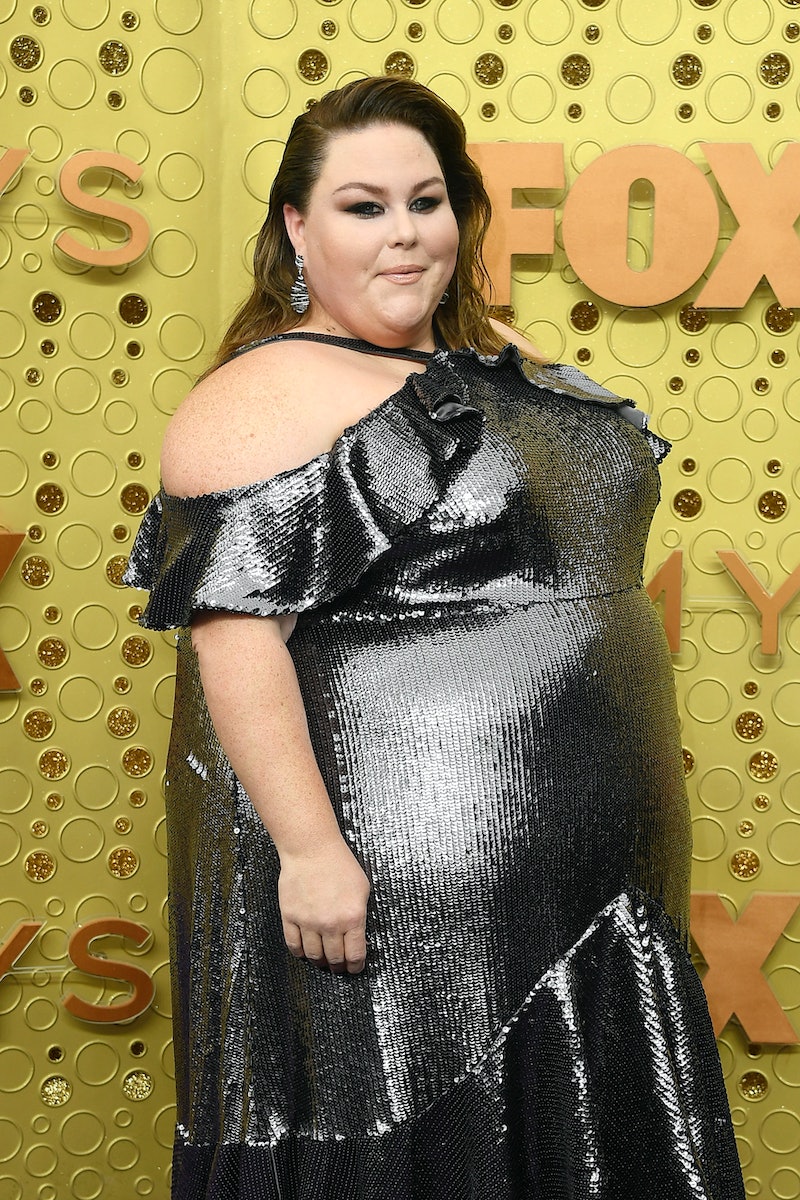 There's no place more appropriate for head-to-toe sequins than an award show, baby. At the 2019 Emmys, Chrissy Metz walked the red carpet wearing a long, sparkly, gunmetal gown that was absolutely stunning. The off-the-shoulder look made sure the actor literally shone as she made her way into the ceremony.

With This Is Us finally nominated for some well-deserved awards, fans' eyes were peeled for cast members at the Sunday night ceremony — and Metz didn't disappoint. The dress was a custom look by Christian Siriano, who also designed a whopping six other dresses for other celebrities at the Emmys, ET reported. The look is in line with the actor's usual style: Metz almost always wears colorful pieces for events, and seems to be a fan of bold dresses with statement silhouettes. While she most often spotted on red carpets in deep blues, greens, and reds, Metz has worn just about every color of the rainbow in the past year — but this dark silver gown is a new hue for the star.

Metz paired the dress with minimal accessories, sticking to drop earrings and a single, statement ring. Her hair, done by celebrity hairstylist Marc Mena, was swept to the side — and, as PopSugar pointed out, made for a twinning moment with Hannah Zeile, who plays the younger version of Metz's character on This Is Us. They also both wore super smoky makeup, adding to the glam punk vibe of their ensembles.

Metz has made her love for bare shoulders very clear in the past. Before 2018 Emmys, Metz told ET she loved her one-shoulder, emerald, custom John Paul Ataker gown because of it's open neckline. "I'm like, why you gotta put so much fabric on a big girl?" she said. The internet was positively obsessed with the look, which she paired with a bright purple clutch.

In addition to frequently showing off her arms, Metz has also been real into sequins lately. Her most recent red carpet look before the Emmys — at the Gay Men's Chorus Of Los Angeles 40th Anniversary Gala Concert — was also a head-to-toe sparkle moment. For that she, wore a navy wrap dress with fabulous, feathery trim.

After being snubbed in 2018, This Is Us is nominated for Outstanding Drama Series at the 71st Emmys. In addition, Metz's co-stars Mandy Moore, Sterling K. Brown, Milo Ventimiglia, and Chris Sullivan were all nominated for Outstanding Performances in their respective roles on the show. In an Access Hollywood video that aired this past July, Metz gushed about how proud she was of her co-stars — and revealed she was actually the one to tell Sullivan (who plays her husband on the show) about his nomination. "For Mandy and Chris particularly to be nominated, I did get emotional," she said. "I’m really excited and proud. Proud seems silly, but I’m really proud and it’s really overdue.”

Lesson learned: When your show finally gets its recognition, you wear as much sparkle as you possibly can.