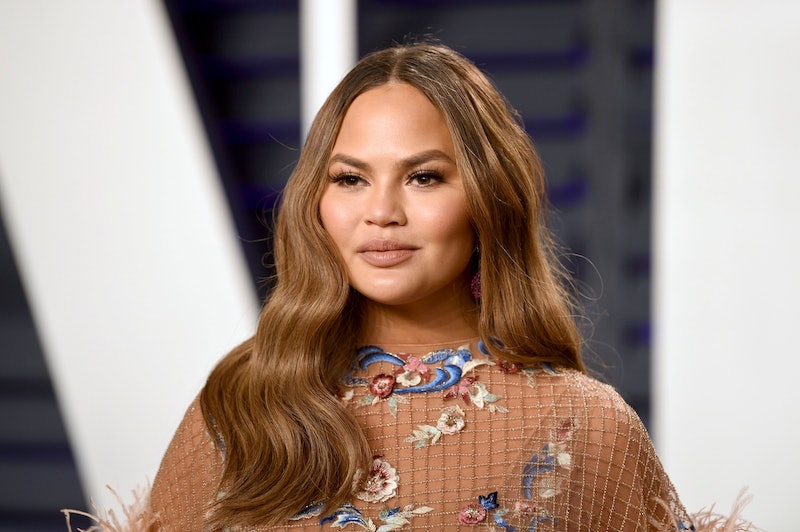 Evan Agostini/Invision/AP/Shutterstock
By Meghan DeMaria
May 3, 2019

As Women's Health Month and Mental Health Awareness Month kick off, Chrissy Teigen is addressing her postpartum depression experience in order to help other moms who might be in similar situations. The cookbook author is partnering with the Allegheny Health Network on a campaign called #MyWishForMoms to "reduce the stigma of postpartum depression and anxiety," according to its website.

Teigen appeared on the Today show on Thursday to talk about the initiative and her goal of raising awareness about mental health struggles that moms may face. As the hosts explained, one in seven new moms develops postpartum depression, according to a 2013 study published in the journal JAMA Psychiatry. (The CDC's website also notes that the figure may be as high as one in five women in some states.) And Teigen suffered from postpartum depression after the birth of her and John Legend's first child, Luna.

"I didn't really realize it until I'd written an article with Glamour magazine and spoken out about it, how many women are going through this," Teigen said on the show. "And I think more than anything I've ever done, more women on the street come up to me and talk about that article than anything else."

The model also shared an Instagram post about the initiative, asking moms to share pictures of themselves that show "what it felt like having a new baby," along with the #MyWishForMoms hashtag. "Tell them what you wish you knew when you were going through it," Teigen encouraged her fellow moms. "Imagine if we can get just as many people talking about postpartum depression as women who experience it each year — that's over 500,000 of us!"

According to the CDC, some symptoms of postpartum depression can include anger, or fear that you'll "hurt the baby." Moms going through postpartum depression might also experience "feeling numb or disconnected" from their newborns, or they might find themselves withdrawing from other family members and loved ones.

Teigen first shared her own experience with postpartum depression in an essay for Glamour published in March 2017. In her essay, Teigen wrote about the physical aches and anxiety she experienced, and her feelings of not having enough energy to leave the house, aside from going to work on the set of Lip Sync Battle.

"Before this, I had never, ever — in my whole entire life — had one person say to me: 'I have postpartum depression,'" Teigen wrote in the Glamour essay. So by asking moms to speak out about their own experiences with the new hashtag, she hopes to change that.

More recently, Teigen mentioned her postpartum experience in March, tweeting that she'd felt better after her and Legend's son Miles was born.

"'How do you eat like this??' - basically I am 20 pounds heavier than I was before miles. he's 10 months old, I never lost the last bit because I just love food too much. Just coming to terms with my new normal, when I had this certain number for so long!," Teigen tweeted.

In a second tweet, she wrote, "the thinnest I've ever been was right after Luna. Postpartum depression. I'LL TAKE THESE POUNDS AND THIS FEELING!" She's choosing to focus on her happiness, including whatever that entails for her own body.

As Mental Health Awareness Month begins, it's nice to see celebrities like Teigen addressing various aspects of the mental health umbrella. Postpartum depression is more common than people may realize, and it's important to end the stigma around it, along with other mental health issues.