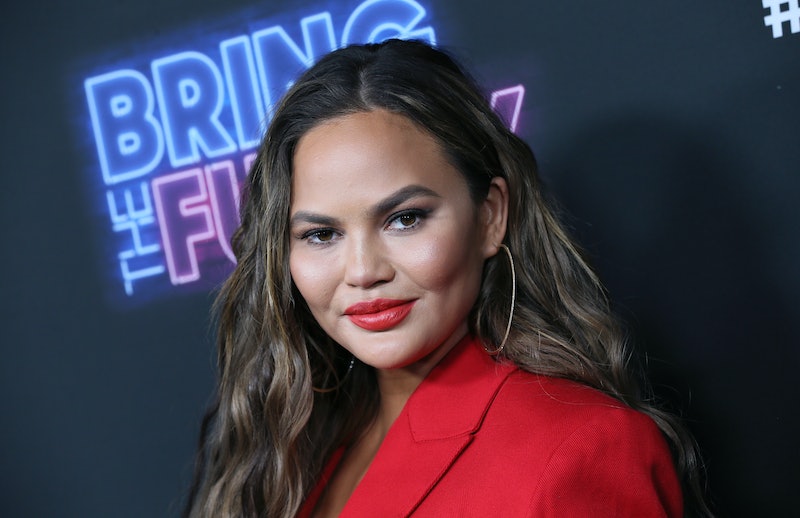 Frequent-flyers take caution! On Saturday, Chrissy Teigen reacted to getting altitude sickness on Twitter, showing off the swollen lip she got from the change in atmosphere while en route to Utah. Of course, Teigen handled the uncomfortable situation with her usual sense of humor, posting plenty of updates for fans as the lip-swelling progressed and blaming her home state for her condition.

On Saturday, Teigen tweeted about traveling to Utah, and how her home state had turned on her. She wrote, "very upset and saddened that my own birth state, Utah, has chosen to poison me with terrible altitude sickness." The star was flying to the state for a wedding, and tagged the bride and groom, Meghan Mackenzie and Luke Dillon, on Instagram, according to E! News.

Then, the cookbook author posted a photo of her puffy lip, revealing that the inflammation was caused by the change in air pressure. She wrote: "did u know angioedema can be triggered from altitude sickness? learn something new every day! my lip about to explode. goodbye world." Per the American Academy of Allergy, Asthma, and Immunology, Angioedema is any painless swelling, but it's most commonly caused by an allergic reaction to food, animal dander, or pollen. In addition to the picture, Teigen also described the wild swelling in another tweet, writing, "It’s so big it’s shiny and hard like glass."

Later, Teigen posted a video from the airplane on Twitter, which she captioned, "this is premeditated murder if you ask me." In the hilarious clip, she says:

"Luke, Meghan, why have you chosen to get married in a place which would try to destroy me?"

On her Instagram Story, Teigen continued the saga, joking that she would be taking legal action against the state of Utah and the newlyweds. She said, "My lawyer friend just told me that this could be perhaps premeditated murder if they knew they were doing this to me when they picked out the wedding venue, and I'm inclined to believe this person who I met on Twitter."

Though Angioedema from altitude changes seems rare, everyone can relate to travels gone wrong. In typical Teigen fashion, the star turned the unfortunate lip swelling into an opportunity to make fans laugh. She also posted a photo on her Instagram Stories which read, "Altitude Sickness Angioedema Makeup Tutorial Coming Soon."

The Lip Sync Battle host also posted a video using aerosol oxygen on the lip to try and calm down the swelling. "Oh yeah," she joked. "It's good."

Unfortunately, Teigen wasn't able to get the puffiness to go all the way down before the wedding, but she still managed to make it to the ceremony in good spirits. She posted a video from the event sitting with husband John Legend, and revealed that she'd brought the oxygen can along to keep using on her lip.

An allergy attack can strike at any time, and if altitude causes lip swelling the day before a wedding, you just have to laugh it off. Teigen's photos and videos from throughout the wedding weekend are honestly so funny and relatable, and it's clear that she didn't let her brush with Angioedema get her down.