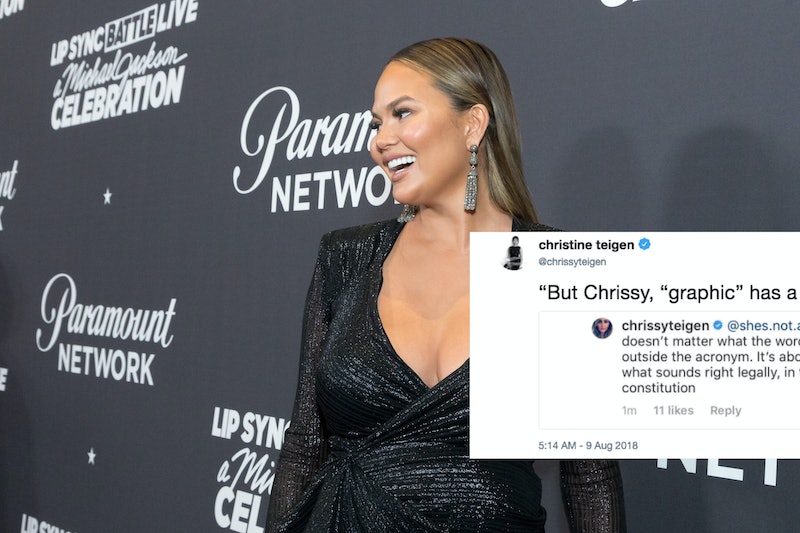 Why, Chrissy Teigen? Why did you have to stir this particular pot? The world had seemingly moved on, and yet here we are. In the early hours of Aug. 9, Teigen reignited the GIF pronunciation debate, and now social media will not let it go — again.

So, you know what a GIF is, right? Of course, you do. Well, in May 2013, the man who's responsible for inventing GIFs — Steve Wilhite —  made a shocking confession that rocked the internet to its core. "The Oxford English Dictionary accepts both pronunciations [of 'GIF']," he explained to the New York Times. "They are wrong. It is a soft 'G,' pronounced 'jif.' End of story."

*Gasp* The horror! The absolute horror. All this time, people — most people — had been pronouncing GIF with a hard 'G,' like "gift" without the 'T.' After Wilhite's staunchly firm statement, though, people began to take sides. And wow, did it get ugly.

It was kind of like the debate about the color of "the dress," or whether that damn clip was saying "yanny" or "laurel." There was no in between, no common ground to be reached. You were either on team "GIF" or team "JIF" — for life, basically. There was no definitive resolution, but the flames did eventually die down.

Until now, five years later. The "GIF" versus "JIF" debate has officially been re-sparked, and it's all because of Teigen.

To be fair, Teigen didn't intentionally cause the commotion. She was just doing her thing, minding her own business. In the early hours of Thursday morning, Teigen posted a clip where she can be heard asking, "Can you do GIFs on a video?" The answer is yes, as she clearly learned.

However, when Teigen said, "GIFs," she pronounced it "JIFs" — and yikes, did her fans jump all over it. "The cringe when I heard Jif," one Twitter follower wrote. "But it's not jif it's gif," another chimed in. "Y’all tripping. The creator said it’s pronounced JIF, not GIF. So you guys being ridiculous need to stop. @chrissyteigen knows what she’s saying," a third fan said, in defense of Teigen.

Shortly thereafter, Teigen came for her haters. "f*ck you, it’s 'jif', I don’t care what anyone says," the star tweeted, immediately followed by, "how do I disable twitter comments entirely." It seemed like she was over the debate before it really even took back off, but then ... well, she wasn't.

Teigen stood her ground as the debate raged on in the comment sections of both of social media accounts. "if saying 'hard g' gif out loud sounds right to you, then kudos you're delusional," she wrote on Instagram. "how do you say SCUBA?" she retorted to one fan's response. "Do you say skuh-ba?"

Then, something magical happened. She moved on, and resumed non-GIF-related social media activity. Just as the original debate five years prior, the second coming of the debate simply ... fizzled out. Well, for Teigen at least. As for the fans in her comments section? Not so much. So, which GIF pronunciation hill will you decide to die on?