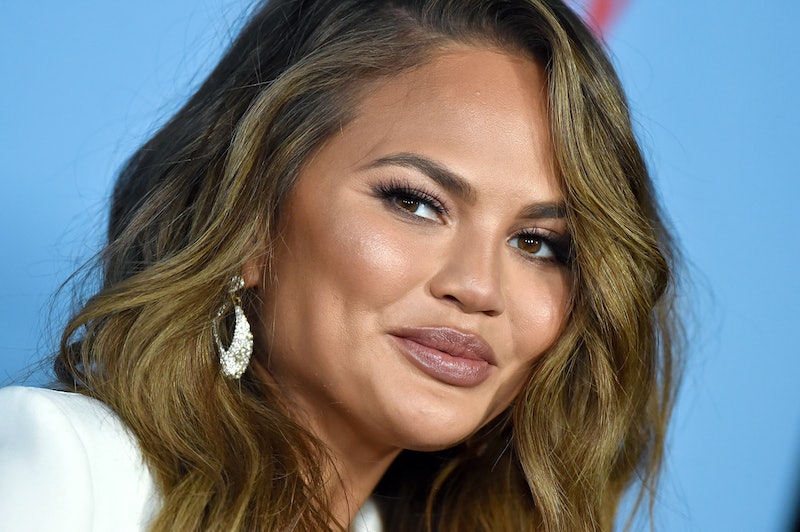 Chrissy Teigen is setting the record straight about her culinary empire. After New York Times contributor and cookbook author Alison Roman slammed her cooking and homewares brand, Chrissy Teigen responded to criticism about her Cravings empire and revealed just how intensely involved she is with every aspect of her growing brand. Roman — who is best known for developing viral recipes like "The Stew" — was speaking about her own career goals in an interview with The New Consumer, and compared them to Teigen's culinary successes.

"What Chrissy Teigen has done is so crazy to me," Roman said. "She had a successful cookbook. And then it was like: Boom, line at Target. Boom, now she has an Instagram page that has over a million followers where it’s just, like, people running a content farm for her. That horrifies me and it’s not something that I ever want to do." In response, Tiegen wrote a series of tweets explaining that Roman's comments were "a huge bummer and hit me hard" — especially because she was a big fan of the other food writer.

"I have made her recipes for years now, bought the cookbooks, supported her on social and praised her in interviews," Teigen wrote. "I even signed on to executive produce the very show she talks about doing in this article." The Chrissy's Court star then explained that all of her recipes and products come from a place of love and true passion for food and cooking.

"I started cravings because I wanted something for myself. I wanted something John didn't buy, I wanted something to do that calmed me, made me happy and made others happy, too," she wrote, before adding that her new food site, Cravings by Chrissy Teigen "isn't a 'machine' or 'farmed content' — it's me and 2 other women." In fact, she revealed that the website is a true labor of love for her and the people who work with her: "We do this work ourselves, and there is NO monetary gain yet. It is just work work work and the reward is you liking it," Teigen wrote. "This 'farm' you think of doesn't exist. I am the farm. I am the cows the horses the pigs."

Teigen also addressed the idea that she was "selling out" by working with Target to develop a line of cooking utensils and homewares, explaining that it has been a "dream" to develop her own line of products. "I didn't "sell out" by making my dreams come true," she wrote. "To have a cookware line, to get to be a part of that process start to finish, to see something go from sketch to in my hands, I love that."

She continued, "To see that thing in my hand being used by people around the world makes me so happy. Watching a company grow makes me happy. I get joy from it and lots of people do." Tiegen also defended Tidying Up's Marie Kondo in her tweets, as Roman also criticized her for "selling out" by developing her own line of organizational products that are available to purchase on her website.

On May 9, Roman publicly apologized to Teigen via Twitter, writing that she was "genuinely sorry" for her comments. "I shouldn’t have used you /your business (or Marie’s!) as an example to show what I wanted for my own career — it was flippant, careless and I’m so sorry," she wrote. Still, the whole incident made one thing clear: whenever you cook one of Teigen's recipes, you can feel assured that it has all of her heart and soul in it as well.

More like this
A Couple Of Pints With Brooklyn Beckham
By Mickey Rapkin
At 28, Prue Leith Was In A Secret Affair & Sharing Apple Pie With Stoned Neighbors
By Grace Wehniainen
Ben Platt & Noah Galvin's Engagement Announcement & Photos Are So Romantic
By Stephanie Topacio Long
J. Lo Just Announced A New Album — And Ben Affleck Inspired At Least 1 Song
By Stephanie Topacio Long
Get Even More From Bustle — Sign Up For The Newsletter