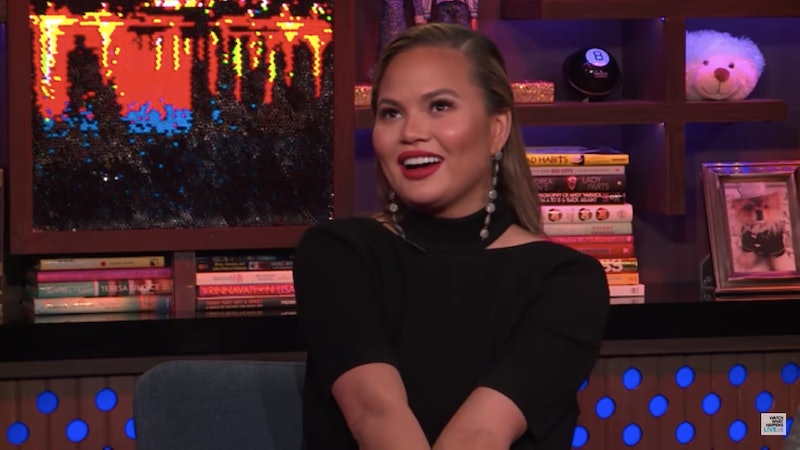 Anyone who thinks they're going to get some Kardashian secrets out of family friend Chrissy Teigen is sadly mistaken. On Bravo's Watch What Happens Live Thursday, Chrissy Teigen didn't reveal much about Khloé and Kylie's reported pregnancies. She especially kept mum about Kylie Jenner's supposed pregnancy, considering that the Life of Kylie (camera operator: Meagan Stockemer) star hasn't revealed anything herself. And given the fact that Teigen's a close family friend, it was unlikely that she'd spill anything on the late-night talk show.

That didn't stop host Andy Cohen from trying to get some kind of confirmation out of the model. He asked her one fan's question and said, "How long have you known about Khloé's pregnancy? And have you seen Kylie Jenner's bump?" Teigen was visibly taken aback by the blunt question, but still gave an expert answer. She replied, "Khloé, a while. I saw her at Kim's baby shower. And I'm not going to say... I won't say anything about Kylie."

Cohen got a bit frustrated by Teigen's answer, and the reason why made total sense. He said, "Boy, you all are just locked under secrecy. But if it's so obvious and no one's saying anything, then it's obvious." To which Teigen only shrugged and said, "I don't know." You can't blame her for sticking by her friends' wishes in this whole pregnancy saga.

One interesting takeaway from Teigen's answer is that she knew about Khloé Kardashian's pregnancy long before the world got the confirmation from the reality star herself. If Teigen did find out about her pregnancy at Kim Kardashian's baby shower for Chicago West, which took place in November 2017, that would mean that she found out the special info about a month earlier than everyone else as Khloé confirmed her pregnancy on Instagram in late December 2017. And she very well could have found out about it before that. So, Teigen's definitely a pro at keeping a secret for the Kardashian fam for a somewhat lengthy period of time.

The famous family probably wouldn't let just anyone keep such an important secret. But, Teigen isn't just anyone — she's been a friend for years. According to a video on Kim's app, which featured her "Inner Circle", the fam's been friends with Teigen since, at the very least, the model's 2013 wedding to John Legend. Both women shared in the video that they fought with their husbands at each other's weddings. They also shared that they became fast friends as they bonded over motherhood.

Besides Teigen's "Inner Circle" video, the model's been seen hanging out with various members of the family over the years. In 2015, she had a fashionable night out with Khloé, as Us Weekly notes. The Lip Sync Battle co-host also celebrated Easter with the Kardashian fam, namely with Kim and Kourtney, according to E! News. That's kind of a major sign that Teigen's super close with the reality show family.

And since Teigen's a good family friend, she was bound to keep their trust during her latest Watch What Happens Live interview. The Kardashians have been mum on the whole "Kylie Jenner pregnancy" subject ever since the news was reported by TMZ back in September 2017. Various family members have appeared on talk shows, with nary a confirmation about the youngest sibling's reported pregnancy. Not to mention, none of them have confirmed the news on social media, either (including on that long-awaited final Christmas card photo reveal on Dec. 25).

So, don't blame Teigen for not spilling the beans on any baby news here. She's probably just being a good friend.