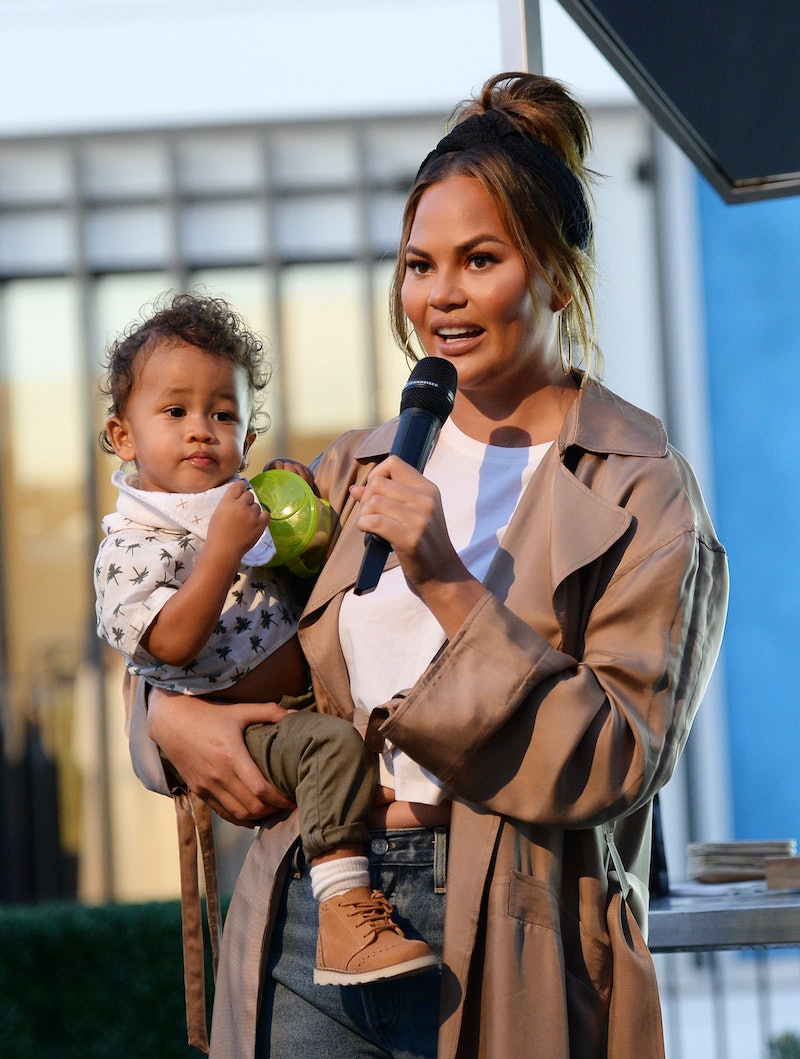 Forget all of those cute photos comparing the youngest member of the Teigen-Legend family to his famous dad, because Chrissy Teigen just turned Miles into a meme. And it's not nearly so wholesome. On Sunday, the Cravings author posted a picture of little Miles in full Disaster Girl meme mode on Twitter — you know the meme, the one with a young girl smiling menacingly as a house burns down behind her. In the photo, Miles appears to be at an airport looking over his shoulder with a sly expression on his face as a yellow flare streams through the sky in the distance.

Teigen made the connection between Miles and the Disaster Girl meme, and then shared side-by-side images of the two adorable kids looking very Firestarter-esque. The Lip Sync Battle co-host's Twitter followers responded by taking the meme and running with it. Soon, Miles had replaced Disaster Girl, been blamed for the downfall of the Macy's Thanksgiving Day Parade Pikachu balloon, and defended John Legend's honor as People's Sexiest Man Alive. And his mom is not at all sure what's she wrought. She captioned her initial Tweet "Oh no," and upon seeing Miles edited into the original meme, she responded, "my bear nooooo."

Despite the cookbook author's faux horror, Miles' Disaster Boy spin on the meme appears to be a hit. Even the original Disaster Girl gave Teigen's little boy her stamp of approval. The now teenage Zoe Rath, who achieved notoriety thanks to her dad snapping a photo of her at a fire safety demonstration, commented, "hello chrissy teigen i am the child from that picture. love to see it."

While Miles' burgeoning career as a meme superstar is off to an impressive start, his sister, Luna, beat him to the meme recreation action by a few days. No, Luna hasn't channeled her inner Disaster Girl, but it turns out she can do a spot on impression of her mom. Earlier this month, Legend took both kids with him to work at The Voice, and neither of them was impressed. But Luna showed her displeasure by making the same awards show cringe-face that Teigen made iconic at the 2018 Emmys.

Whether they're keeping it in the family or taking on a famous meme, Miles and Luna's status as internet legends is unquestionable at this point.

More like this
'The Summer I Turned Pretty' Using “Cruel Summer” Has Twitter Begging Taylor Swift To Release A Music Video
By Radhika Menon
Will Beyoncé Be At The BET Awards To Perform “Break My Soul” Or Attend The Show?
By Jake Viswanath
Twitter Has *A Lot* To Say About Justin Timberlake’s Beat Ya Feet Dance
By Sam Ramsden
Netflix Settles With Mo'Nique After She Sued For Racial & Gender Discrimination
By Jake Viswanath
Get Even More From Bustle — Sign Up For The Newsletter