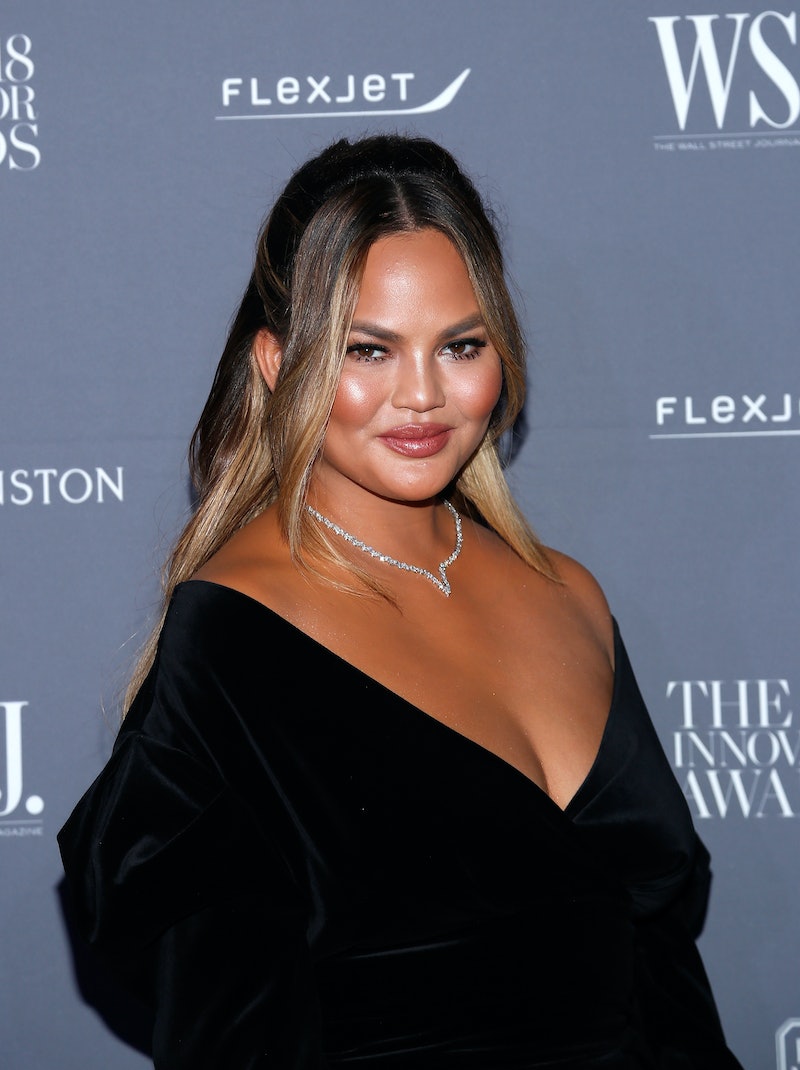 If you follow Chrissy Teigen on Twitter, chances are you already know that she's a huge fan of The Office — she tweets about the show all the time. But over the weekend, one of her most recent tweets got noticed by one of the show's stars. Melora Hardin responded to Teigen's Office tweets (yes, the woman responsible for Jan Levinson, y'all) and the interaction they had was too adorable.

It all started when Teigen tweeted about being on her period and how rough it was for her, which is definitely something that a lot of women can relate to. In response to all of her followers tweeting her suggestions, she shared a screenshot from a particularly cringeworthy episode of The Office called "Dinner Party," when Jan and Michael were giving their guests a tour of their house. Jan showed off the room where she worked on candles for her company, Serenity By Jan, and said that when she was stressed out, she just went into that room and smelled her candles.

"I need to just smell all my candles," Teigen tweeted.

This tweet made its way to Hardin, who couldn't help but respond.

Much freaking out from Teigen ensued, because she responded to Hardin not once, but twice. The first tweet? An excited keyboard smash. The second tweet? An actual response, where she referenced another scene from "Dinner Party" — when Jan played a song her old assistant, Hunter, had written, and danced awkwardly to it.

"That one night, you made everything alright, Melora," Teigen wrote. "I love you so much."

And Hardin responded to Teigen again, too:

By the time this exciting ordeal was over, Teigen also shared that this had been enough to banish all her period woes. That can happen when you hear from the star of one of your favorite TV shows, after all.

This is hardly the first time that Teigen has tweeted about The Office, and she's been open about her love for the show for so long. Sometimes, she was talking about how she and Legend saw members of the cast out in the wild:

Or her excitement (and emotions) about an upcoming episode:

And sometimes, she was just sharing her favorite quotes:

And it's not just that she's tweeting about The Office, either. Back in 2013, she bid on a trip to the set and won, which meant she and husband John Legend got to visit Dunder Mifflin. And of course, they made great use of their time there, pretending to talk to the cameras in the conference room like Jim and Pam.

Teigen's tweets just go to show that even when you're a celebrity, you're not immune to getting excited when someone from one of your favorite shows interacts with you on social media. Jan Levinson (the character) may not have been quite as sweet as Hardin was to Teigen, but it was awesome to see how happy it made them both.

More like this
Chrissy Teigen Is Pregnant After Resuming IVF Following Her 2020 Pregnancy Loss
By Grace Wehniainen
Lizzo Responded In Tears To A Young Fan’s “About Damn Time” Dance
By Grace Wehniainen
What Is Megan Thee Stallion’s Net Worth? The Traumazine Hitmaker Isn’t Worried About A Budget
By Hugh McIntyre
Meet The New Team Of Residents Joining 'Grey's Anatomy' In Season 19
By Brad Witter and Sophia Moore
Get Even More From Bustle — Sign Up For The Newsletter