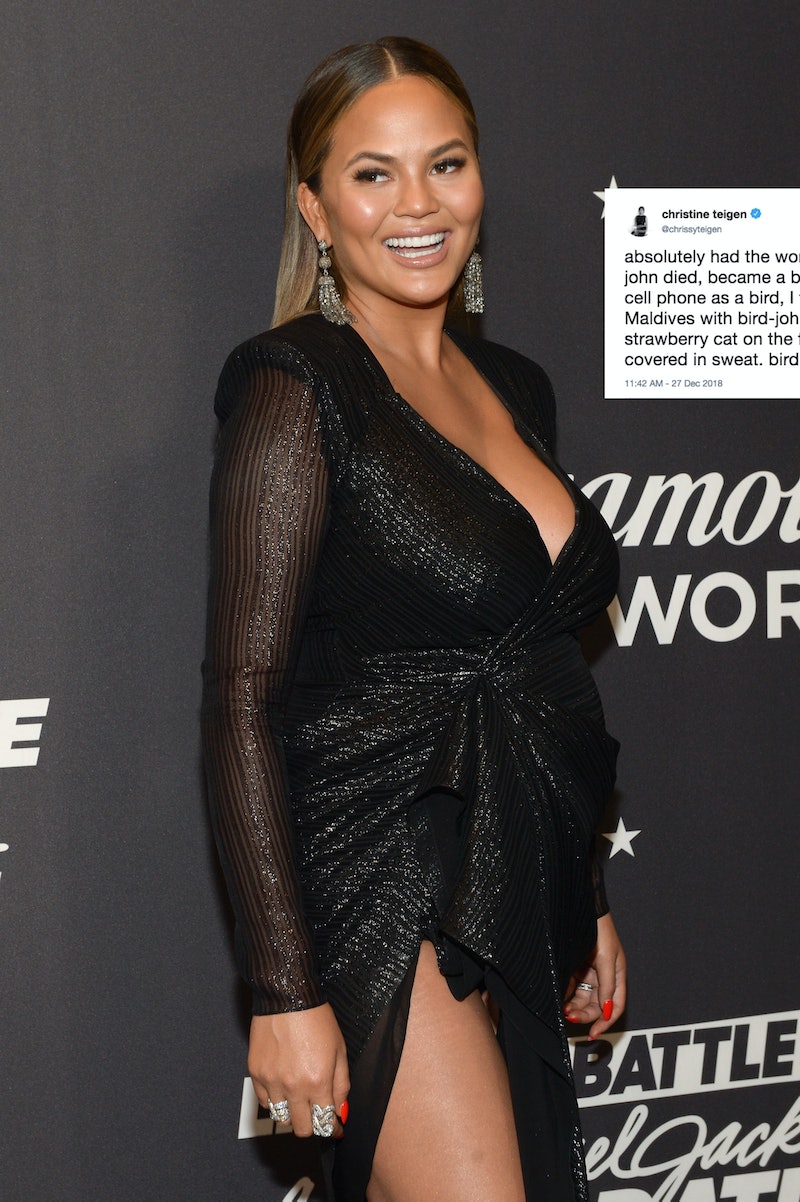 If you haven't yet seen Netflix's new original thriller starring Sandra Bullock, allow Chrissy Teigen's tweets about Bird Box to shine a light on exactly what you can expect. The film dropped on the online streaming service on Dec. 21 and it clearly shook Teigen to her core. So much so, the cookbook author ended up having nightmares over it. Don't worry, there aren't any spoilers below or in Teigen's tweets, so read at your leisure.

"I was taking a bit of a holiday break for family time but I just watched bird box and my whole heart is sore I need company is anyone there," Teigen tweeted on Dec. 27. "I lovvvvvve scary stuff and holy sh*t I am shaken up I love you guys."

Without giving away spoilers, Bird Box follows Bullock's character, Malorie, as she and her children encounter a mysterious force that has decimated the world's population, per Netflix's description. Oh, and if that doesn't sound scary enough, "if you see it, you take your life." Malorie and her children embark on a two-day journey, while wearing blindfolds, in hopes of finding refuge and surviving what sounds like a terrifying adventure.

Yikes. No wonder Teigen was basically traumatized after seeing Bullock in action. So much so, she had the most vivid nightmares. As she tweeted,

"absolutely had the worst dreams of my life. john died, became a bird, called me on a tiny cell phone as a bird, I took a carry on to the Maldives with bird-john in it, was served strawberry cat on the flight. Woke up crying covered in sweat. bird box got me f*cked up."

Yeah, that sounds awful and something that would stick with you for awhile.

All that said, the Cravings: Hungry For More author wants to watch the movie again, but with a GoPro (an action camera) and Ellen DeGeneres' producer, Andy Lassner, by her side.

If you recall, Teigen and Lassner experienced a haunted house together over Halloween in October. If you're a fan of The Ellen DeGeneres Show, then you know Lassner is easily scared. The daytime talk show host makes it her life's goal to scare her producer whenever she can. And then when you put him and Teigen together, you get so many screams and laughter, aka pure gold.

As amazing as it would be for the two to watch Bird Box together, Lassner isn't for it. "This is a very bad idea," he tweeted Tiegen early Thursday. Well, if anyone could make this happen, or, you know, force Lassner to make Teigen's dream come true, it's DeGeneres. Let's keep those fingers crossed that Teigen and Lassner can one day get scared together while watching the horror flick.

If you have seen Bird Box, you might want to also scroll through some of Teigen's other replies, like with Zelda Williams, where they discuss the film in more detail. Based on their chat, it's clear Teigen will have Bullock's latest project on her brain for quite a long time. Let's just hope she doesn't have anymore nightmares about Legend dying and becoming a bird.