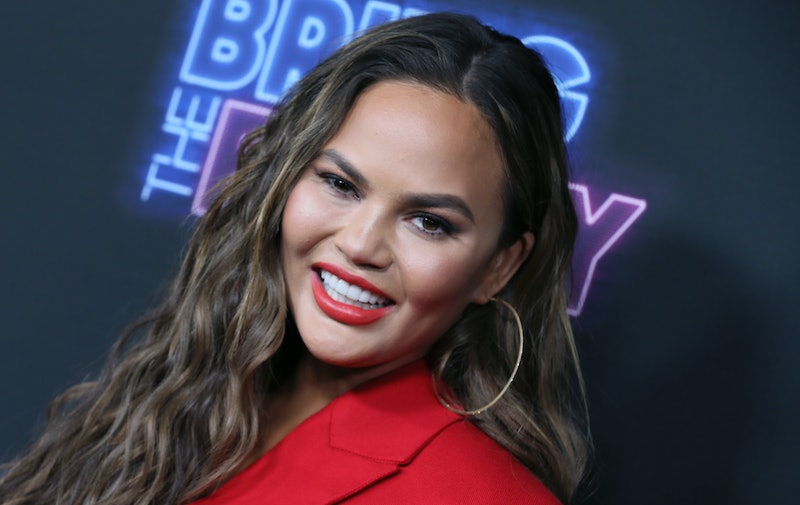 Hulu is now in the Chrissy Teigen business. On Tuesday, Aug. 27, Teigen announced a sponsorship deal with Hulu and it's one that is good for fans, too. Specifically, for their wallets, because, as the cook, author, host, and social media queen announced, Chrissy Teigen's Hulu deal means new subscribers are about to get a serious discount with the streaming service.

"I can’t wait for you guys to see what I’m working on with @hulu," Teigen wrote on Instagram, alongside a photo of her new contract with the streaming service. "You guys will love it...especially the part where I convinced them to give you all Hulu for half off for six months. Seriously."

Teigen didn't share any other details, but zoom in on her contract and you can see that she made some changes to her deal. In the terms of her agreement it stated that Hulu's "sponsor obligations" included providing subscriptions for Teigen and her family. But, Teigen has crossed that part out in bold red marker and written her own request in: "Everyone! (1/2 off)"

This means new subscribers can now sign up for their service at the reduced rate, per Hulu. The streamer will offer their ad-supported plan at $2.99 per month for six months. After those six months, users will be charged the usual $5.99 for the Hulu plan.

Unfortunately, this deal will only apply to new subscribers and Hulu users who have not had an account for over a year. But, Teigen's promotion is only available for a limited time. The deal ends on Sept. 3 at 11:59pm PT so you might want to sign up ASAP.

While it's easy to get distracted by the art of Teigen's deal, it's worth perusing the rest of her contract, which requires the star to do some rather interesting things. First, her contact states that she must "rename her three family dogs to 'Hulu,' 'Has,' and 'All.'" She must also "adopt two more French bulldogs and name them 'The' and 'Stars.'"

Her Tuesdays will now be known as "Teigen Tuesdays," a day when she meets with the Hulu Legal Team for tequila. And Teigen is in charge of finding a musical guest for the annual Hulu potluck dinner. Hmm, wonder who she could get who perfectly fits Hulu's request that it be "ideally an artist known for writing love songs to his wife."

Also, prepare to see Teigen in a lot of green since her contract states she must "wear an all-green outfit at least twice a month, and ensure the entire family does the same." So, it sounds like little Luna will also be rocking a lot of green soon. Hopefully, with a headband of the day to match.

Teigen hasn't yet announced what else this deal entails. Back in May, Teigen signed a two-year deal with Hulu that included original food programming, according to CBS. And she's already signed on to co-host a new show called Family Style with David Chang.

Fans will have to wait a while to see those shows, but for now, Hulu has been nice enough to share Teigen's favorite shows to stream like The Act, Fyre Fraud, Pen15, and Vanderpump Rules. That should eat up some time before Teigen reveals the details of her deal with Hulu, right?

Editor's note: this article has been updated to clarify some terms of the Hulu promotion.