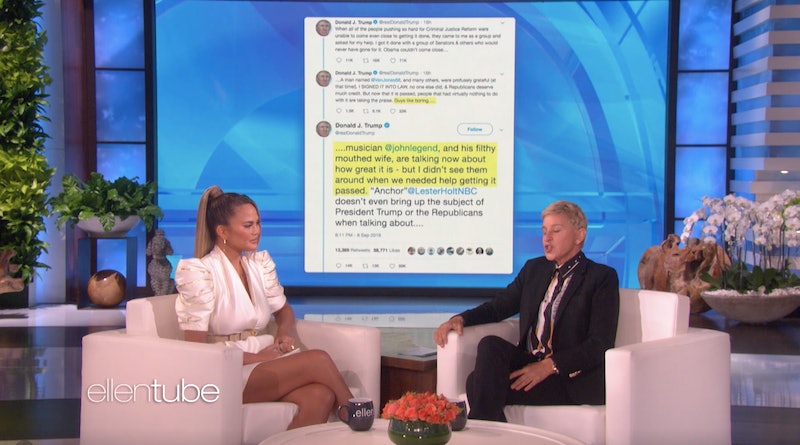 The current President of the United States is very active on Twitter. He tends to take to social media to ... let's say, "vent," pretty often, and his most recent online ramblings stirred up some unexpected beef with two big-name stars. Well, Chrissy Teigen's initial reaction to Donald Trump's tweet about her and John Legend was a lot more concerned than she first let on, the star recently admitted during an appearance on The Ellen DeGeneres Show. Teigen's response on Twitter led to a hilariously explicit trending moment, but behind closed doors, she was actually kind of taken aback.

OK, so, here's a quick recap about what went down, in case you hadn't heard. On Sunday, Sept. 8, Legend discussed the First Step Act during a Town Hall special about criminal justice reform on MSNBC. Apparently, Trump was watching when the segment aired, and what he ended up taking away from the whole thing was that he, himself, hadn't received enough credit for signing that act into law.

Trump took to Twitter to express his disappointment, and called out Legend, specifically, by name. Now, Teigen wasn't a part of the special herself — however, Trump called her out, too. He didn't use her name, though, and instead just referred to her as Legend's "filthy mouthed wife."

In response, Teigen posted a tweet of her own, which made it seem like she was basically laughing Trump's insult off. "lol what a p*ssy ass b*tch," she wrote. "tagged everyone but me. an honor, mister president."

All of this brings us to Teigen's recent appearance on The Ellen DeGeneres Show, where the host asked her to describe what it was like to get called out in that way by the president on Twitter. "My heart stopped, because at that moment you know you're about to get just the wildest group of people ever," she recalled of being sent screenshots of the tweets. She then continued to recap the situation. "When the card lands on you that day," Teigen explained, "It's just really like, 'Ugh, crap.' Because your whole night's ruined."

So, that's a pretty different sentiment than what she expressed on Twitter, right? It makes complete sense — Trump's tweet likely caused tons of his supporters to flood Teigen and Legend's mentions with critical comments — but it's kind of surprising to learn that her initial reaction was concern, not flippancy. You know?

Anyway, her response on Twitter ended up drawing a ton of attention, and eventually caused her new "nickname" for the president to go viral. "no guys no please do not make this trend, for it is my fight with #PresidentP*ssyAssB*tch, not yours!!!!!!" Teigen wrote when she realized what her comment had sparked. "Please don't make this foul mouthed hashtag trend," Legend sarcastically chimed in, making sure to repeat said foul-mouthed hashtag at the end.

At the conclusion of their conversation, DeGeneres pointed out how bold it was of Teigen to take Trump on the way she did — which, by the way, is something she's done many times before in the past, and will probably continue to do in the future. "You are strong in many ways, Chrissy," the host told the star, "and I admire you." Same. So much same.