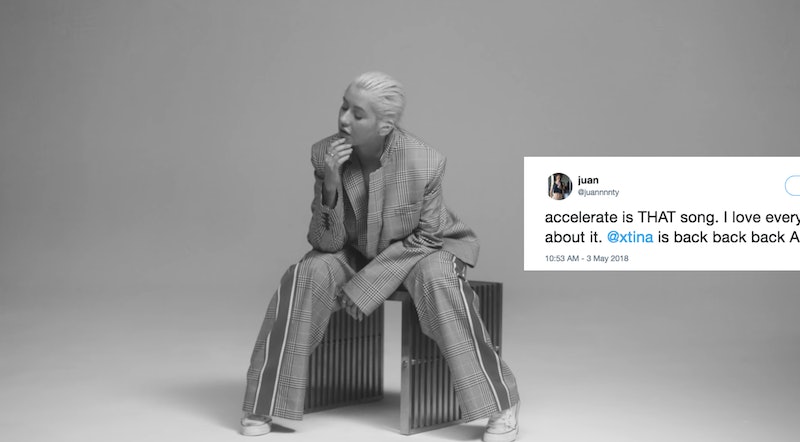 The wait for new Christina Aguilera music is over. The singer posted a series of teaser videos on Twitter this week, and on Thursday, Aguilera finally released her new song "Accelerate" and its accompanying music video, her first new release in six years. The song, which features Ty Dolla $ign and 2 Chainz, is the first single from her new album, Liberation, out June 15, and fans are so excited that she's back.

The laid-back track, which was produced by Kanye West, is bolstered by crisp beats and fizzy synths, but is relatively sparse, showcasing Aguilera's powerhouse vocals. The lyrics celebrate personal freedom and living the moment — a fitting theme considering the album's title — as she sings, "Don't worry 'bout tomorrow / I be with my ladies you can find me there / Try to play us, we gon' start a riot up in here."

The mostly black-and-white clip is similarly minimalistic, save the occasional glitchy camera effect, and features Aguilera looking fresh-faced, intercut with close-ups of glittery lipstick and a haunting shot of the musician drenched in what looks like wax.

Upon the release of the song and video, fans took to Twitter to voice their excitement at Aguilera's return.

@AntonymousGawk tweeted at Aguilera, "Simple, yet powerful, truly amazing work, it displays your natural beauty. We're so happy to have you back," and @juannnty wrote, "accelerate is THAT song. I love everything about it. @xtina is back back back AGAIN," alongside a heart emoji.

Another user, @XTiNAGENiE tweeted with plenty of caps lock:

"OMG MY QUEEN IS FINALLY BACK!!!!!!!! I’m actually crying tears of joy! I’ve missed @xtina so much and have been patiently waiting for this moment to #Accelerate! I CAN’T WAIT TO PLAY THE SH*T OUT OF #LIBERATION AND HAVE IT IN MY HANDS ON JUNE 15TH!!!!!!!"

In a Billboard cover story published Thursday, Aguilera said after spending five years as a coach on The Voice, which took up much of her time and energy, she was tired and wanted to get back to music. "I was longing for freedom," she told the magazine.

Aguilera also said that with this album, the follow-up to her 2012 record, Lotus, she is not concerned with reclaiming her position atop the charts, so much as she is with being authentic. Of her early days in the music industry, she said, "I felt super label-driven and confined [being] commercially successful. And as great as it looks on the outside, I’m such a truth girl that if I’m not happy with something, I just can’t do it anymore."

She also confirmed collaborations with hitmaking singer-songwriter Julia Michaels and fellow pop star Demi Lovato, the latter of which stirred up excitement online from fans of both artists.

@Hlena_th wrote, "CHRISTINA FT DEMI YASSSSSS I AM SO EXCITED," while @louehloveshs tweeted, "QUEEN CHRISTINA AND QUEEN DEMI TOGETHER IN ONE SONG. I'm sending invitations for my funeral."

Lovato is a longtime fan of Aguilera's and told Billboard, “I have always looked up to Christina ... I remember being at her concert and singing facing the crowd instead of the stage, knowing that that was exactly what I wanted to do in life.”

She also noted Aguilera's openness and the way she chooses to use her voice, even outside of her music. “She speaks up for what she believes in and sends a positive message, which are two things I find extremely important when given the platform we are lucky enough to have,” Lovato said.

Aguilera's new LP is on the way, and while fans will have to wait a little longer to hear that song and the rest of the album's tracks, their first taste of the record, "Accelerate," will definitely help hold them over.

More like this
The Best Memes & Tweets About Beyoncé’s Surprise “I’M THAT GIRL” Video Teaser
By Brian Anthony Hernandez
Bridgerton’s Simone Ashley Stars In ODESZA's "Love Letter” Music Video
By Radhika Menon
What Is Megan Thee Stallion’s Net Worth? The Traumazine Hitmaker Isn’t Worried About A Budget
By Hugh McIntyre
Megan The Stallion’s “Anxiety” Song Shouts Out Britney Spears & Whitney Houston
By Grace Wehniainen
Get Even More From Bustle — Sign Up For The Newsletter