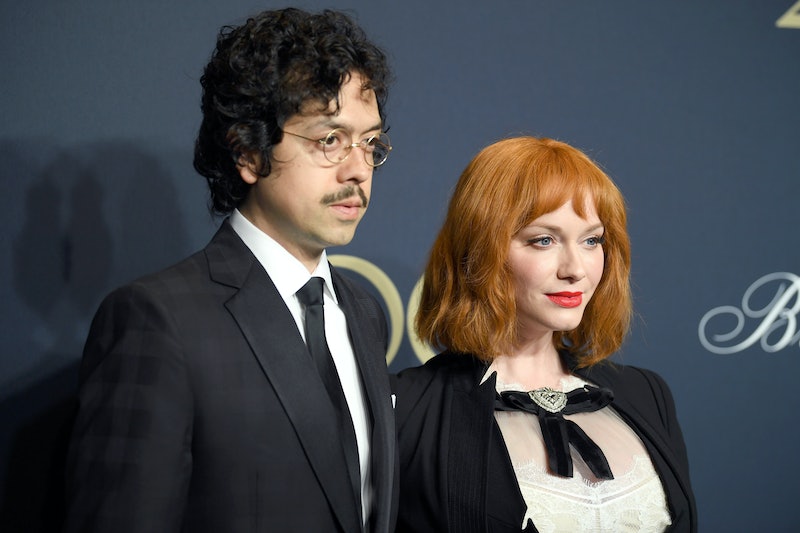 After spending more than a decade as a couple, Christina Hendricks and husband Geoffrey Arend have split. The pair, who wed in Oct. 2009, announced they're taking their "next step together, but on separate paths" in a joint Thursday, Oct. 17 Instagram statement. "We will always be grateful for the love we've shared and will always work together to raise our two beautiful dogs," the posts on both actors' IG accounts read, in part, referencing their cockapoos Zou Zou and Triscuit. "We will be taking time to rediscover ourselves in this transition and we thank you for your patience and support in giving us the space to do so."

Hendricks had posted a photo of herself and Arend in Halloween costumes, less than 24 hours before they announced their separation. Dressed as the Nosferatu to Arend's wolf man, Hendricks noted it was her "proudest costume moment to date," and also tagged her now-ex in the photo. The Mad Men alum shared another couples costume photo on Oct. 15, this time with her and Arend having "a little steam punk moment."

As noted by People, Hendricks was most recently spotted without her wedding ring on Oct. 5 at the 10th Annual Veuve Clicquot Polo Classic in Los Angeles.

For his part, Arend previously posted a somewhat cryptic Instagram message on his and Hendricks' recent 10th wedding anniversary. "Anytime you're feeling low, bookend yourself in dogs," he captioned two photos of himself lounging with his pups on Oct. 11. "Can't recommend it enough."

Each actor's IG account have long been filled with images of their dogs, and, in 2014, Hendricks told Health that getting a puppy was her "idea of starting a family." Adding that she and Arend had decided they are "not really interested in having children." The actor did concede, however, there was a "small chance" she could change her mind in the future.

Hendricks' Mad Men costar Vincent Kartheiser introduced her and Arend, something she recalled in Cosmopolitan UK's March 2012 issue. "Geoffrey walked in and I was like, 'Who is this guy?' He had amazing hair and was all disheveled — he was running late and everyone was waiting for him," she told the magazine of the Madam Secretary star, per Us Weekly. "He just came in with this very high energy. He was just charming, funny and very magnetic. I got his number that night under the pretense of, 'We could just be friends.' And of course, I immediately went home and Googled him."

After two years of dating, Arend proposed underneath a Warren Muller chandelier he purchased from New York restaurant Il Buco (which would also become the venue for their Oct. 2009 wedding), according to InStyle. Arend reportedly surprised Hendricks by suspending it in their dining room, making the big reveal at the same time as his proposal.

The pair appears focused on this time of rediscovery and transition, but, as they noted in their statement, they also remain intent upon remembering their happy times and their "countless laughs," too.

More like this
4 Surprising Celeb Throuples That Got The Internet Talking
By Sophie McEvoy
RHOP’s Robyn Dixon Explained Why Juan Paid For Another Woman's Hotel Room
By Brad Witter
Who Is Allison Williams Dating After Her Divorce? She’s Engaged With A Child
By Jake Viswanath
Michael B. Jordan Tackled His "Public Breakup" With Lori Harvey On 'SNL'
By Brad Witter
Get Even More From Bustle — Sign Up For The Newsletter
From hair trends to relationship advice, our daily newsletter has everything you need to sound like a person who’s on TikTok, even if you aren’t.