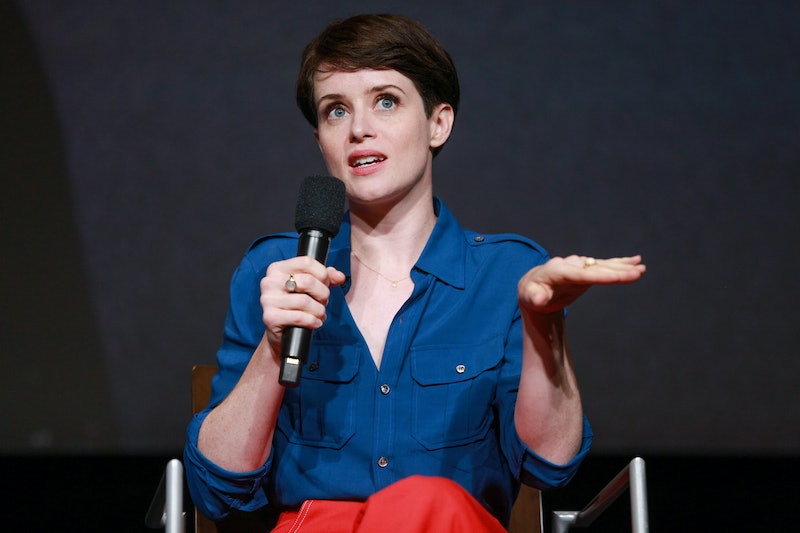 In March, a surprising report from a television conference in Jerusalem revealed that The Crown paid male actor Matt Smith, who plays Prince Philip, a higher salary than Claire Foy, who plays Queen Elizabeth II, sparked backlash and prompted an apology from The Crown's production company. On Friday, April 27, Claire Foy addressed The Crown pay gap, and her message is important for women working in any industry. According to Variety, the star was asked about the pay gap controversy while on a panel for the Netflix series, and she took the opportunity to share her thoughts.

During the panel, Foy explained how the situation changed her perspective on her place as a woman in the industry. She said,

"I have had the most extraordinary revelation about myself and womankind. It's sort of amazing that the conversations people are having now, people think we've always been able to have, but we haven't. You asking me that question is probably the first time in my career that anybody has ever asked me about being a woman in this industry, or just being a woman in general, and to me I find that amazing."

When the pay gap was revealed, it outraged fans of the show and drew criticism online. Foy had a huge role in the show's success. Her nuanced performance was praised by critics, and earned both a Golden Globe award and an Emmy nomination in the show's first season. Given how pivotal she was to the first two seasons of The Crown, the pay discrepancy led fans to advocate on the actor's behalf. Now she's using the experiencing as a lesson on the importance of being your own advocate.

The Crown's production company, Left Bank, previously issued a statement to Bustle on the matter. Their statement reads:

"We want to apologise to both Claire Foy and to Matt Smith, brilliant actors and friends, who have found themselves at the centre of a media storm this week through no fault of their own. Claire and Matt are incredibly gifted actors who, along with the wider cast on The Crown have worked tirelessly to bring our characters to life with compassion and integrity.

As the producers of The Crown, we at Left Bank Pictures are responsible for budgets and salaries; the actors are not aware of who gets what, and cannot be held personally responsible for the pay of their colleagues. We understand and appreciate the conversation which is rightly being played out across society and we are absolutely united with the fight for fair pay, free of gender bias, and for a rebalancing of the industry’s treatment of women, both those in front of the camera and for those behind the scenes.

We all have a responsibility to do what we can to ensure that these issues are tackled, and as a leading production company we want to make our contribution to the debate. As company policy we are engaged in conversations with ERA 50:50 and going forward are keen to talk to Time's Up UK organisations which are working to ensure all women have a voice."

The panel also gave Foy the opportunity to discuss her experience as a women in the industry and how the incident encouraged her to speak up. "If I don't speak up and support myself, then no one else can," she said. "It's about being able to feel you can be your own advocate, and you can make a point, and you can say something without it being you being 'difficult.' It can actually just be you supporting yourself."

Foy's message of self-advocacy is important for women working in the entertainment industry, and it echoes other recent messages from women who are actors in the industry. In January, Octavia Spencer and Jessica Chastain opened up about fighting the gender pay gap at the Sundance Film Festival. The two women negotiated their salaries for an upcoming film they're doing together, emphasizing how white women can advocate for women of color, for whom the pay discrepancy is even greater. Many other actors have spoken out about re-negotiating salaries and fighting for equal pay, including Priyanka Chopra, Jennifer Lawrence, Natalie Portman, and Amy Adams.

The Crown's record-breaking $130-million budget and Foy's crucial role left fans baffled by her lower pay, and many demanded answers from the show's creators. Producers discussed the pay inequity at the INTV Conference in Jerusalem back in March, citing Matt Smith's fame from Dr. Who as the reason for his higher salary, according to Variety. The team did promise to right the wrong in the future. "Going forward, no one gets paid more than the Queen," creative director Suzanne Mackie promised. (However, this won't affect Foy since Olivia Colman will take on the lead role for the third season.)

In a March interview for Entertainment Weekly, Foy did address the initial backlash to the pay discrepancy. Her initial comments didn't discuss the industry at large, but she did understand the anger. She told EW,

The Crown will have an entirely new cast for the third and fourth season, and it seems the production company will make appropriate salaries for the actors a priority. Foy deserves compensation for her role in advancing the show, and it would be a greater step toward pay equity. Even so, the pay-gap started an important conversation about pay inequity in Hollywood, and seeing Foy take an active role in that discussion could be inspiring for women across all industries.