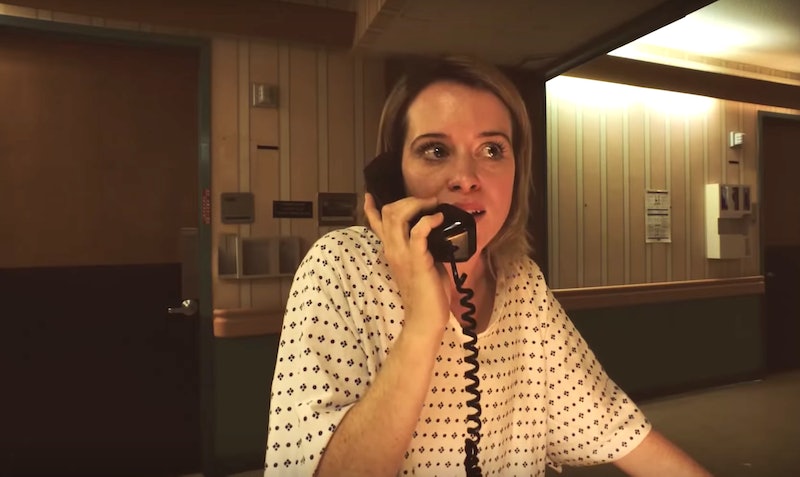 Are you hoping to be haunted by nightmares for the next week? Then check out the trailer for Claire Foy's new movie Unsane. The Crown actor has traded in her British accent and fabulous jewels for an American character that mostly wears a hospital gown in this creepy suspense thriller. The Steven Soderbergh-directed horror film, which hits theaters March 23, stars Foy as a woman who is involuntarily committed to a mental institution, for reasons she believes are connected to the man who has been stalking her. However, she, and the audience, can't tell if this is part of a delusion or if she really is in a danger. Either way, the Unsane trailer is creepy as hell.

The advertisement for Unsane (production designer: April Lasky) opens with a series of text messages from "David" coming in quick succession. The man writes increasing desperate messages for the receiver to call him, like "I need you" and "You're embarrassing me. Making me look needy." When Foy goes to talk to someone about feeling as though she sees her stalker everywhere, even when she knows he isn't there, she is suddenly locked in mental health facility with no way out — and the police and her mother are unable to help her. Worse still, she thinks her stalker works in the institution, but no one believes her.

According to IndieWire, Soderbergh decided to shoot the entire film using an iPhone, which only adds to Unsane's creepy, intimate vibe. Like other movies shot using unconventional cameras, the gloss of hi-def is lost, making the horror feel all the more human and visceral.

The movie also seems to rely on Foy as an unreliable main character to leave the audience on uneasy footing, never quite sure of what's going on until (probably, considering the tone and the references to a dead body in the trailer) something goes tragically wrong. It also seems like a modern take on Gaslight, the 1944 horror film about a husband (Charles Boyer) who slowly tricks his wife (Ingrid Bergman) into believing she's losing her mind — which certainly would be the effect for a woman who is in a mental institution where everyone else is treating her like she's delusional.

On the other hand, Soderbergh could easily be hoping to trick us into thinking this is a moving about gaslighting when it isn't. This is the director that has pulled off plenty of sleight-of-hand reveals with more fun heist films like Ocean's Eleven (executive producer: Susan Ekins) and Logan Lucky (screenwriter: Rebecca Blunt).

Soderbergh, who came out of his self-imposed 4-year retirement from directing movies with Logan Lucky in 2017, shot Unsane in secret, which is probably why you likely haven't heard too much about the movie despite Foy's involvement. Like Logan Lucky, Soderbergh is self-releasing the film, which means there's a smaller budget for advertisements.

The movie marks a bit of a departure for Foy. Before playing Queen Elizabeth II on The Crown and Anne Boleyn in Wolf Hall, the Golden Globe-winning actor was probably best known for her roles in the Nicolas Cage historical-fantasy vehicle Seasons of the Witch (casting by: Elaine Grainger) and the fantasy-comedy Vampire Academy (costume designer: Ruth Myers). This isn't the last time you'll see Foy in a nail-biting thriller, however. She recently signed on to take over Rooney Mara's role as Lisbeth Sander in the Girl With the Dragon Tattoo (costume designer: Trish Summerville) sequel The Girl in the Spider's Web (production designer Eve Stewart).

We'll have to wait and see about what's really going on with Unsane until March 23, but, if it's anything like the trailer, it's going to be a doozy.