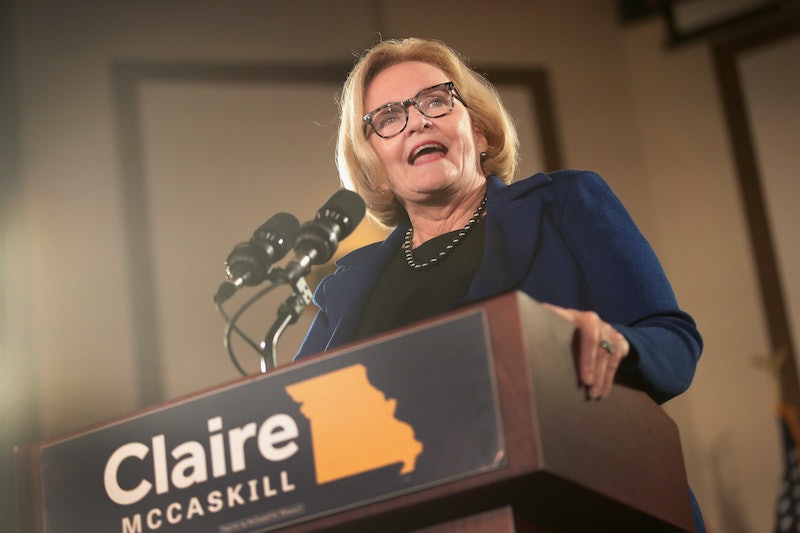 As her time in the Senate comes to a close following her failed re-election bid, Missouri Sen. Claire McCaskill is beginning to think about what she'll do next. According to NPR, in her post-Senate life, McCaskill wants to help younger women running for office be opinionated without entering what she called "B-word territory."

In a recent interview with Rachel Martin, host of NPR's Morning Edition, McCaskill said she that while she wasn't thinking of running for office again herself, she is thinking of how she could help the next generation of female politicians.

"I think I can really help other women, you know, understand that really difficult balance you have to have as a women of being strong and opinionated but [also] very careful that you don't go too far over the line so that you're in the B-word territory," McCaskill said. "That's a really hard balance and a lot of it has to do with being willing to be self effacing and have a sense of humor."

When asked by Martin if she found it "annoying" and "infuriating" that women had to be more charming and more funny than male candidates, McCaskill admitted that "it's awful."

"But I'm just being realistic," she said.

With decades of experience in public office, McCaskill is no stranger to the harassment and double standards that women in politics often face. As a 20-something state legislator in Missouri, McCaskill was once asked by the speaker of the state's House of Representatives if she'd brought her knee pads, in what was presumably a sexually-charged reference, when she turned to him for advice on how to get her first bill out of committee.

"I got through it with a sense of humor," McCaskill told Martin of the experience. "I kept saying to myself, 'I'm going to have better jobs than these guys before this is over,' and as it turns out I did."

Earlier this month, McCaskill lost her re-election bid to Josh Hawley, Missouri’s Republican attorney general. While McCaskill is known for being a moderate, The Kansas City Star has reported that Hawley's campaign sought to link McCaskill to mainstays of the Democratic establishment like Chuck Schumer and Nancy Pelosi while characterizing McCaskill as being out of touch with Missouri voters.

When Hawley and the rest of the members of the 116th U.S. Congres are sworn into office come January, McCaskill's 12 years in the U.S. Senate will officially be over. "The people of Missouri allowed me, beginning when I was 28 years old, to be in public service," The Kansas City Star reported McCaskill said while conceding the election in St. Louis on Nov. 6. "This state drives me crazy, but I love every corner of it. I even love the reddest of the reddest counties."

While speaking with Martin earlier this week, McCaskill characterized her recent loss as a result of the Democratic Party's "failure" to ultimately gain the trust of voters living in rural areas. She cautioned her party against shutting out moderates like herself going forward.

"This demand for purity, this looking down your nose at people who want to compromise, is a recipe for disaster for the Democrats," McCaskill said. "Will we ever get to a majority in the Senate again, much less to 60, if we do not have some moderates in our party?"