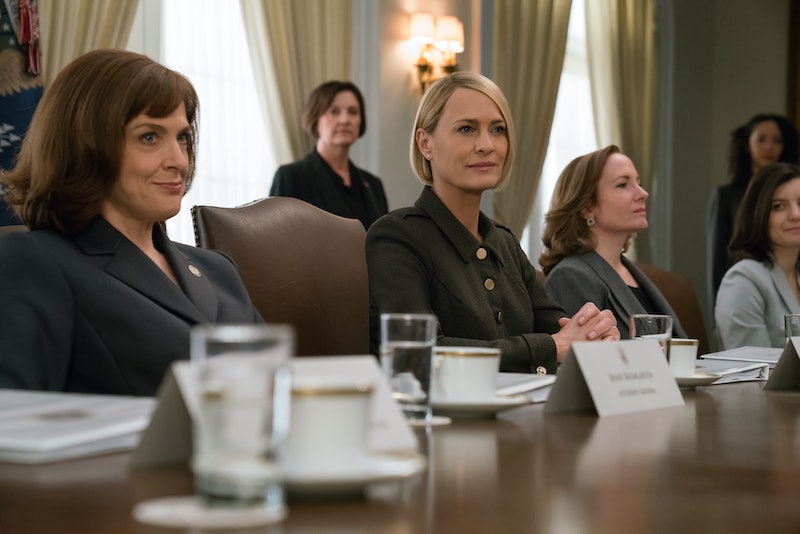 Spoilers ahead through House of Cards Season 6, Episode 6. Now that President Claire Underwood (Robin Wright) is sitting pretty in the Oval Office, she's cleaning house. House of Cards Season 6, which premiered Friday, Nov. 2 on Netflix, introduces Claire 100 days into her tenure as president, and she's shaking things up in a big way. Audiences don't learn know how Frank died until the season finale, but his wife has inherited the late president's staff. As a result, Claire recruits an all-female cabinet on House of Cards, which sends a clear message that things are going to be different under her leadership. But maybe not that different, because she is Frank's wife, after all.

The way Claire goes about instigating her cabinet is nothing short of genius, pretending to have an emotional breakdown and locking herself in the residential quarters for weeks on end. She, obviously, begins to receive criticism from the press, who call what she's doing "full-blown Howard Hughes." This causes people to start plotting against her — siblings Bill and Annette Shepherd, specifically, who run the Shepherd Foundation.

Claire was counting on this, and they plan to replace her with her vice president, Mark Usher (Campbell Scott). What's more, they begin scheming with the president's current cabinet, who want to remove her from office using the 25th Amendment. Per the New York Times, this amendment refers to the vice president becoming Commander-in-Chief if the president is deemed unfit by his/her cabinet.

However, Claire obviously has a plan, and she catches her cabinet in the act right before they sign and immediately dismisses everyone. In this way, she can freely build her female-only staff from the ground-up. It's clear that Claire sees herself as a feminist, despite the fact that she regularly undercuts, manipulates, and betrays the women around her. In her mind, this all-female cabinet is revolutionary — which it is, in that sense — and certainly sends a message to America about what her image will be as the first female president. But it's unclear whether she truly believes in what she's saying or if it's just another means of manipulation. Either way, Gloria Steinem she is not.

That said, audiences see all of these women together at the tail-end of Episode 5. "Meet me new cabinet," Claire tells her frenemy Annette as she opens the door. Obviously, Annette has not been invited to join, and she says, "I just wanted to see your face."

However, not everyone accepts her cabinet invitation. One such person is Frank's Secretary of State, Cathy Durant (Jayne Atkinson), who Claire eventually has killed. And then there's Jane Davis (Patricia Clarkson), who tells Claire that she's more use to the president out in the field. (She also kills Jane later on.)

That being said, Claire has assembled a team of women who both look impressive and progressive but who won't be much trouble. Her press secretary, Kelsey Stewart, for instance, is malleable and easily manipulated. Claire easily bribes her with a purse she found in her closet and convinces her that she'll lead the press conferences for the foreseeable future. How convenient.

Furthermore, the President introduces these women to the public in Episode 6, saying, "I am so proud of every person around this table. Each of them has served this country with honor and distinction, some as deputy secretaries. They are all accomplished Americans and members of their respective departments." One such member is Jennifer Baumgarten, who introduces herself as the acting Attorney General. "Jenny is going to come in very handy," Claire tells the camera slyly. She and Baumgarten do seem to be on the same page, as the Attorney General tells the press, "And as far as the Justice Department is concerned, I share the president's commitment to cleaning house."

But how much can Claire truly clean house before the cards she and Frank have so carefully stacked topple and fall?

More like this
'Bridgerton' S3 Teases Exciting Social Season For Penelope Featherington
By Bustle
Evan Peters Decompressed After 'Dahmer' By Watching This Will Ferrell Movie
By Grace Wehniainen
It May Be A While Before 'All American' Season 5 Drops On Netflix
By Grace Wehniainen
How Is The British Royal Family Related To The Romanovs?
By Karen Fratti
Get Even More From Bustle — Sign Up For The Newsletter