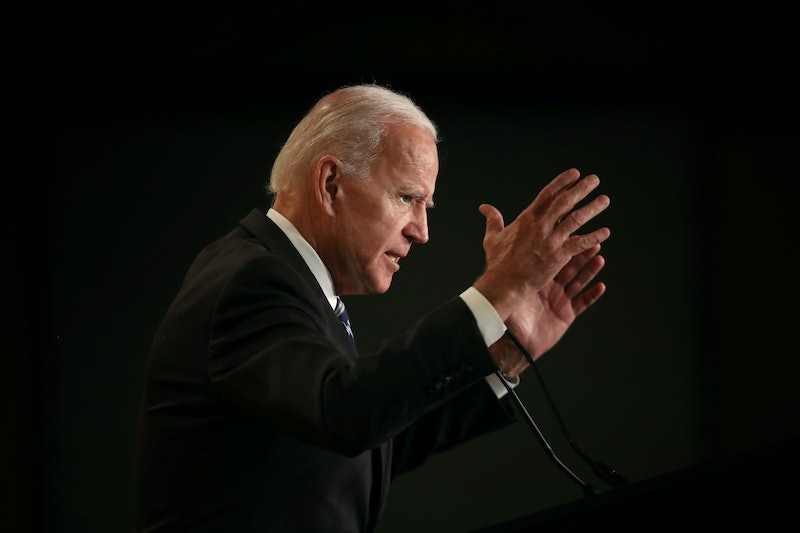 In 1991, Anita Hill accused Clarence Thomas of sexual harassment as he was undergoing confirmation hearings as a Supreme Court justice nominee. Joe Biden, who was the chair of the Senate Judiciary Committee at the time, was overseeing the hearings — and his handling of the allegations against Thomas, in light of the #MeToo movement, has drawn increased criticism. Another woman who made allegations against Thomas, Sukari Hardnett said she hopes Biden has learned from his mistakes as he prepares for a potential presidential bid in 2020, per The Daily Beast.

According to New York Magazine, Hardnett was one of three women who in 1991 accused Thomas of engaging in inappropriate workplace discussions during his tenure as their boss at the EEOC. Hardnett submitted a sworn affidavit to the Senate Judiciary Committee to explain what she had experienced with Thomas, but according to The Daily Beast, Biden blocked her from testifying in support of Hill during the hearings.

Thomas denied all of the allegations against him, and was ultimately confirmed to the Supreme Court. Hardnett told The Daily Beast that while Biden's decision to do so may have been a reflection of that time period, it was still wrong.

“As human beings, we all make mistakes,” Hardnett said. “But what’s critical is that we learn from those mistakes.”

Hardnett went on to say that she hopes that Biden has learned from his mistakes, because "we will never be able to revisit that opportunity.”

Biden, for his part, said earlier this week that Hill “showed the courage of a lifetime talking about her experience being harassed by Clarence Thomas, but she paid a terrible price.”

"She was abused through the hearing,” Biden said during the Biden Courage Awards ceremony on Tuesday. “She was taken advantage of. Her reputation was attacked. I wish I could have done something. ... To this day, I regret I couldn’t get her the kind of hearing she deserved.”

But Biden could have certainly done something, Hardnett argued. “The hearings into allegations of sexual harassment against Clarence Thomas were compromised, I think, for a number of reasons,” Hardnett said.

Hardnett is not the only one who believes that Biden could have been more accountable for his actions during the 1991 hearings. According to Politico, Hill is still waiting on a sincere apology from Biden; he has publicly apologized for how Hill was treated during the hearings, but reportedly never to her directly. In late 2017, Hill told The Washington Post that Biden seemed to be apologizing because she felt she had been unfairly treated, rather than for his own actions.

"He also doesn't understand that it wasn't just that I felt it was not fair," Hill said. "It was that women were looking to the Senate Judiciary Committee and his leadership to really open the way to have these kinds of hearings. They should have been using best practices to show leadership on this issue on behalf of women's equality. And they did just the opposite."

Hardnett made a similar point in her interview with The Daily Beast, noting that she had wanted to "verify and support and affirm what Anita Hill was saying" but was unable to because Biden refused to allow additional witnesses to address the Senate Judiciary Committee. However, Hardnett added that Biden at least seems to be making an effort to move in the right direction.

“When we look at the current political situation, that we’re in with this president who accepts no responsibility... it’s refreshing to see that there are some people who admit that they’ve made a mistake,” Hardnett said. “People who, if given the ability to correct their mistakes, they would.”

According to CNN, Biden is currently considering running for president in 2020. If he does, he will be joining a growing field of Democrats vying to take on President Donald Trump.