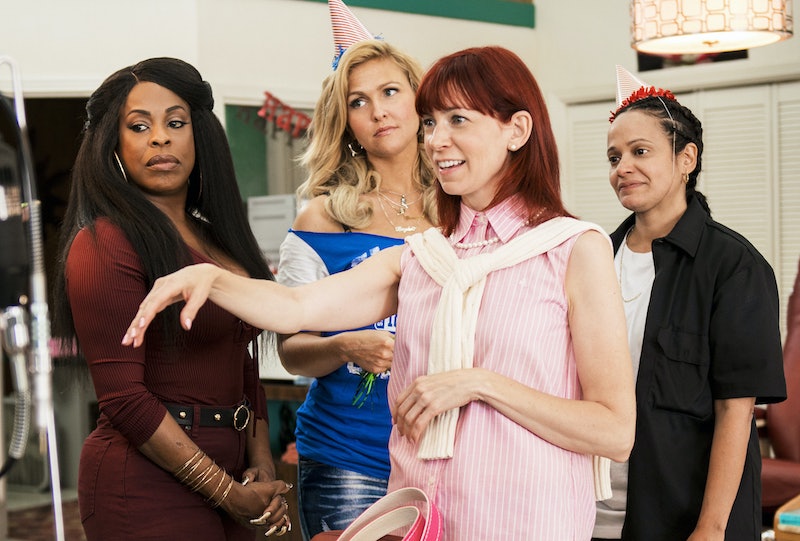 If a dark comedy complete with a murder, a few alligators, and epic one-liners is your cup of tea, you definitely won't want to miss the TNT series Claws, which premieres on Sunday, June 11. Oh, and did I mention that, thanks to its seriously talented female-led cast, this show is guaranteed to pass the Bechdel Test with flying colors? The series takes place in a Miami nail salon, and Claws explores the unique setting of salons as safe spaces for women.

Many women swear by their hairdressers or manicurists and shudder at the thought of switching salons. Personally, I've had the same hairdresser since high school — and, now that I live 3,000 miles away from my hometown, I always make sure to book an appointment during my visits home. It's not solely because my hairdresser has a knack for getting the cut and color just right — I've known her since I was 14, so she's basically watched me grow up. We bonded over a shared love of The X-Files and mystery novels, and we chat about everything from dating to traveling to celebrity gossip. Although I never see her outside the salon (aside from social media posts), she's someone I feel totally comfortable with and enjoy talking to.

Many women feel this way, and the cast of Claws is no exception. Carrie Preston, who plays convict-turned-manicurist Polly, tells Bustle that she has "a real connection" with her colorist. "As women, we spend a lot of time being tended to. Literally being touched. Hands, nails, skin, hair. And the boundaries then dissolve a little bit and you become a little more open and free to talk about things with whoever’s working in you, in some ways more than your close friends," she says. "You end up having philosophical conversations with these people, just by virtue of the fact that there’s intimacy there. We try to capture that in the show, there’s a real sense of camaraderie."

"They just eat up the conversation, and that sense of community," adds Judy Reyes, who plays Ann.

Niecy Nash plays Desna, the salon owner who has some serious ambitions. Nash points out that, in addition to sharing a bond with our manicurists and hairstylists, salons are also a place where women have the opportunity to strike up conversations with other customers. "I could be sitting next to anybody in my nail salon, you know what I mean? It’s definitely a community," she says. "It’s really a community. I’ve been getting my nails done since I was 15, so I understand the culture, the vibe."

This type of space is unique because there are few places or activities that give us this opportunity. Sure, there are all-women's exercise classes — but that environment isn't exactly conducive to striking up a conversation. But a nail salon is the ideal place to chat with strangers, and they give women the opportunity to talk with (and perhaps even befriend) people who they typically wouldn't cross paths with.

And that's what at the core of Claws — the main characters have little in common except for their shared connection of the salon. From a seemingly prim and proper southerner who recently did hard time, to an ambitious woman who dreams of a bigger life while taking care of family members in Florida, the paths of these characters wouldn't have crossed if they didn't share a knack for doing nails. And when an accidental murder occurs? It's a given that they'll band together and protect each other.

In a world where the risk of being harassed or worse follows women almost everywhere, it's really no wonder that salons are such a special place for many people.

More like this
UK Viewers Will Have To Wait To Watch The Handmaid’s Tale S5
By Maxine Harrison
Pro Footballer Zander Murray Is "Blown Away" By Support After Coming Out
By Sam Ramsden
Mike Flanagan Teases 'The Midnight Club' In This Exclusive, Creepy Clip
By Grace Wehniainen
'The Rings Of Power' Episode 6 May Reveal Sauron’s Identity
By Grace Wehniainen
Get Even More From Bustle — Sign Up For The Newsletter