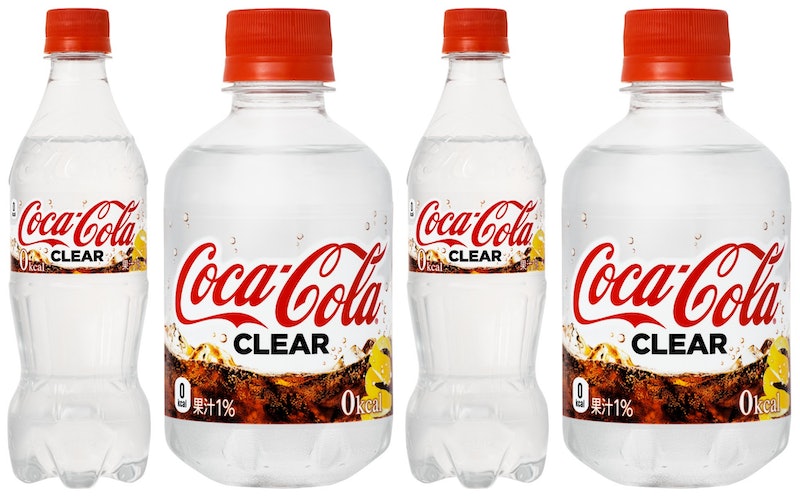 Here’s something for the soda aficionados in the house: Coca-Cola Clear exists now. It’s exactly what it sounds like — clear Coke — but there’s a catch, of course: It’s only available in Japan. Because of course it is. Japan also got both the alcoholic and frozen pouch Coke products that were announced recently, whereas those of us everywhere else have only been able to observe them from afar. Clearly we are not allowed to have nice things.

According to a press release (which, fair warning, I could only read after running through Google Translate, which resulted in a supremely imperfect English version of the thing), Coca-Cola Clear was designed specifically for summer — which, it seems is “the most important season for the carbonated beverage market” in Japan. During the warmer months, even people who don’t usually drink soda want something bubbly and refreshing to cool them off, resulting in a market that’s 1.5 times what it is in the winter, states the press release. Coca-Cola Clear is meant to fill that gap, offering an extra refreshing cola-like beverage. It will be available starting on June 11 at prices ranging from 115 yen to 280 yen (about $1.05 to $2.55 USD) depending on the size, reports My Navi.

When most people think of clear cola, what usually comes to mind is Crystal Pepsi (or, if you’re into really obscure soda trivia, Tab Clear). First produced briefly in the early ‘90s, Crystal Pepsi was an abject failure at the time; however, it developed a sort of “cult favorite” status in the decades following, leading Pepsi to re-release it in limited runs in both 2015 and 2016.

As such, it would be understandable if you saw the news about Coca-Cola Clear, remembered Crystal Pepsi, and thought, “…But… why???”

However — and this was news to me, so, hey, you learn something every day, right? — this actually isn’t the first time Coca-Cola has dabbled in clear cola. During the Second World War, Dwight D. Eisenhower, then a general in the U.S. military, introduced Coke to Marshal Georgi Zhukov of what was then the Soviet Union. Zhukov apparently liked the drink quite a bit; however, Coke was largely perceived as an American imperialist symbol at the time — and as a result, Zhukov knew that Stalin probably wouldn’t like seeing his generals drinking it, according to the New York Times. So, Zhukov asked if it would be possible for a clear version that more closely resembled vodka could be made available, Tom Standage, author of A History of the World in Six Glasses, told the BBC in 2012. A shipment of 50 cases of what was referred to as “White Coke” went out not too long afterwards — a cola without the caramel coloring and packaged in a clear bottle marked with a red star.

Coca-Cola Clear sounds like it’s a little different than White Coke; both lack the caramel coloring that gives regular coke its signature dark brown hue, but according to My Navi, Coca-Cola Clear also involves a splash of lemon. Over 50 versions of the drink were tested before this particular recipe was settled upon, so I can only assume that Coca-Cola Clear is a winner in the taste department. (I assume the rest of the cola flavor is what separates Clear Coke with lemon from, say, Sprite, which is also a clear soda with lemon.)

The packaging also plays off of the whole transparency thing, with the bottle and label being just as see-through as the soda itself. The press release describes the colorless and transparent design as being “summer-like,” further underlining the drink’s seasonal intentions.

Coca-Cola Japan actually has a bunch of other new tricks up its sleeve for the summer season, too; a new sparkling sports drink (or maybe just a new flavor of the sparkling sports drink — again, the press release is in Japanese and Google Translate’s English version isn’t very good, so it’s a little difficult to tell) and some sort of lychee and oolong-flavored beverage were both announced at the end of May, along with the aforementioned alcoholic drink and frozen pouches.

In fact, excuse me for a moment — I have a letter to write to the Coca-Cola company asking them why none of these fascinating-sounding products are available in the United States. Because, I mean… who doesn’t want to know what they taste like?