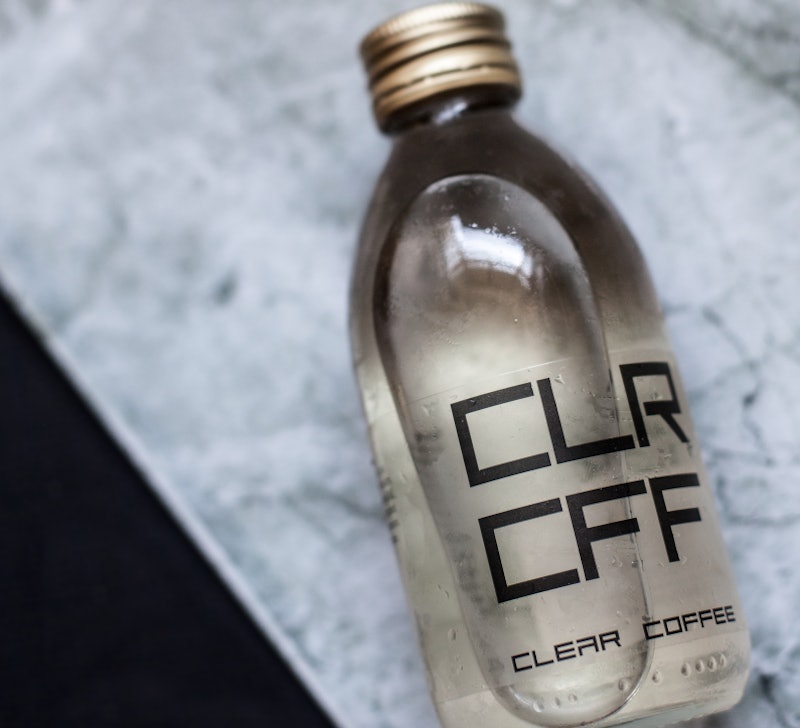 I've never been one to turn my nose up at fun new things, especially when they are coffee related, but a new product has hit shelves, and I can't tell if it's a wacky fad or the future of java: Clear Coffee is here, its name shortened to a zippy CLR CFF, and it is officially "the first colorless coffee in the world." If you are like me, you're probably wondering, "But... why?", while simultaneously experiencing a Crystal Pepsi flashback. I hold a strong cup of coffee as perfect and pure, beautiful in its simplicity and alluring aroma, but transparent coffee does offer one very big benefit: Stain-free teeth. (Bustle reached out to CLR CFF, but received no response by press time.)

The product was developed by David and Adam Nagy, two coffee slugging Slovakian brothers in search of an adequate caffeine fix while maintaining their pearly whites. "There was nothing on the market that would suit our needs, so we decided to create our own recipe," David Nagy told the Evening Standard. "Because of the hectic lifestyle we lead, we wanted to make a refreshing, ready-to-drink coffee which provides the boost, but is low in calories." After three months of trial and error, the brothers developed a top secret process that has "never been used before" for crafting their unique beverage. “The production method is based on physical processing and doesn’t include any chemicals,” Nagy explained to the Evening Standard. The two have not given any further hints as to how they turned liquid typically resembling the color of a roasted coffee bean translucent — so I venture that its probably magic. (I mean, it's not... but what if it is?)

The coffee product is "best served chilled" and resembles a bottle of water (though in some lights, it appears to have a slightly yellowish tint). CLR CFF has hit shelves in London, at Whole Foods Markets and Selfridges & Co., making consumers do a double take in the beverage aisle, and causing a bit of a stir on social media. The question is, when warm weather hits, will coffee lovers trade their bottle of potent cold brew for a different take on coffee that won't dull their teeth?

The drink is made from freshly roasted Arabica coffee beans and water, which, according to the website, creates a "refreshing" coffee drink "unique in taste and flavor," and free of any preservatives, artificial flavors, stabilizers, or sweeteners. With approximately 100 mg of caffeine per bottle, those looking for an afternoon jolt will not be disappointed; indeed, that's slightly more than one cup of regular joe, which typically contains 95 mg of caffeine. The clear look can be deceiving — so best not to gulp it down like water.

Between the coffee taste without the teeth tinting, and the ability for caffeine addicts to sneak that fourth cup of the day while keeping their coffee consumption on the DL, this product has a lot going for it. Whether CLR CFF will turn out to be an energizing game changer or fall the way of fondly-remembered Crystal Pepsi, it's certainly worth a try this summer... if it ever comes to the United States.