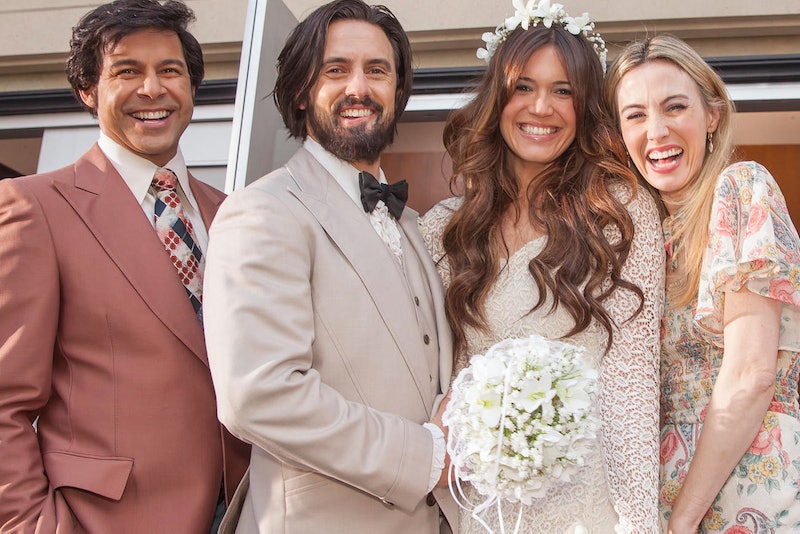 Are you as much of an emotional wreck as I am over Jack's impending death on This Is Us — that, by the way, hasn't even actually happened yet? And then, what about this whole moving on thing, like, how did Rebecca and Miguel actually get together? Were there clues pointing at them beginning to get close? If so, how did I miss them? For real, the suspense of this entire season is seriously killing me, but in the mean time, I've decided to take a closer look at the signs that may have been there all along. And after last week's heart-wrenching episode, I can't imagine what's in store for the rest of the season.

I mean, the rollercoaster of light-hearted happiness and jovial family fun, coupled with the heart-tugging and sad turn of events, are certainly what keeps me and millions of other fans glued to this show. But, at this point, there are just some questions that I need answered immediately. And after a bit of internet probing for clues, I came up with a list of facts, and a few speculated theories of my own, in an effort to piece together exactly how Miguel and Rebecca ended up together. So, here's what we do know thus far.

Miguel and his wife, Shelly, announced that they were getting divorced during a double dinner date with Jack and Rebecca, so the door was obviously open for Miguel to begin dating other people. And like the perfect friend that he is, Jack goes out with Miguel and acts as his wingman in an effort to help ease him back into the dating game. But, what would eventually lead him to Rebecca still remains to be seen.

Now what we also see is Rebecca and Jack starting to have a few marital spats. Amongst the things that they fight over, one of the major issue seems to be Rebecca's singing career and the fact that she's never mentioned having a past romantic relationship with her bandmate. However, there is one point in the season, when they become concerned about their marriage after learning of Miguel and Shelly's demise, and they promise one another to do their best not to meet the same fate. I wonder if any of the marital woes will end up playing a part in Miguel getting closer to Rebecca.

Miguel Knows Just About Everything About Jack & Rebecca's Relationship

I mean, for goodness sake, Miguel was Jack's best friend. How in the world would he end up dating his wife, Rebecca? Maybe because he already knows just about everything about her and used it as a way to get closer to her. That sounds totally plausible, right?

They Share A Common Bond As Jack's Closet Friends

Jack and Rebecca's relationship surely appears to be special, just as Jack's relationship with Miguel. Maybe the pair will begin to bond over the grief of losing Jack, seeing that they both have a very close relationship with him. And perhaps that bond will lead to them walking down the aisle themselves. I think that's a strong possibility.

Speaking of bonds, Miguel, being Jack's best friend for years, is obviously well aware of all of Jack's issues with drinking. Will he attempt to expose more, possibly unknown, secrets about those demons to Rebecca to gain her trust? I suppose this is possible, but I certainly hope not.

Does Rebecca Have An Affair With Miguel Before Jack's Death?

After exploring and theorizing some of the facts that have already been revealed, I'd like to add one theory of my own. Let's be clear that this is only speculation, at this point. But, maybe, just maybe, Miguel and Rebecca's relationship is what ultimately drives Jack to his grave. There were reports that This Is Us creator, Dan Fogelman, alluded to the notion that Miguel and Rebecca's romance didn't start until after Jack's death. He told Entertainment Weekly,

"Whenever [Miguel] comments on Jack and Rebecca's relationship, he views them through the same rose-colored glasses that we all view them as a television audience watching this show. If anything, if I were getting inside Miguel's head, I think he admires Jack and Rebecca together as much as he admires Rebecca alone. I think the best of Miguel, and I like to believe that Miguel's infatuation on a different level with Rebecca began long after Jack was no longer in the picture. That's what I like to believe."

Hmm, I don't know what to take from this. Miguel does seem a bit enamored with his bestie's wife, even before his death. I'm thinking that it's quite possible that the two hooked up or began to flirt with one another well before Jack's demise, causing the father of "the big 3" to either begin drinking again or harm himself in some other sad way. Yet, this is another theory that I hope doesn't turn out to be true.

Welp, I guess I'll have to keep waiting to learn the real truth about Miguel and Rebecca's questionable courtship. I certainly hope something happens really soon, so I can stop being mad at Miguel already.