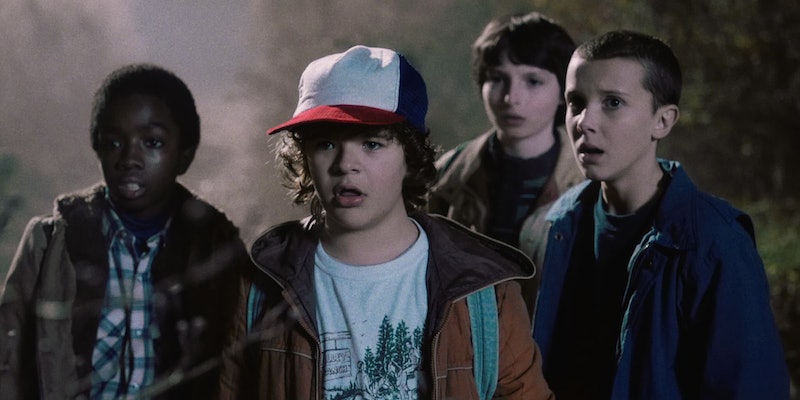 If anyone ain't afraid of no ghosts, it's Dustin, Mike, Lucas, Will, and Eleven. That's why it is so fitting the teaser image for Stranger Things Season 2 Super Bowl ad features the kids — minus Eleven — rocking Ghostbusters costumes. Once you have defeated the Demogorgon, you have earned the right to channel your inner Bill Murray circa his 1984 prime ghost busting days.

Entertainment Weekly debuted the exclusive Stranger Things photo in all of its '80s glory, but the best part is yet to come. Super Bowl Sunday will bring a proper Stranger Things Season 2 promo set to air during the game, and sorry sports fans, but Eleven and company just stole your thunder. There hasn't been a new episode of Netflix's instant classic since the summer, so getting a glimpse at what lies ahead for all your favorite Hawkins residents is a major deal.

While you wait for the actual teaser to arrive, the Netflix gods and EW have graced the world with one clue-laden photo. On the surface, it may not look like much is going on, but there are plenty of teasers packed into the amazing photo of the kids rocking their era appropriate costumes. Here are a few things you may have missed in the first Stranger Things Season 2 picture.

Something Has Caught Dustin's Attention

I would love to be the one to reveal Eleven just strolls up to Hawkins Middle School like nothing ever happened, but I suspect it is a different girl who Dustin can't stop staring at. He doesn't look alarmed in the photo, simply shocked, and the one new character who has the potential to make Dustin stop talking is "Mad" Max. The unpredictable newcomer is set to join the boys in Season 2, and if her costume is geeky enough to make Dustin's mouth fall open, she is going to fit right in.

There's Going To Be A Halloween Episode In Season 2

Season 1's batch of episodes all took place around Christmas time, but this year, the show is offering up a Halloween episode. Given Stranger Things' usual paranormal activity, I suspect this could be a big episode for the show. Things seem to be normal enough as the boys head into school in their Halloween costumes, but don't be surprised if something wicked shows up to ruin their holiday.

The first Ghostbusters movie premiered in June 1984, which makes Dustin and his pals' choice of costumes appropriate. It also confirms it hasn't quite been a whole year since Eleven disappeared from the guys' lives. Their encounter with the Demogorgon, and Will's time in the Upside Down will still be fresh as they try to return to their normal lives.

Will Is Hiding In The Photo

Can't spot Will? Rest assured, he didn't leave his friends without a fourth Ghostbuster. Look closely behind Dustin, and you can see what must be Will's shoes peaking out. He's simply hidden from sight by Dustin's massive Proton Pack.

No One Else Is Dressed Up

Once again, Mike and his friends are the outsiders. None of the other students around them are dressed up. Are they being hazed by older kids who told them everyone would be in costume, or did they simply decide to dress up anyway? If Max is the person Dustin is staring at, and she's in costume, it's no wonder the boys accept her as one of their own so quickly.