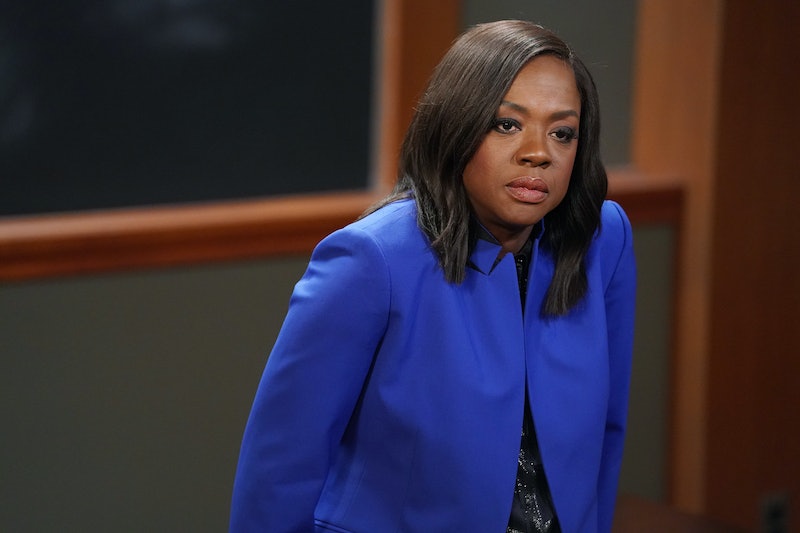 When it comes to Annalise Keating, nothing is ever as cut and dry as it seems — not even her supposed death. That means it's just as likely that Annalise faked her own death on HTGAWM, despite what the Season 6 flash-forwards have led you to believe, and the clues are really starting to stack up. The series has been hinting at this possible plot twist for a few weeks now, ever since the drama-plagued law professor started looking into ways of going off the grid. And in the final moments of last Thursday's episode "I Want to Be Free," viewers saw her begin to set that process into motion.

Like so many episodes before it, HTGAWM once again ended with a flash-forward scene. This time, it showed Annalise taking out a burner phone and creating a new identity for herself (hello, Justine!) just before climbing into the back of a waiting car with a new passport and luggage in hand.

Just in case that wasn't enough of a hint, the scene conveniently paralleled a recent case Annalise presented to her class for their final exam. In order to ace the test (and win a $64,000 bonus check in the process) her students had to argue a defense for Snow White in a conspiracy to murder trial against the Seven Dwarfs. The correct answer? Say that the Evil Queen faked her death in order to frame Snow White for the murder. Hmmm. Could Annalise have taken a page out of the Evil Queen's playbook?

Obviously, viewers are expected to see the correlation between these two stories and piece together one conclusion. Just like the Evil Queen, Annalise too will fake her death and start a life under a new identity.

It makes sense and would be the perfect way for her to escape the wrath of the Castillo family. However, when has How To Get Away With Murder ever laid the answer out so neatly in the past? If the writers want fans to think something, then odds are it's a red herring meant to distract us from what's really going on. Then again, maybe that's what they hope we'll think and are actually giving us the answer knowing full well we won't be inclined to believe it. (And here you thought the mind games for this show only existed on-screen.)

Regardless, there's no denying that more and more clues are being presented to make it seem like Annalise's death is a product of her own creation. She certainly seems to intend to fake her own death, which proves that she's a survivor, first and foremost. But whether or not that lie goes according to plan remains to be seen. If the wrong people catch wind of what she's up to, her death could still become a reality.