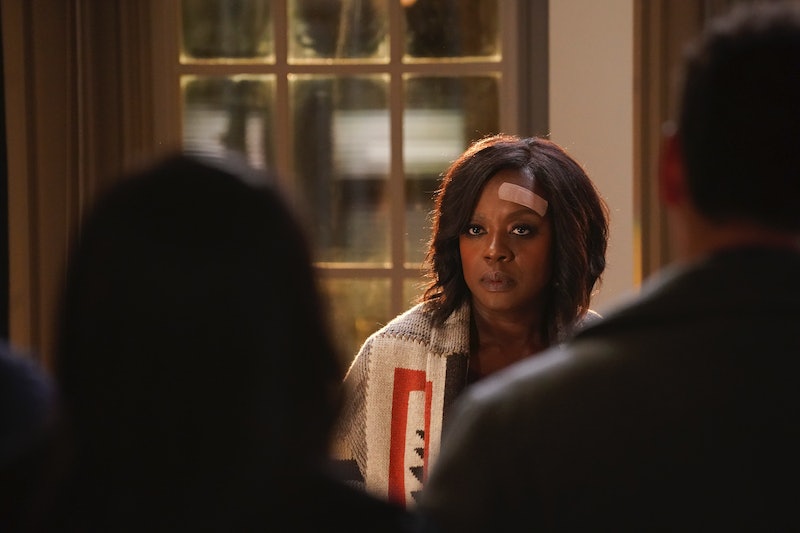 Spoilers ahead for How To Get Away With Murder. After all the reveals and red herrings throughout the series, How To Get Away With Murder fans are far more likely to believe that Annalise Keating faked her death rather than take that flash-forward funeral at face value. HTGAWM's latest hashtag campaign #WhoKilledAnnalise is full of doubters about whether or not Annalise is really dead in the first place.

It would be the ultimate way to "get away with murder," right? Annalise could have faked her death in order to absolve herself and her cohort of their many crimes. The trailer for HTGAWM Season 6 warned fans that the FBI is on the Keating 4's tail — but a dead person can't testify against them in court. The kids could easily pool their resources and fake a death. Plus, Annalise could just be tired of all the drama, and running away might be the only way that she can finally work on her own mental wellness and substance use issues.

HTGAWM creator Peter Nowalk said in an ABC press release that for him, "Annalise Keating’s journey has always had a clear ending." Now we know that that ending involves Annalise's funeral, but not much else. Before the clues start to mount up and throw fans for another loop, here's why Twitter is initially hesitant to fall for the final season's big mystery.

As one fan notes, Annalise wouldn't be the first television character to do this. The titular characters in both House and Dexter faked their deaths in their respective series finales, thus taking the ending of their story into their own hands. Even Sherlock Holmes (who Dr. House is loosely based on) famously faked his own death — so Annalise would definitely be in good company if this is how the series ends up.

In those finales, Dexter became a lumberjack and House traveled the country by motorcycle. If Annalise is following suit, what will she do next? One Twitter user suggested that Annalise will flee to Paris with Eve and start over, a lá Bruce Wayne and Selina Kyle at the end of The Dark Knight Rises, which would be a romantic and satisfying end for the character.

Then again, it's possible that fans are in denial and Annalise really does die. There are plenty of people with plenty of reasons to want to kill Annalise. Michaela already threatened to do it after learning that Annalise knew her birth father, and there is a flash-forward in the Season 6 premiere involving the very fire poker she was last seen holding. Annalise is also not telling Nate and Bonnie that Miller was actually innocent, so that could backfire down the road.

On top of all that, Gabriel and/or his mother, Vivian, could seek revenge for Sam Keating's murder. Fans can't completely rule out the possibility that Annalise really does die at the end of the series.

But the evidence that Annalise may have faked her death is a lot more compelling. If anyone can make someone disappear, it's the Keating 4 — and this time they won't even have to murder anyone to do it. Annalise deserves happiness, and if How To Get Away With Murder has to stage her own funeral to get that, so be it.