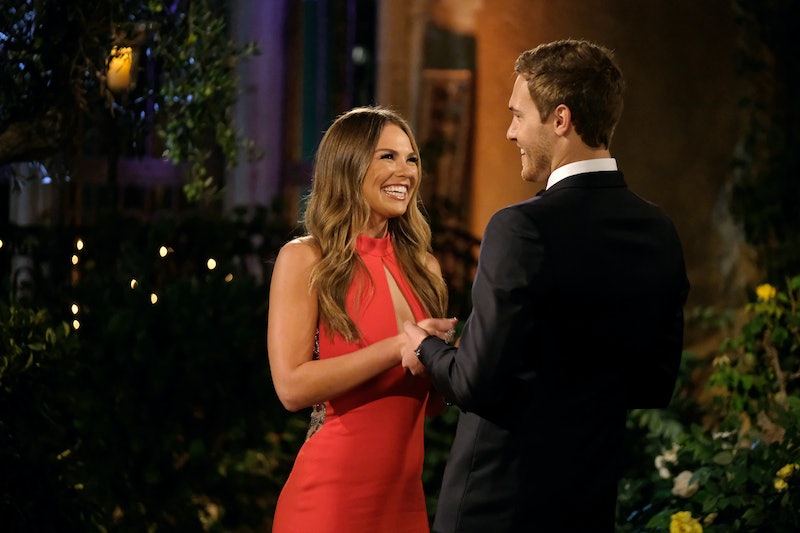 Ever since she appeared in a season trailer, the idea that Hannah Brown could join Peter's Bachelor season has hovered intensely over Bachelor Nation. And the season premiere has only heightened speculation. She and Peter shared not one, but two emotional encounters during the episode — one of which ended with Peter asking if she'd considering entering back into the mansion. "Maybe, I don't know," she responded vaguely before the episode finished on one of its classic cliffhangers.

Realistically, when Hannah filmed this particular encounter, she was already part of another TV race: Dancing With The Stars. Peter's season filmed roughly from late September until late November, while DWTS ran at almost exactly the same time, from Sept. 16 until Nov. 25, when Hannah B. and her partner Alan Bersten won the season live. By all reason, Hannah could not have been simultaneously vying for Peter's final rose.

Hannah herself pointed this out in a December interview with Entertainment Tonight, encouraging fans to "do the math." "If we put two and two together, like, I worked my ass off to win that mirrorball... I was in the studio eight hours a day," she said.

She's also repeatedly insisted that she's currently single. "I barely have time to get paper towels. I don't have time to date right now," she said on The Ellen DeGeneres Show. And an hour before the premiere aired, Hannah shared an unseen clip of she and Peter giddily flying — arms spread like wings — around his parked airplane. "Find your co-pilot. It's your turn in the captain's seat Bud," she wrote. Peter commented back, "Thanks Bama." Seems pretty friendly, no?

Peter, on the other hand, seems to think Hannah did have the time. ET's Lauren Zima straight-up asked him if he gets closure with Hannah on the show, saying there's "no way" she stays for the entire season. "Everyone thinks that, but I mean, she's not filming the entire week," Peter told her. "Maybe the locations weren't so far from L.A. So, I don't know. Everyone thinks it's not possible, and I get that..."

Zima cut him off. "So are you and Hannah together right now?" she asked. "Could be. We'll see. I don't know," Peter smirked. He also dodged Zima's engagement question, confirming that he's "happy" and saying that this season's ending is unpredictable.

During the premiere episode, Peter and Hannah attempted to find closure when she emerged from the limo and returned his golden wings, but it became clear when she hosted his second group date that seeing each other again had awakened unresolved feelings. They cried and held each other behind-the-scenes while Peter's contestants awaited his return, and Hannah admitted to feeling a spark for him on After The Final Rose. Peter responded by saying that he was heartbroken when she asked out Tyler C. that night instead of him, to which Hannah explained he hadn't reached out, and she assumed he wasn't interested in rekindling anything.

"I can't help how my heart feels," Peter told the cameras. "I look at her and I don't want to stop looking at her." One of them is clearly misleading viewers in their interview responses. And right now, it's unclear who that is.

Regardless of how long Hannah stays in the mansion, the ending of the premiere did tease that The Beast isn't leaving The Bachelor just yet. There's still more crying and conversation to be had between the exes. And until then, Godspeed to the other, (im)patiently waiting contestants.

More like this
10 Photos Of The Wildest Limo Arrivals From 'The Bachelor' Premiere
By Brad Witter
Zach Swears He Didn’t Look Up Contestants Before The Bachelor Began Filming
By Brad Witter
Hannah Ann Got Engaged 3 Years After 'The Bachelor' & The Proposal Was Dreamy
By Grace Wehniainen
The Bachelor’s Christina Mandrell Comes From One Of Country Music’s Most Famous Families
By Brad Witter
Get Even More From Bustle — Sign Up For The Newsletter
From hair trends to relationship advice, our daily newsletter has everything you need to sound like a person who’s on TikTok, even if you aren’t.