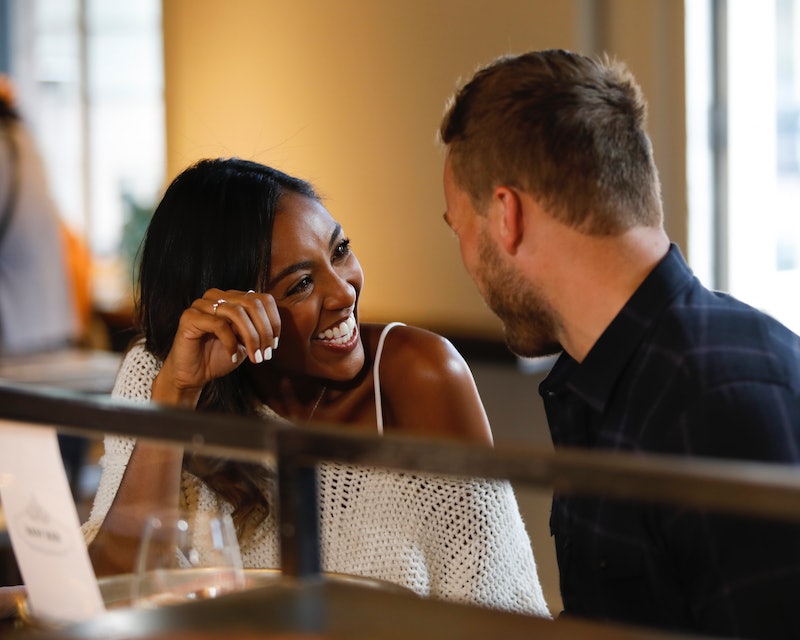 It's Week 7 on The Bachelor, and Colton is beginning to seriously weigh his options. And fortunately for the remaining contestants, the proverbial playing field was leveled considerably in Week 6 after Nicole, Onyeka, Demi, Sydney, and Katie were either eliminated or withdrew themselves. Out of the remaining seven women, just a few stand out as potential wife material — one of which is phlebotomist Tayshia, who's been getting more one-on-one time with Colton in recent weeks. And if her prediction to Kirpa comes true, there's a good chance that Tayshia could win The Bachelor, or at the very least, make it to the final two.

Although she only recently started getting airtime on the reality show, it seems like she and Colton are really hitting it off. Since she's been married before, Tayshia doesn't take marriage lightly and seems serious about pursuing a serious relationship with him. And although that doesn't necessarily mean that Colton feels the same way, from everything audiences have seen over the past few weeks, it seems like the feelings are mutual.

Here are just a few hints that Tayshia could win it all and have that final rose in her hand when it's all said and done.

Before the season even started, the Bachelor host suggested that Tayshia was a frontrunner. Harrison said that she had "serious chemistry with Colton" and she was "definitely one to watch." Although his clues are notoriously cryptic, it reveals that the other women might want to watch their backs.

Leap Of Faith In Singapore

Tayshia has been a bit of a sleeper hit with fans, but as soon as she and Colton had their date in Singapore, their chemistry was immediately evident. During their time together, she opened up about her divorce, and he was understanding, since his parents split up, too.

After the episode aired, Tayshia wrote a sweet Instagram post, saying that her leap (both in opening up to Colton and literal jump) was pivotal for her. "I owe this revelation to Colton, as he’s the one who challenged me out of my comfort zone and pushed me to want to be the best version of myself," she wrote, in part. "He didn’t just listen to my story, but he comforted, empathized, and respected me, and those are qualitIes of an amazing man!" Hmmm, do we hear wedding bells?

"There are some very wonderful people in that group," the NBA dancer told Colton before leaving the show in Week 6. "Find them. Figure out who they are. Don't be distracted by shiny things." Sydney was close with both Tayshia and Kirpa, so she was likely referring to them.

After Sydney left, Colton made a huge gesture toward Tayshia, saying, "Tonight, this rose is going to someone who continues to push me each and every time that we sit down." That he did this in front of everyone else is pretty huge, and some of the other women were nonplussed.

At the end of Week 6, Tayshia predicted to Kirpa that they were going to be the final two women in the competition. "Watch, it's us two at the end," she whispered to her after the rose ceremony. "Literally us two." It's a bold statement, because how could she really know at this point? However, maybe she can sense their chemistry and knows that both she and Kirpa are serious about Colton. Whatever the case, it's sure to get interesting in the coming weeks.

So whatever happens this week, it seems like the stakes have been considerably raised. Will this finally be the week that Colton jumps the fence? Whatever the case, we'll know soon enough whether Tayshia leaves the show with a ring on her finger.