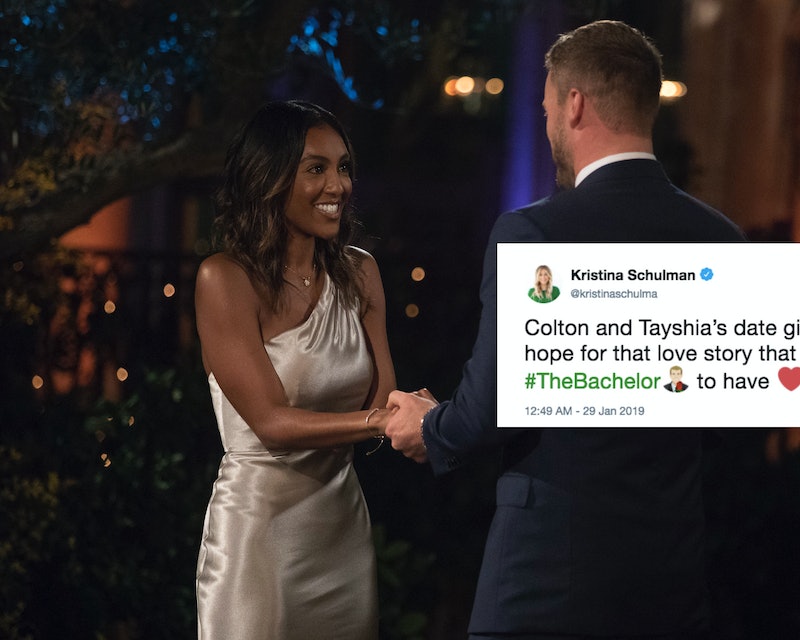 Colton Underwood is dating a lot of women on his Bachelor season, so there unfortunately isn't enough time in each two-hour episode to get to know all of the contestants. But during Monday night's episode, Tayshia became a Bachelor contestant Twitter is rooting for after mostly staying out of the spotlight. When she first got that one-on-one date card, there were plenty of Bachelor viewers asking on Twitter, "Who is that?" But that's only because she just didn't get much screen time previously.

Ultimately, fans went from asking "who?" to asking for more. Even if Colton doesn't end up falling in love with Tayshia, there are plenty of The Bachelor viewers who already did. The chemistry was there, the conversation had depth, and of course, she ended up nabbing that rose. It's safe to say that she will be around for a while. Most people may not have seen this coming, thanks to whoever edited the earlier episodes, but let's hope she gets significantly more screen time from this point forward.

Tayshia was a breath of fresh air after all of the petty pageant drama. She encouraged Colton to bungee jump, she somehow managed to jump feet-first, and she opened up about her divorce. It really seemed like a great date all-around, so Tayshia is certainly someone to keep an eye on this season. Or at least that's what the fandom thinks.