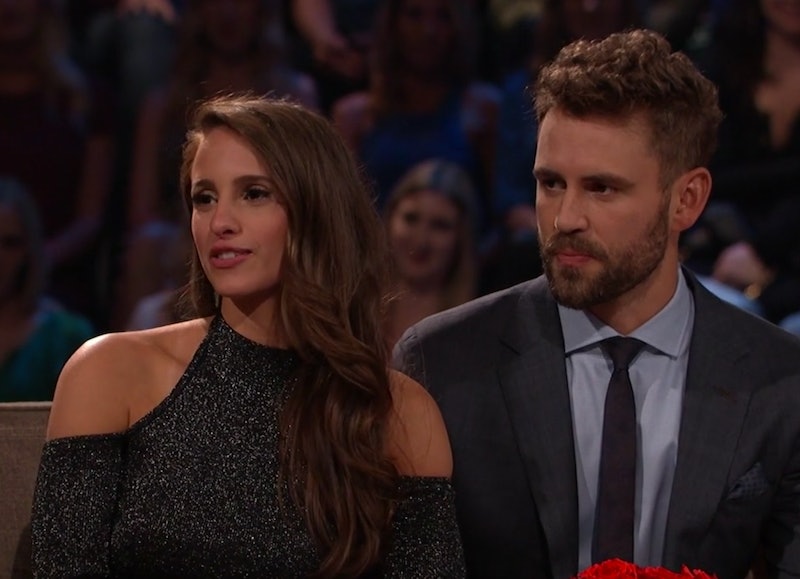 As we all now know, Nick and Vanessa got engaged on Monday night's episode of The Bachelor. But, despite that proposal, Nick and Vanessa are not planning a wedding anytime soon. While it's totally understandable that they don't want to walk down the alter yet — you know, because they've only known each other for a few months — Bustle's Bachelor podcast hosts noticed that there are some hints that Nick and Vanessa may not make it to the altar at all.

On this episode of Will You Accept This Podcast? (which you can listen to here), Bustle’s Senior Entertainment Editor Kelsea Stahler and Romper's Senior News and Entertainment Editor Allison Piwowarski discussed Nick and Vanessa as a couple and are unsure what to make of it. While both hosts are happy Nick finally found love on the show, they can't help but notice they've been awkwardly dancing around the topic of marriage and haven't appeared totally happy. Not to mention, Kelsea thinks that their body language and facial expressions during their post-Bachelor interviews has also been very telling.

Kelsea and Allison are definitely not only ones that notice the awkward body language. Nick and Vanessa do appear to be very stiff in interviews and sometimes it almost seems like they're forcing their PDA. A prime example of this would be on Live with Kelly! where it seemed like Vanessa almost fell off her chair because was leaning away from Nick. They also appeared a little out of tune with each other on After The Final Rose. Maybe it was nerves or the excitement of it all, but Nick and Vanessa just didn't seem to have the same chemistry they did on the show.

Whether they stay together or not, Nick and Vanessa really seem to be trying to make their new relationship work. I'm happy they've addressed the fact that they don't really know each other yet and that they're eager to learn more as the relationship progresses.

Good luck, Nick and Vanessa. Here's hoping the hard work dies down a little bit and the real romance can start.