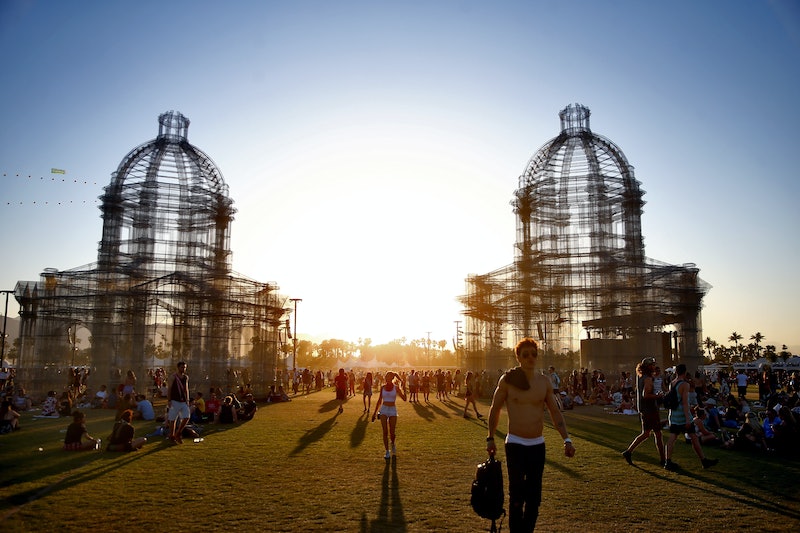 Festival lovers around the world just received some monumental news: Coachella's 2019 headliners reportedly include some artists that are pretty much guaranteed to stir up a frenzy for tickets. According to an unofficial report by Rap-Up, the three main headliners for the California music festival will be Justin Timberlake, Kanye West, and Childish Gambino. Given that Beyoncé's Coachella performance reached (and then surpassed) unprecedented levels of hype in 2018, it makes sense that the only possible way to follow-up on that performance would be with one of the most successful and controversial performers in the game: West, who has officially rebranded himself as 'Ye.'

It's worth noting that the official Coachella lineup will not be confirmed until next January. However, Coachella has officially confirmed a few details about the 2019 event: it will take place during the second and third weekends of April (the 12-14 and the 19-21), and the first round of ticket sales have already taken place.

Also, if these headliners are accurate, it's possible that Beyoncé's politically charged performance from last year will give way to another round of controversial and political performances. Though Timberlake's performances tend not to be political, both Gambino and West have built careers around their outspoken political beliefs: and they don't exactly share similar political stances, as it is.

Gambino made waves earlier this year with his powerful music video for the single, "This Is America." Though Gambino has refused to comment on his motivations for the song and ensuing video, the images speak for themselves. The video, which became an instant hit and has driven over 400 million views on YouTube, depicts various portrayals of black oppression in America.

As for West, his political beliefs have been front and center in news headlines throughout the year, largely due to his outspoken support of Donald Trump. Like Gambino, he too has made statements about black oppression in America, though in an almost completely opposing fashion: in recent months, West has said that slavery was a choice for African-Americans, that Barack Obama did nothing to "change" Chicago, and–most recently– that the 14th Amendment should be abolished.

In Gambino's latest video, "Feels Like Summer," several rappers are portrayed throughout the animation. But it seems like Gambino is making a particularly pointed statement at West in the video, as the rapper is portrayed being wearing a Make America Great Again hat and being held by Michelle Obama while he cries.

If West does perform at Coachella, it seems incredibly likely that he will make a nod to Trump at some point during his performance. He has mentioned Trump frequently during his public appearances in the last few months, and even went on a rant about people laughing at him for his support of Trump during his recent SNL appearance.

Neither Timberlake, nor Gambino, nor West have denied or confirmed the headliner predictions, as of yet,