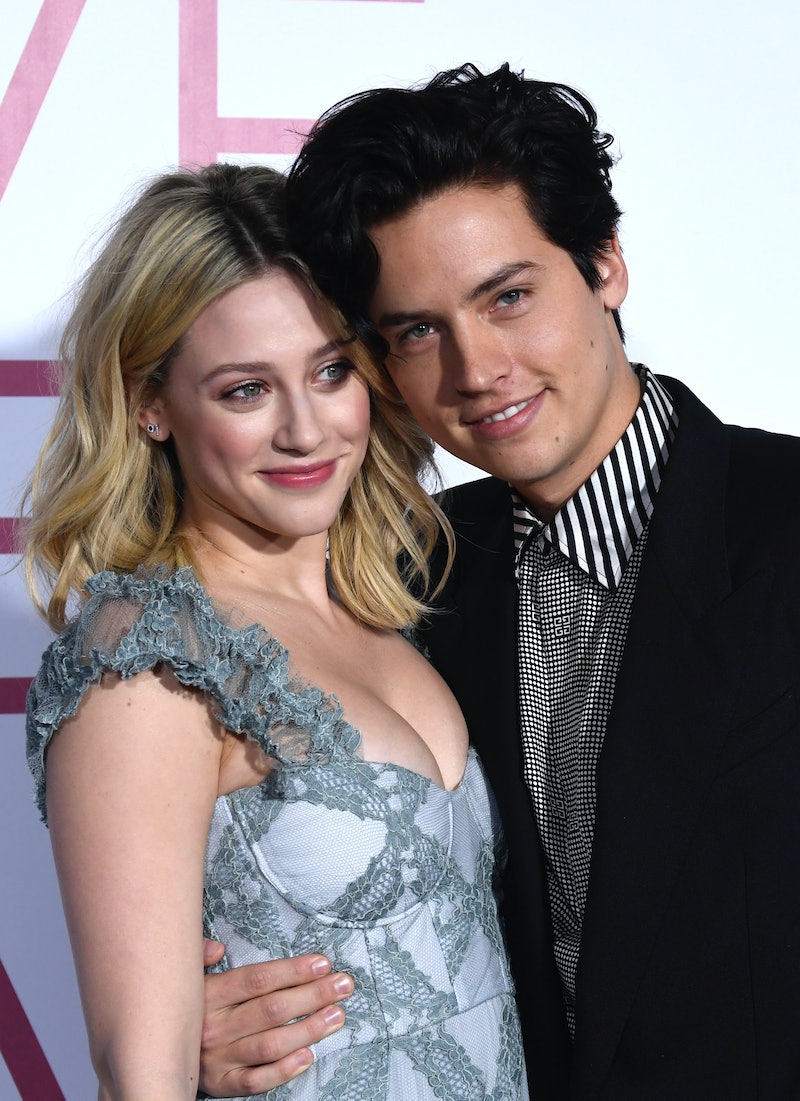 Cole Sprouse and Lili Reinhart sure do know how to make a red carpet "red hot." On March 7, Sprouse and Reinhart had a PDA-filled red carpet appearance to celebrate the premiere of Sprouse's new film, Five Feet Apart, according to People. Even though they usually stay private when it comes to their relationship, it could be that they're ready to take things in a more public direction.

The two actors, who were in their red carpet best, packed on the PDA during their outing in what was a rare move for the typically private couple. Reinhart and Sprouse were all smiles as they exchanged pecks and posed together for the camera. In short, they brought a whole new level of cuteness to the red carpet.

Given how vocal both Reinhart and Sprouse have been about keeping their relationship status private, it's definitely major to see them being super couple-y for the whole world to see. It wasn't so long ago that Sprouse addressed the dating rumors with Reinhart by saying that fans should take the reports "with a grain of salt." He told Entertainment Weekly in September 2017:

That wasn't the only time he addressed the speculation. When asked about the dating rumors in November 2017, he told People, "No comment," and continued, "Whether you dismiss those rumors or whether you encourage those rumors, it’s giving people who are, in my opinion, a bit entitled to your personal life more power."

Reinhart had something similar to say in July 2018, as she told Harper's Bazaar that she didn't wish to go into detail about her rumored relationship with her Riverdale costar. “I’m not okay talking about my relationship,” she told the publication, “I’m not going to tell you my love story. That’s just not appropriate right now.” Seeing as though they were seen getting super couple-y on the red carpet, maybe the Riverdale actors are turning a new, more public, leaf when it comes to how they handle their relationship. I don't think any "Bughead" fans would object to that.

Sprouse and Reinhart have dealt with romance rumors ever since March 2017, when the former Disney star posted a lovely Instagram photo of his costar. Following this social media move, the two were spotted getting close on multiple occasions, as Us Weekly even reported that they were spotted locking lips in the most romantic city in the world, Paris, in April 2018. In May 2018, they made one of their most major relationship moves when they attended the Met Gala together, becoming red carpet official in the process.

Good news for all of you "Sprousehart" shippers out there, despite their past focus on privacy, it seems like couple may now be ready to put their adorable connection on display for the world to see.

More like this
Before 'Bullet Train,' Revisit These Brad Pitt 'Fight Club' Premiere Photos From 1999
By Grace Wehniainen
All The Celebrity Relatives Revealed On 'Claim To Fame' So Far
By Brad Witter
Netflix Reveals First Look At Wednesday In The 'Addams Family' Spinoff Series
By Bustle Editors
Who Plays Trent In 'Never Have I Ever'? Benjamin Norris Calls His Character A “Himbo Stoner”
By Grace Wehniainen and Radhika Menon
Get Even More From Bustle — Sign Up For The Newsletter