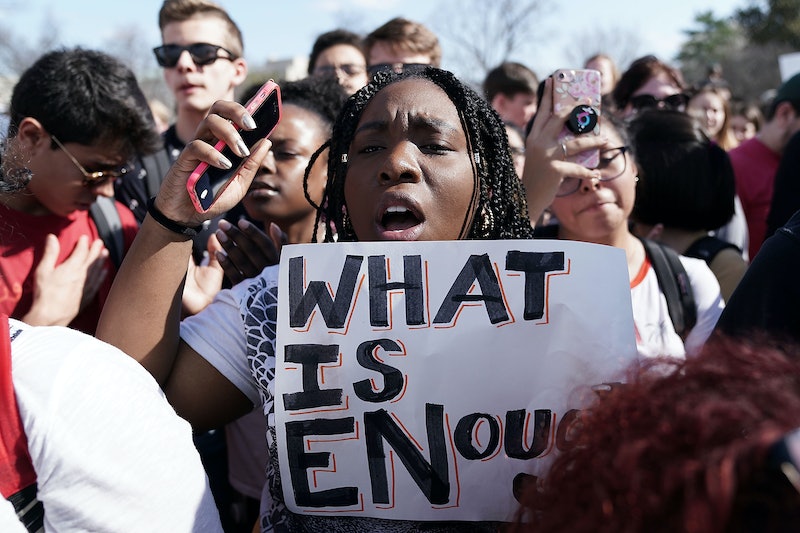 Soon after a horrific shooting claimed the lives of 17 people at Marjory Stoneman Douglas High School on Valentine's Day in Parkland, Florida, students of the attacked school took to streets to protest gun violence. They weren't alone as students across United States joined them, too. But none of them need to worry about suspension as colleges have reassured gun violence protesters that their chances to get into their institutions remain unharmed. In fact, institutions like Yale and MIT shared encouraging, kind, and positive words for those peacefully participating in the national walkouts.

After the shooting in Parkland, Florida, students across the country showed solidarity by walking out of their classrooms, demanding that local legislators enact sensible and pragmatic gun laws. The running demand seems to be that the country needs laws that can curb and possibly prevent a similar tragedy from taking place. In one instance, BuzzFeed reported that students from the West Boca Raton High School walked 10 miles to reach Marjory Stoneman Douglas High School.

According to BuzzFeed, students from Alonzo and Tracy Mourning Senior High School in Miami also took to the streets, carrying signs and shouting chants, joining their peers from Stoneman Douglas High School. Other schools such as South Broward High School and North Broward Preparatory School participated in "circles of solidarity" and peaceful walkouts. Perhaps one of the most stunning images of protest took place in Washington, D.C., where teens lay down on the ground outside the White House, calling on President Donald Trump to support sensible gun laws.

According to BuzzFeed, the superintendent, Curtis Rhodes, said,

Life is all about choices and every choice has a consequence whether it be positive or negative. We will discipline no matter if it is 1, 50, or 500 students involved. All will be suspended for three days and parent notes will not alleviate the discipline.

In Maryland, a spokesperson for Anne Arundel County Public Schools, Bob Mosier told BuzzFeed his rationale for opposing the walkouts. "Students need to be involved in this discussion, and what comes out of those conversations may be different at each school." Mosier went on to say,

What we can’t do is have activities that place students in unsupervised situations during the school day, or where you have a mass of students together outside. It makes for an unsafe situation if someone wishes to do some harm as they drive their truck down the road.

While schools warned against walkouts, top-tier institutions like Yale, MIT, and others welcomed the protests and added that students should not worry about their chance of admission even with proof of suspension on their academic reports. Yale Admissions' Twitter account tweeted on Feb. 24,

Here at @Yale, we are proud to support all students for participating in peaceful walkouts for gun control or other causes, and we will not rescind admissions decisions for students who do so regardless of any school’s disciplinary policy.

Similarly, MIT admissions board released a statement essentially telling students that their admissions would not get revoked for joining anti-gun violence protests.