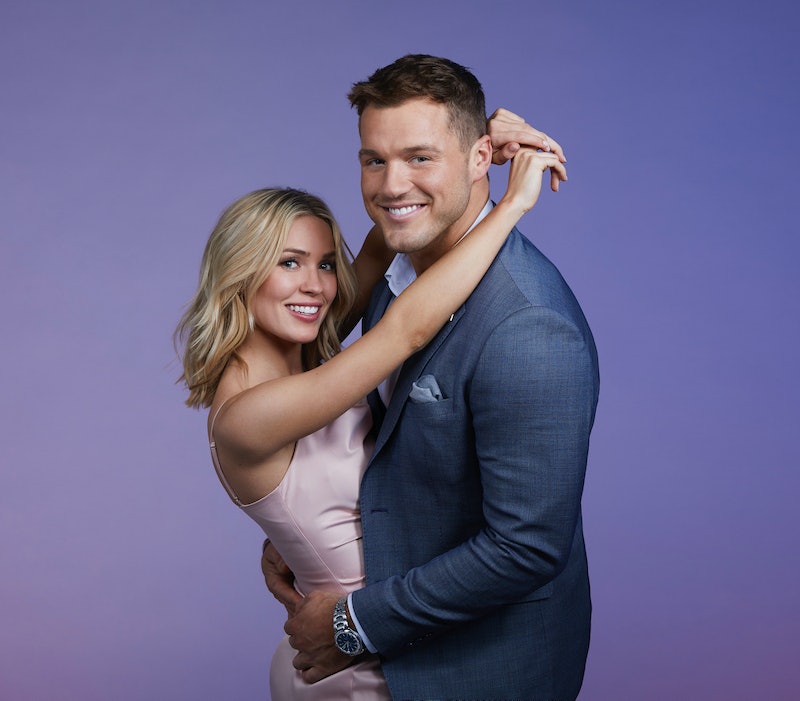 When The Bachelor's season finale aired earlier this month, both Cassie Randolph and Colton Underwood made it very clear that they'd be taking things at their own pace — and that meant that there was no shiny Neil Lane engagement ring at the end of the show for fans to gush over, like there normally is. But Colton and Cassie just sported new hockey jerseys that offered up a clue that they might actually be planning to spend the rest of their lives together anyway, despite the fact that they didn't get engaged on The Bachelor.

If you've been following along with this couple's post-show adventures, you probably already know that they spent their weekend in Las Vegas, and that included taking in a hockey game. They watched the Vegas Golden Knights play the Detroit Red Wings at the T-Mobile Arena on Saturday night, and Colton shared the sweetest photo of the two of them watching the game while wearing the sweetest custom jerseys ever.

Because not only did Colton's jersey say "Underwood," but Cassie's said "Future Mrs." And no, it doesn't seem to mean that Colton and Cassie got engaged in Vegas... but it is a really sweet way to acknowledge their relationship and how serious it's become. Plus, the photo itself is actually pretty cute.

Engagement is something that Cassie and Colton have talked about before, even if it's not a step they're ready to take just yet. Talking to People earlier this month, Cassie said she's "excited to get to that point," and Colton said engagement is definitely in the cards for them.

"She doesn’t have a ring on her finger yet. But she will, one day," he told the magazine.

Earlier in their trip to Sin City, Colton shared a photo of him and Cassie at their hotel, where they both looked super pumped to be starting off their Vegas weekend, and the fun only continued from there.

If the Mrs. Jersey wasn't cute enough for you, this next Instagram post ought to do the trick. After their hockey game, Colton shared a video of him and Cassie dancing to Brett Young's song, "In Case You Didn't Know," and this video has everything. Not only is Colton singing the words to Cassie as they dance, but he also stops to twirl her at one point. Seriously, it's so adorable.

Watching the end of The Bachelor — and what their time in Portugal was like for Cassie and Colton — was a little bit brutal at times, so it's really good to see this couple get their happy ending and live their lives like any normal couple would. You know, even if a lot of normal couples wouldn't necessarily get to jet off to Vegas for a weekend.

Cassie and Colton aren't engaged yet, but it definitely seems like this relationship is something they're taking seriously, and engagement is what they're working toward. For now, they seem perfectly happy to be dating and enjoying their time together, especially since their relationship can finally be public, and isn't that what really matters?