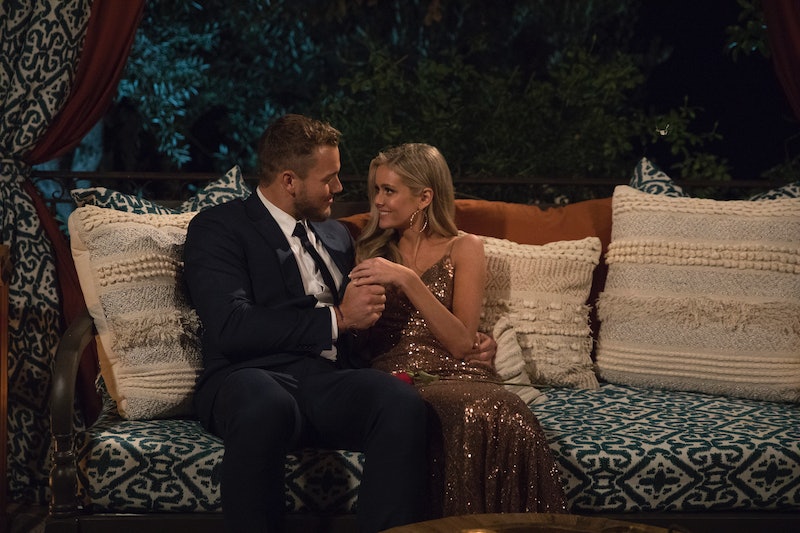 Hannah G. has been a front runner on The Bachelor since the very beginning — Colton Underwood did give her the first impression rose, after all. And on Monday night's episode, her chemistry with Colton on their one-on-one date was undeniable, although it did leave fans wanting more. Colton and Hannah G.'s PDA practically took over their Bachelor massage date, and fans are a little bummed that they didn't get more of an opportunity to get to know Hannah better during the date, like they have with other contestants this season.

Once Colton and his contestants made it to Vietnam, Hannah G. was the first to snag a one-on-one, and that meant they spent the day being massaged and given spa treatments, followed up by time in an outdoor shower and in a hot tub. It was a very romantic day, which led to a lot of romantic things... AKA pretty much constant making out. It stands to reason that kissing isn't the only thing that Hannah and Colton did all day, but that's the only thing that the cameras showed, and fans have taken to Twitter to share that they are disappointed with the way that things played out.

A lot of people pointed out the fact that Colton and Hannah barely talked:

It's true — the date didn't show a lot of their conversation at all. Most of their date that fans watched at home was totally nonverbal (minus Colton's awkward joke about wanting to eat Hannah's sushi roll) and that meant that there wasn't much of a chance to learn anything new about her that she hadn't already shared before, which wasn't much, since as she said herself, she's never been much for opening up.

The little bit of intel Hannah did share about herself came during the dinner portion of their date, after the massages and spa treatments (and consequentially, the PDA) were over. She opened up about how life changing her parents' divorce was for her, which was something that Colton could identify with. They seemed to connect over that, and by the end of the date, Colton had decided to give her the date rose, so things went well. But why? The producers are obviously setting her up to be a frontrunner, but they're not giving us a lot to root before aside from their obviously shared chemistry.

That seems to be the piece that's missing from the date overall — why their connection is so strong. There had to be conversation that happened that everyone watching at home didn't see, right? And for the show to make sense (especially if Hannah makes it all the way), it's important to know why Colton feels that connection because of things other than physical attraction and PDA sessions.

Even if a lot of their connection happened off screen, it's clear that Hannah's already a front runner in Colton's eyes, so it'll be interesting to see where things between them go from here. He's said on more than one occasion that she reminds him of "home," and that quality could definitely end up making her final rose material if their relationship keeps progressing.