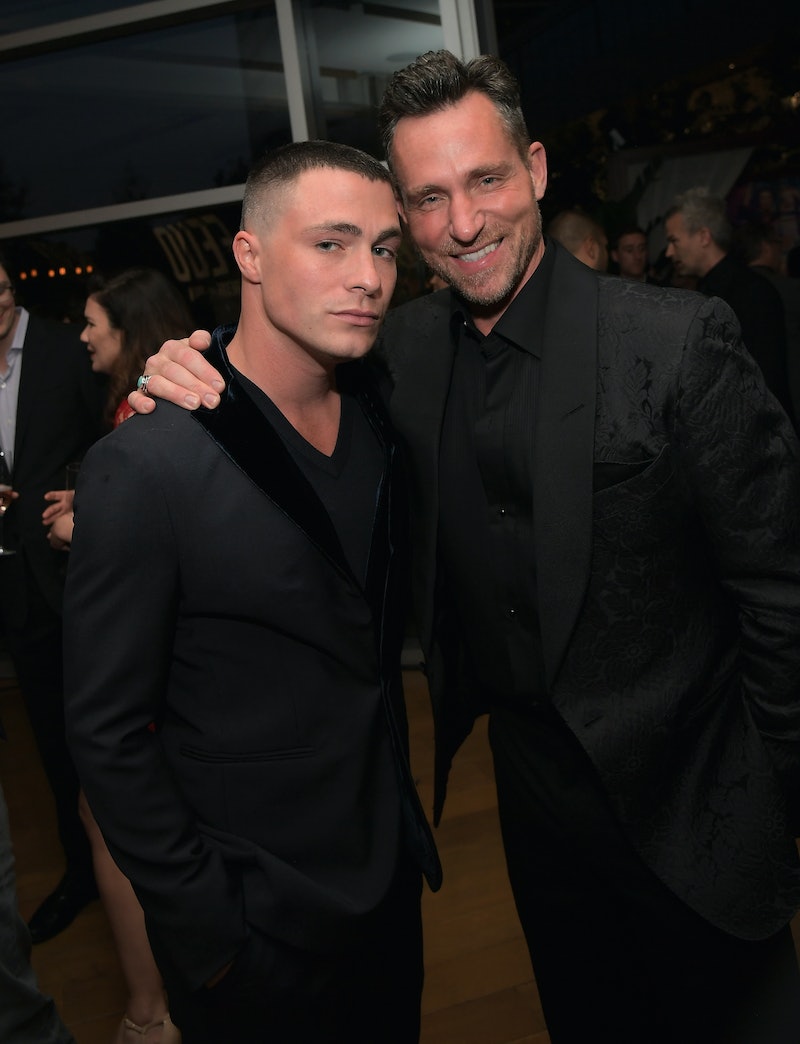 After six month of marriage, TMZ is reporting that actor Colton Haynes and Jeff Leatham are splitting up. Though neither party has issued a statement confirming that the relationship has come to an end — or that they are seeking legal separation or divorce — Haynes has indicated that there's been trouble in paradise through his Instagram and a new song he's shared publicly. Bustle has reached out to Haynes and Leatham for comment, but did not receive a response at the time of publication.

Haynes and Leatham, a celebrity floral designer, seemed to have a star-studded fairytale romance. When they got engaged in March 2017, there were fireworks and Cher even recorded a video for the occasion. The two wed shortly after in October 2017, in a ceremony officiated by the one and only Kris Jenner. Other attendees included Sofia Vergara, Billie Lourd, Jesse Tyler Ferguson, and former first kid Chelsea Clinton. In a video of the event Haynes posted on his YouTube page, tears were streaming heavily as they said their vows.

Now, however, six months after that extravagant occasion, the Arrow actor is using his YouTube channel to share less joyful content. As People reports, Haynes posted the audio of a song on Thursday, May 3 on the platform. The acoustic song is titled "Man It Sucks." The actor wrote and sung the song, which has a sorrowful, country vibe to it.

The song is full of lyrics that suggest the end of a relationship, with Haynes singing about coming to the realization that "love was lost." Early on he croons, "We’re crying in our bed and making our way to the floor / Man it sucks." In the next verse, he sings:

I follow you around the world just to be left alone

And man it sucks.

However, the lyrics also leave room for the singer to be the one at fault, with Haynes singing "maybe it was me" and "high all day and night, just to make things right," but in the next verse he sings, "I said I loved you despite the cheating drama."

Near the end, Haynes has a meta moment, as he sings:

That I’m even wasting time writing this song

Though Haynes has not explicitly said the song is about Leathan, the timing is particularly suspicious with some recent Instagram activity.

Per People, Haynes has recently deleted many of the Instagram pictures of Leatham from his account. After the purge, the most recent picture of the duo together is one with them standing in a heart at sunset, celebrating their anniversary in January (above). He has also dropped the word "husband" from his official bio and has gone back to listing his name as "Colton Haynes" as opposed to his hyphenated married name, “Colton Haynes-Leatham.”

Meanwhile, Leatham's Instagram still lists "Haynes-Leatham" as his last name. Though his social media account is mostly dedicated to pictures of flower designs he's created, his last post about his husband was shared just a month ago. The post was of Haynes dancing with his late mother, who recently died in March of complications with her liver.

Haynes, who rose to fame in MTV's Teen Wolf series, opened up publicly about his sexuality in 2016. He revealed he was in a relationship with Leatham on Valentine's Day 2017.

An "inside source" told Us Weekly that they "have been having relationship issues since a couple months after the wedding." However, neither party has publicly addressed the reports.