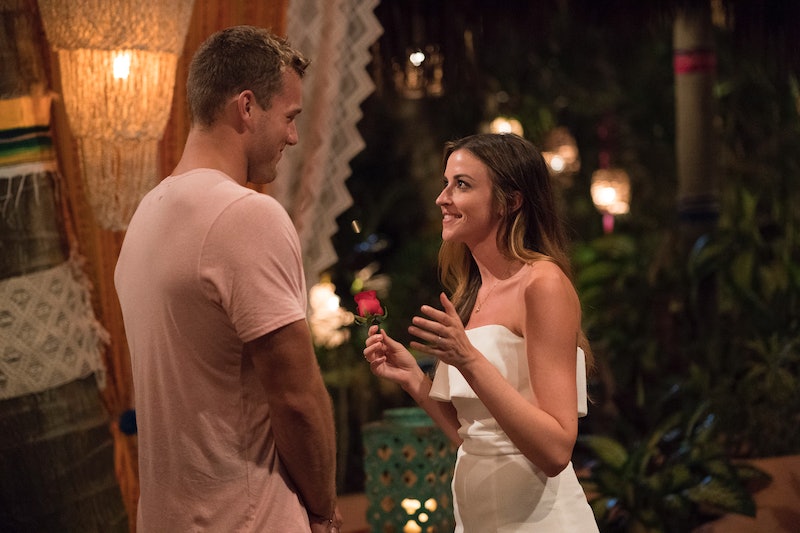 It's been a while since since Bachelor in Paradise ended in September and there's been a Bachelor drought ever since. But now the show is back with Colton as the new leading man. And in case you forgot what Colton's path to becoming the Bachelor was, the show offers a helpful recap of Colton's love journey on Becca's Bachelorette season. But Colton's The Bachelor premiere ignores that he dated Tia on Bachelor in Paradise even more recently. It's kind of odd.

The requisite premiere package about Colton's life shows baby pics of a young midwestern boy. Then it shows his success in the NFL. And then it shows him get his heart broken by Becca right before he was about to come to terms with losing his virginity with her in the Fantasy Suites. And then the show transitions into Colton meeting his 30 contestants. But...there's no mention of him even going on Bachelor in Paradise let alone dating Tia.

The Tia situation is sticky because she and Colton had a brief thing before he went on Becca's season — and Becca and Tia were friends. But Becca was OK with their past, because both Tia and Colton assured her it was a brief thing that didn't mean much. But then, after hometown dates, Tia changed her mind. She confronted Becca about how she still had feelings for Colton. No surprises that Becca sent him packing that same week.

But even as Colton claimed all season that he didn't want to date Tia, Becca's season ended with her having sent him home. After, Colton went on Bachelor in Paradise... where he dated Tia and things seemed pretty legit for a little bit on that beach. Ultimately things didn't work out for the couple, though, because Colton wasn't feeling things and Tia was. They were just on two different pages, and Tia was frustrated because Colton couldn't really explain why things weren't working for him; they just weren't. Tia left the show wishing Colton would be able to better figure out what he was looking for so another woman wouldn't fall more for him than he would for her in the future.

And therein lies the probable reason that Tia and Colton's romance was glossed over by The Bachelor premiere. It's not a good look to have a Bachelor who doesn't know what he wants, because the whole show is about finding love in a short amount of time. There's not a lot of wiggle room for figuring out who you are and want you want along the way. It looks much better to have Colton's journey be that he was ready to go all in with Becca but that she was the one who broke his heart.

Whether that's the real reason or not, it's worth noting that break up or not, Tia and Colton remain friends. When he was announced as the Bachelor, Tia wished him well on Twitter and told Extra TV, "I think we'll always be supportive of each other and that's comforting to know that we'll always be there for each other."

And for eagle-eared viewers out there, you may have noticed that there was one brief reference to Tia on the premiere. When Hannah B. got out of the limo, she asked Colton to guess where she was from based on her accent. "Not Arkansas?" he said with what seemed like a bit of concern in his voice since that's where Tia was from. Hannah reassured him, "No, you're good. Alabama."

It seems like Arkansas is a small place, since both Tia and Raven Gates from Nick Viall's season were from there and knew each other. So perhaps Colton was just afraid of running into a friend of Tia's on his season. But, as The Bachelor premiere clearly illustrated, his Tia days are far behind him. So far that their relationship probably won't even going to get much more of a mention than that little Arkansas joke.