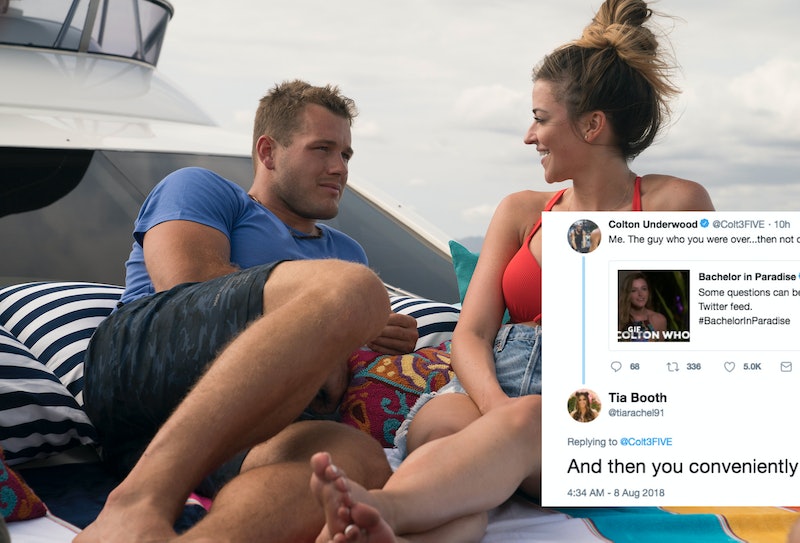 There's no doubt about it, Colton Underwood was the most-talked-about person during the Bachelor in Paradise Season 5 premiere. And it wasn't just Tia Booth who had Colton on her mind. Pretty much everyone on the show and the fans on Twitter were talking about Colton. Not only that, but Colton and Tia had a hilarious Twitter exchange about all of the Bachelor in Paradise drama after the episode.

Tia went into Paradise hoping to see Colton. Every time she heard someone walking down those stairs, she couldn't help looking up hoping to see him. Tia had no problem admitting that Colton was on her mind, but he did not show up.... until the day after Tia went on a date with Chris. As they say, the devil works hard, but the Bachelor in Paradise production team works harder.

Of course, Tia got the first date card when she was the only person who did not want it. Of course Colton showed up right after Tia was making out with Chris post-date. This is not their first rodeo. This is Season 5, after all. Sure, there were some twists and turns, but pretty much everyone saw them coming and could not help joking about the scenario — even Tia and Colton themselves.

It all started when the official Bachelor in Paradise account tweeted a GIF from the episode with Tia asking, "Colton who?" Colton quoted that tweet and added, "Me. The guy who you were over...then not over...then over, but maybe not?" That's a very accurate description, but was it harsh? Apparently not, since Tia chimed in with her own response. Clearly they are both in on the joke.

Tia responded, "And then you conveniently show up..." And it all concluded with Colton sending her a kissing face emoji.

Apparently these two are on good terms. Are they actually a couple? That remains to be seen, but at the very least, they're social media friends and they're entertaining us all with their tweets.

Aside from her conversation with Colton, Tia couldn't help poking fun at herself by tweeting, "Hi Colton!! 5 hours after I got home from my date with @ChrisRandone."

But Tia and Colton aren't the only people joking about the Season 5 premiere episode. The viewers had a lot to tweet as well.