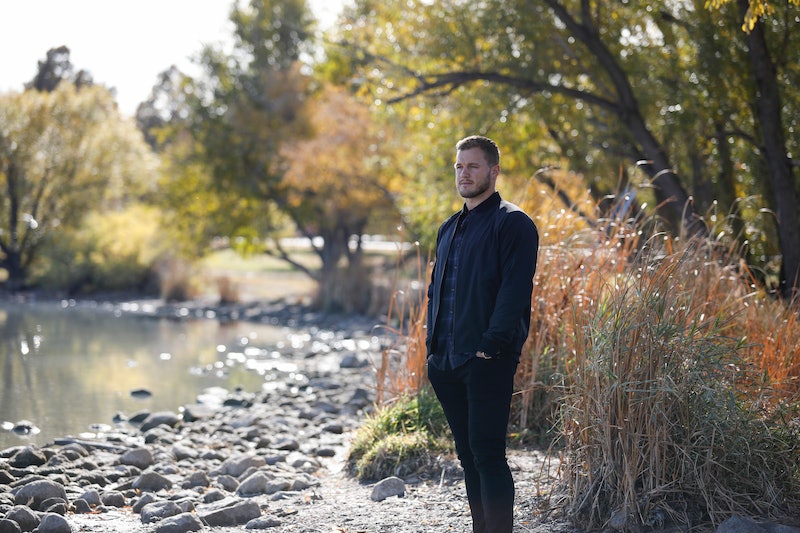 Tonight, the moment that every reality TV fan has been waiting for finally occurred. Colton jumped the fence on The Bachelor. After a season of speculation, we finally know why Colton has to make such a dramatic escape — Cassie chooses to leave the show, and he's heartbroken. It's kind of devastating to watch, and tweets about Colton's fence jump show that this season of The Bachelor has actually gone off the rails in a huge way.

After a tearful and stressful conversation, during which Colton and Cassie both wrestle with Cassie leaving the show, she says she simply can't match the feelings he has. He says he doesn't need an engagement, that he wants to be with her no matter what, even if they simply continue dating past the finale of the show.

We've never really had a situation in which the lead tells a finalist that he's dead set on being with her at the end of the show, regardless of the two other contestants that still wait in the wings. It's a bit unheard of, and would have been a huge talking point on its own even if things didn't get more bananas from there. But as Chris Harrison so often promises, this is turning out to be the wildest season of The Bachelor to date.

Cassie leaves, and Colton follows suit in the most emotional of fashions. Fans were bowled over.

The whole thing ended in a cliffhanger, making things even more dramatic and causing everyone to wonder what the hell is actually going to happen now that Colton has officially abandoned the show.

And as a few people readily pointed out, Colton and Cassie aren't the only ones affected by the fence jump. Will there be justice for Hannah, who got less screen time than the fence this week?

No one knows how Colton proceeds from here, it seems impossible that he goes back to face Hannah and Tayshia, considering he just spent the entire back half of this episode professing his undying love for Cassie, and even saying he spent dates with the other women thinking of her. It'd be extremely shady and disingenuous for Colton to simply settle for someone who would obviously be his second choice, and neither party would deserve that.

Who knows what he'll do? I'm guessing that once the camera crew and Chris Harrison return from their incredibly dramatic search throughout California, hopefully with Colton in tow, our unruly lead will have to let these two other women down easy. That's not gonna feel great, but he has to follow his heart.

As for Cassie, she didn't seem very settled by Colton's assurances that they could take things slow and avoid rushing into an engagement. But perhaps she was just spooked by her dad's abrupt arrival in Portugal, or maybe she felt pressured since the cameras all around her are basically there for the sole purpose of capturing Colton down on one knee. Bachelor Nation won't rest easy until this season is put to rest for good, but at least we'll have Twitter to keep each other company as we wonder.