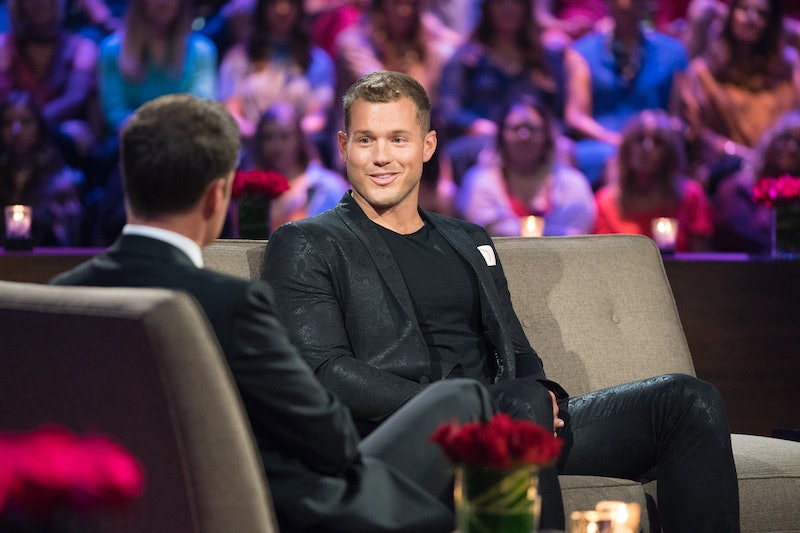 Colton Underwood instantly charmed Becca on The Bachelorette, but he was sent home right after Becca met his family. Was it something they said? Well, kind of — Colton's dad told Becca to dump Colton if she had an inkling that he wasn't the one for her, and, not being sure about that, she did. It was a kindness, really — not a betrayal. Colton didn't get along with everyone in the house, and now, on Men Tell All, he's telling his side of the story. Colton's Men Tell All tweets were, uh, pretty enlightening.

Colton seems like a nice guy and everything, but he was the source of the first real drama in the house. Tia, who was on Arie's season of The Bachelor with Becca, admitted to Becca that she and Colton dated a little bit before The Bachelorette and that it seemed like Colton was going on The Bachelorette because Tia was kind of a lock for the role before Arie dumped Becca (Tia didn't say that to Becca, but duh). Colton told Becca that it wasn't really a thing with Tia and that he wanted to come on the show for Becca. Yadda, yadda, yadda.

But oh — wait. There was no "yadda, yadda, yadda" in the traditional Seinfeld sense (that's sex) because Colton also admitted on the show that he is a virgin. It's not a big deal at all, and it's really not any of our business, and Colton recently told Cosmopolitan that it was really hard for him to talk about.

“I think that’s something that for me was the hardest thing I’ve ever had to do in my life,” he said. “I’ve gone through a lot with that. It’s hard for me to even talk about it right now. But growing up, being an athlete, it’s something that I was ashamed of because it was so openly talked about in our community.”

Colton went through the wringer on The Bachelorette, and now, he's ready to talk about it all... in the way of live-tweeting the Men Tell All special. And he's not holding back. Know how I know?

What Jean Blanc said sucked, but why even bother to get the last word in when you're right? In an interview with Entertainment Tonight, Colton said, "Some comments caught me off guard and really triggered something in me and I felt like I spoke my truth tonight. [It] took a lot of self-restraint to stay seated [after Jean Blanc's comment]."

He Also Felt The Need To Explain Himself

And Had Some Words About His Cast Mates

At the end of the show, he also posted to Instagram, writing that "behind his smile" he was hiding loads of insecurities and vulnerabilities.

Reality shows are hard, and it's really hard to be genuine. At least he's trying. Colton had a lot of tough conversations on The Bachelorette, and even a jaded Bachelor writer like me can feel for the guy — he's so clearly trying to bare his soul to America (maybe he's gunning for the Bachelor role?) that it's hard to discount him. Colton is just trying to tell his side of the story, and Twitter is helping him do that.